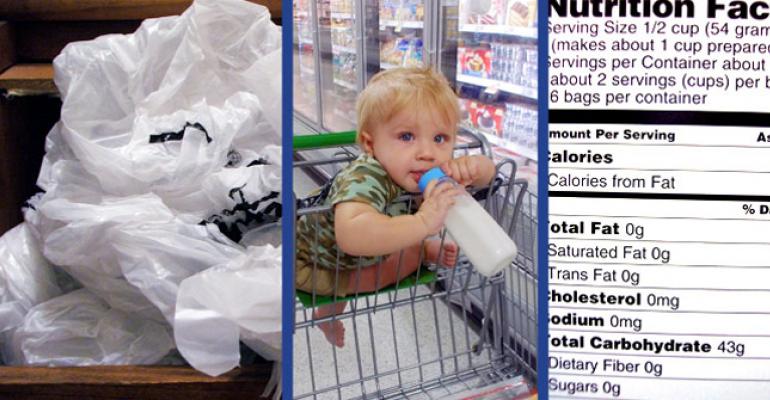 &quot;The merger completes our portfolio and allows us to speak for the kind of retailers many legislators really care about &mdash; the mom-and-pop businesses in the communities they represent, the ones they see and care about.&quot; &mdash;RON FONG, California Grocers Association

CGA has traditionally voiced the viewpoints of the larger operators in the state, while CIGA spoke for smaller-store operators.

“But the merger completes our portfolio and allows us to speak for the kind of retailers many legislators really care about — the mom-and-pop businesses in the communities they represent, the ones they see and care about,” Ron Fong, CGA president, told SN.

“When these legislators look at a proposed bill, they ask themselves how it will affect the small grocers in their communities. In fact, there’s one state senator who’s been in the legislature for 20 years, and whenever we talk to him about why some proposed bill is challenging for our industry, he always asks how it will affect the single-store operator in the area he represents — and now we can speak for that operator and others like him — and we can speak more effectively with a single voice rather than in two voices with two sets of lobbyists.”

Still missing from the retailers CGA represents are convenience stores, mass merchandisers, dollar stores and chain drug-stores, “though those are areas we are pursuing,” Fong said.

Reviewing CGA’s agenda over the past few months, Fong cited the following examples:

Senate Bill 270, which would impose a ban on single-use carryout bags throughout California — “legislation we support because it seeks to set a statewide standard,” Fong said.

Approximately 105 California cities have already passed local laws banning single-use plastic bags, he pointed out, “and SB 270 pretty much calls for what most of those individual local bills say — banning plastic and imposing a 10-cent charge for paper bags — though there are one or two municipalities that ban both plastic and paper and require reusables only.

“There’s been a lot of discussion among opponents of the proposed statewide law about the 10-cent charge —they argue grocers will get rich by imposing the fee — but we see the 10-cent charge as cost-recovery and as a dis-incentive to continue to use paper bags,” Fong said.

“This is a subject CGA has been tracking since 2006, and while we do not want a charge higher than 10 cents, which is the amount most local jurisdictions have approved, our experience across more than 100 jurisdictions shows us a mandated charge is necessary to meet objectives of reducing single-use bags.”

According to a study in San Jose, which passed legislation about 18 months ago, the number of single bags per customer per store visit has fallen from three to 0.3; while plastic-bag litter is down 89% in storm drains, 60% in creeks and sewers and 59% in streets and neighborhoods.

Fong said he expects SB 270 to pass in both the state Senate and Assembly before the session concludes — in large part because one of the bill’s co-authors is state Sen. Kevin De Leon, who’s now the Senate’s president pro tem, “which gives it a higher profile.” If it is approved, it will go to Gov. Jerry Brown, who will have 30 days to sign or veto it.

According to Fong, Brown has been non-committal so far on whether he will sign it into law. “He’s said he will look at it when it comes to his desk, but if he does sign it, it would take effect next Jan. 1 for most supermarkets and a bit later for smaller operators.”

The issuance of new licenses under the WIC program, which was reinstated in California in June after being halted in 2011 because of alleged fraud among some non-grocer licensees, Fong said.

The Women, Infants and Children program provides assistance to families that need baby formula, baby food and related items, plus staples like eggs, cereal and cheese.

Three years ago the USDA, which oversees WIC, stopped granting licenses to all new applicants — including supermarkets — because of perceived abuses by liquor stores, furniture stores and other businesses that put in small quantities of food items and then charged exorbitant prices for the products, Fong pointed out.

“The moratorium spoiled the WIC program for legitimate licensees, so even new supermarkets couldn’t get licenses,” Fong said. “That meant the industry suffered because consumers were confused as to why one supermarket accepted their WIC coupons and another store in the same chain, which may have opened during the moratorium, did not.

“It took nearly three years for the government to eliminate the fraud, but the moratorium was finally lifted on June 1, which allows legitimate food operators to get licenses.”

Fong said the association was unable to estimate how many markets were denied licenses during the moratorium; however, he noted that 130 supermarkets that opened or changed ownership during the month of June alone were approved for WIC licenses.

CGA lobbied against the moratorium at the state and federal level, leading groups of retailers to meet several times with Kevin Concannon, undersecretary for food, nutrition and consumer services for the USDA, to explain how the situation was impacting the grocery industry.

CGA opposed Senate Bill 1000, which would have required manufacturers of any beverage with sweeteners totaling 75 calories or more to indicate that on package labels.

“We opposed it because it would have been California-specific,” Fong said.

The proposal failed to get approval in committee at the end of June and is dead for the current session, he pointed out.

SB 1381, which would have required GMO labeling on certain products, was defeated in May. “We opposed that one because it was also California-specific and also because it said retailers would be liable if a product on their shelves was not properly labeled” Fong explained.

CGA has been able to work well over the last few years with the California legislature, Fong said — despite its large Democratic majority, which had been a super-majority that controlled two-thirds of the body before three Democratic senators took leaves of absences for personal reasons.

“The super-majority really becomes an issue primarily on budget matters because it means the Democrats can pass a budget without any Republican input, and CGA doesn’t get involved in budget matters,” Fong explained.

“But CGA has been able to work with the Democratic majority on bills that we care about.”

Asked about its relations with the Democratic governor, Fong said, “We believe Gov. Brown has been very fair to the grocery industry during his current term. There were some bills he signed we didn’t like, but he also vetoed some we opposed, so we believe he has been fair to us.”