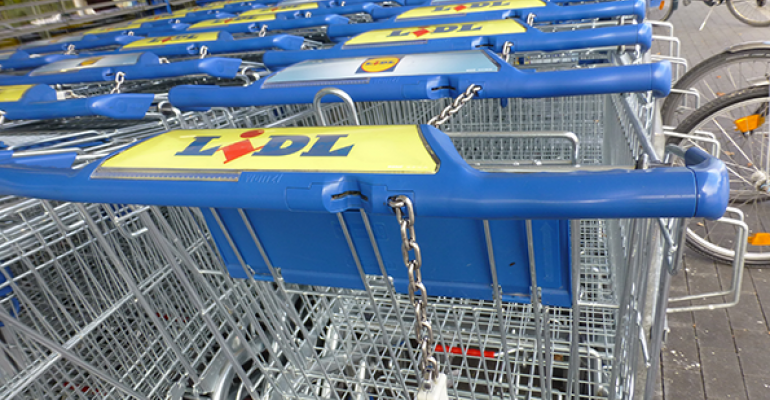 Signs are increasing that German retailer Schwarz Group is speeding up a U.S. entry for its Lidl discount stores, including multiple job postings, and reports that the retailer is establishing new U.S. offices and meeting with suppliers in Europe to determine their ability to distribute in the U.S.

As reported previously in SN, Schwarz officials confirmed their intention to expand stateside with a target date of 2018. The group, whose U.S. arm is doing business under the name MGP Retail Consulting, is targeting middle Atlantic states for sites and had tasked leaders from its division in Ireland to lead a feasibility study, and established offices in Arlington, Va.

Several recent events suggest that timeline may be conservative. The company recently began advertising for meat, dairy and produce buyers, as well as construction and real estate positions and an executive assistant fluent in German.

Officials of MGL on Friday declined comment on SN's specific questions but issued the following statement: "As has been reported, Lidl is in the early stages of preparation to operate in the United States. We are taking steps toward that effort. However, we are not able to comment on any particular transaction at this time.”

The Washington Business Journal this week reported that MGP has invested $56.6 million in a new headquarters building including a test kitchen, also in Arlington, Va. Reports out of Europe said the company was meeting with suppliers to determine which can serve the company stateside, and had launched training for 200 employees in connection with the expansion.

Various reports in recent months have suggested the chain was identifying store sites in Virginia and Pennsylvania and most recently, a distribution hub in North Carolina. Reports say the group would need about 100 sites to meet scale requirements.

Lidl is a $98 billion limited assortment discounter with a format similar to its German rival Aldi. The latter, which has operated in the U.S. since 1976, has stepped up expansion including the recent acquisition of 66 sites in New Jersey, Pennsylvania and Ohio from Bottom Dollar. Aldi said recently it would reopen 30 of those locations as Aldi stores.

Sources told SN the company was seeking U.S. expansion in order to maintain growth trajectory, having reached saturation in many of 26 countries where it currently operates stores.

NOTE: This story was updated Friday afternoon to include the statement from MGL Retail.