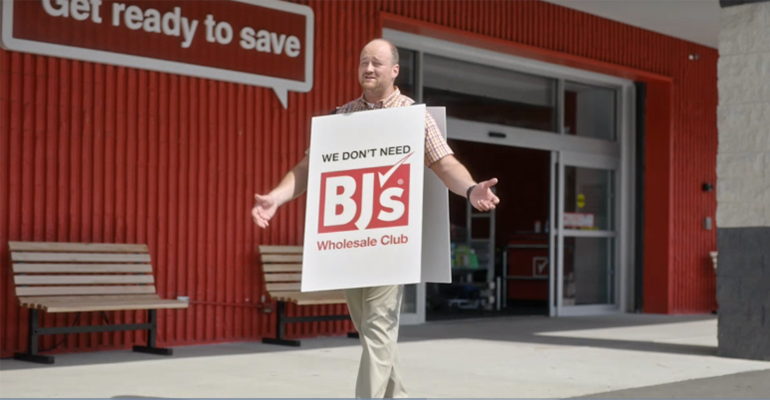 BJ’s said Monday that the campaign — including television, radio, digital and social media, and out-of-home ads — highlights attributes that differentiate the warehouse club chain from its rivals, notably everyday grocery pricing that the company touts as 25% less than supermarket prices on national brands.

The humorous TV spots and videos center on a character named Frank, who tries to convince other consumers that they don’t need to join BJ’s. But in giving his “reasons,” Frank actually ends up spotlighting BJ’s benefits, which he doesn’t realize have convinced his wife Brenda to become a member.

For example, Frank protests against BJ’s and tells people why they don’t need to join in homemade videos where he trolls the retailer’s social media campaign, in the club parking lot where he tries to rally shoppers not to sign up, in front of highway billboards advertising BJ’s and at a BJ’s fuel station where he taunts another customer about all of the low-price gas he’s getting. Meanwhile, his wife is shown shopping for groceries at BJ’s and talking about and taking advantage of the benefits its clubs have to offer.

The TV and video commercials launched today in metropolitan Detroit ahead of the opening of BJ’s first two locations in Michigan. Clubs are slated to open their doors to the public in Taylor and Madison Heights later this fall.

“Consumers have more shopping options than ever, and we know some may not be looking for another wholesale club,” Lee Delaney, executive vice president and chief commercial officer at BJ’s, said in a statement. “But we know that once shoppers realize that BJ’s Wholesale Club can save them up to 25% off grocery store prices every day, they’ll be eager to join. Our new campaign builds on that promise, showcasing our fresh take on the wholesale club and all of the reasons to join BJ’s.”

In the awareness-focused ad campaign, BJ’s said the reasons to become a member — which Frank brushes off as “who needs” them — include a 25% everyday savings on essential food and nonfood items; a bigger assortment of fresh food than other warehouse clubs, including produce, meat, deli and bakery items; and being the only warehouse club that accepts all manufacturers’ coupons on top of BJ’s coupons. The 25% savings is based on a basket of 100 national-brand household staples, on an unpromoted unit-price basis, compared the pricing of four leading grocery chains in BJ’s trade areas, the company said.

BJ’s also points out in the commercials that members pay as little as two cents per gallon via the BJ’s Gas Savings Program, and “Everyday ClubVeniences” include shopping at BJs.com, in-club pickup, same-day grocery delivery, digital coupons and the BJ’s Stocked program.

“BJ’s Wholesale Club is bringing consumers a fresh take on the wholesale club experience,” according to Terri Meyer, co-founder and co-CEO of Terri & Sandy, the creative agency that developed the ad campaign. “So we wanted work that would be just as unexpected as what BJ’s Wholesale Club has to offer. The result is an entertaining anti-spokesperson, whose protests will make consumers question why they haven't joined yet.”

The opening of the Taylor and Madison Heights, Mich., warehouse clubs will mark the 17th state with BJ’s locations. Overall, the Westborough, Mass.-based currently operates 217 clubs and 140 BJ's Gas stations.