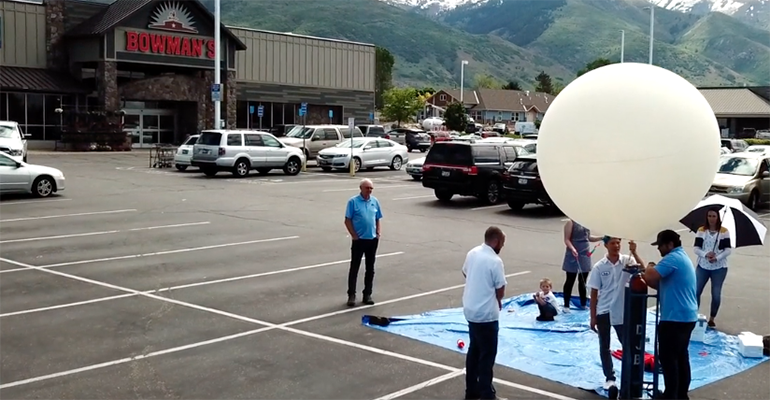 Bowman’s Market launched a weather balloon on May 29 as a test run for the doughnut launch scheduled for National Doughnut Day.
News>Marketing

Bowman’s Market, an independent grocer in Kaysville, Utah, plans to launch one of its doughnuts made from scratch into space on June 7 to celebrate National Doughnut Day.

The doughnut, which the retailer says may provide the only welcome “hole” in the ozone layer, will be placed on a platform attached to a box containing camera and GPS equipment. The box, or payload, is attached to an open parachute. The payload and parachute are fastened to a weather balloon filled with helium. The balloon rises to a height of approximately 22 miles until changes in air pressure eventually cause the balloon to burst. The parachute then takes over as the doughnut makes its way back to Earth.

The idea of a doughnut launch originated with Bowman’s baker/flight director Noah Wenzel. Wenzel became familiar with a similar effort in Europe and thought his doughnuts deserved an equal shot at stardom.

“It’s been an extremely rewarding project so far,” he said. “We view ourselves as a unique store and launching a doughnut into space matches up with our mission to do fun and extraordinary things in our community.”

Related: Bakeries get in on the big reveal

The launch will take place at 10 a.m. in the store parking lot, which is the same location where Wenzel launched a weather balloon on May 29 as a test run. Tracking the doughnut is possible every 60 seconds via on-board GPS. Those interested in following the doughnut’s flight path can do so at bowmansmarket.com.

Along with tracking the doughnut’s progress online, store customers can help name the doughnut, attend the launch live on June 7, and participate in a contest to guess where the doughnut will land. The store is creating a promotional video and will also have a coloring contest for children.

Bowman’s Market opened its doors in 1913 in the small community of Kaysville. The present Bowman's Market at 326 North Main Street was built in 1996.

National Doughnut Day is celebrated in the United States on the first Friday of June of each year, following the tradition created by The Salvation Army in Chicago in 1938 to honor those of their members who served doughnuts to soldiers during World War I.