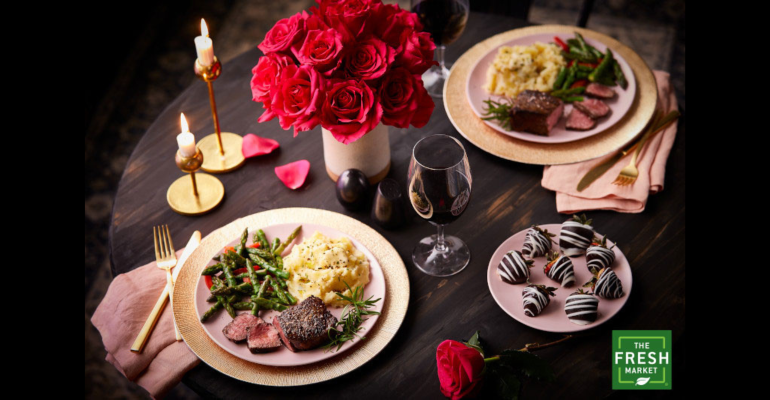 Grow your conversion rates by 300%? Here’s how The Fresh Market’s doing it.

That’s where The Fresh Market is placing its bets, using a shoppable livestream to promote its Valentine’s Day offerings, focused on meal prep for the February 14 holiday.

“Shoppable videos are a large component of our retail media strategy,” Miller said. “The shoppable livestreams, which range from twenty to forty-five minutes, provide a unique shopping experience in the digital space that allows us to expand our audience reach and attract new customers to The Fresh Market.”

Participants were able to buy products during the 45-minute event (which is also available on replay) and could also interact and engage through polls and live chat, Miller said.

The Valentine’s Day event is The Fresh Market’s fifth shoppable livestream in the last nine months. Livestreams in 2022 included the opening of a new store in Palm Beach Gardens, Fla., along with events centered around The Fresh Market’s 40th anniversary, Thanksgiving, and the holiday season.

The combined viewership of The Fresh Market’s first four livestreams exceeded 2 million views, said Miller, who added that the conversion rates of the special occasion meals featured in the livestreams were more than 300% greater than the retailer’s traditional digital advertising results.

A key objective of the livestreams is to reach existing and new guests through a new medium, Miller said, adding that “we’re providing our guests the ability to be inspired and shop online by bringing our products to life through the power of shoppertainment.”

Last August, The Fresh Market announced that it had surpassed 365 days of total watch time for its video content, including all short-form, shoppable video and live commerce content, across the company's owned media channels that are supported by the Firework shoppable video platform.

In addition to Thursday’s shopper livestream, The Fresh Market is spotlighting fully prepped, read-to-cook meals that the company is positioning as Valentine’s Day options for couples or families.

Selections include a Valentine’s Meal for Two for $59.99, in which customers can chose among entrees that include premium choice chateaubriand cut filet mignon, lump crab cakes, and wild North Atlantic lobster tail.

A Valentine’s Prime Rib Meal for Two for $49.99 includes fully cooked prime rib, while the Valentine’s Day Brunch for 4 for $25 includes items like quiche Lorraine, and broccoli cheddar or spinach tomato quiche.

In addition, The Fresh Market is merchandising Sweetheart Ribeye, which is hand-cut and butterflied into the shape of a heart, as well as heart-shaped crab cakes.

Shoppers can order the selections online or in-store and pick up orders from February 10 to 14.

The Fresh Market operates about 160 stores in 22 states.