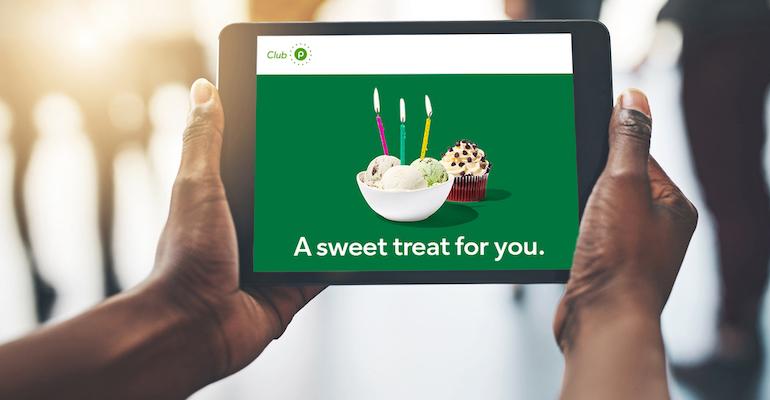 Kroger’s Smith’s banner ranked first in the supermarket category with an 8.38 score for its Smith’s Rewards World Elite Mastercard, followed by Sprouts at 7.90 for its mobile app, fellow Kroger Co. chain Mariano’s at 7.79 for its Mariano’s Rewards World Mastercard, Publix at 7.70 for its Club Publix program and ShopRite at 7.61 for its Price Plus Club, according to Newsweek’s Best Loyalty Programs list.

In all, 20 grocery store chains were on the list, including seven Kroger Co. banners. Rounding out the top 10 finishers were Kroger’s Fred Meyer at No. 6 for the Fred Meyer Rewards Elite Mastercard (7.58 score), Price Chopper at No. 7 for its AdvantEdge program (7.56), Winn-Dixie at No. 8 for Winn-Dixie Rewards (7.55), Kroger’s Fry’s Food Stores banner at No. 9 for the Fry’s Rewards World Elite Mastercard (7.47) and Giant Food at No. 10 for Giant Flexible Rewards (7.46). 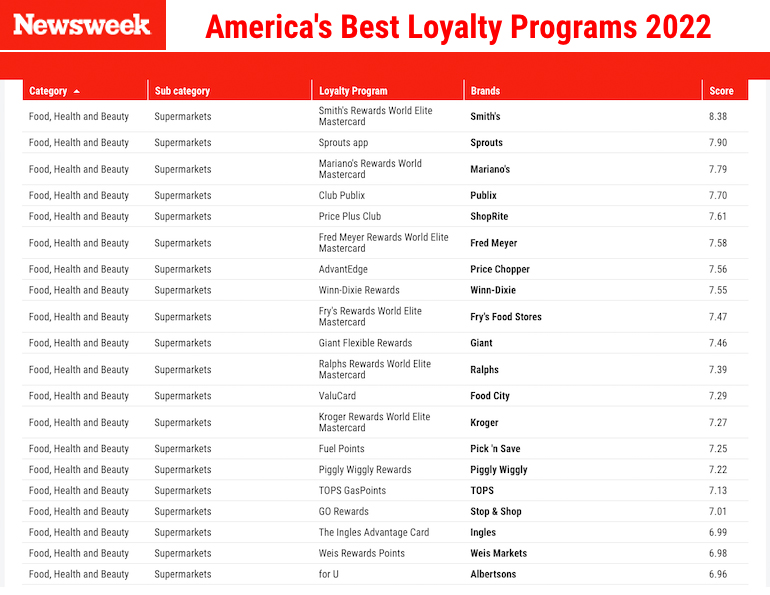 “Providing a pleasurable shopping experience extends beyond our aisles. Club Publix offers our customers a more personalized experience to meet their individual needs and preferences,” Maria Brous, director of communications at Publix, said in a statement on the Newsweek ranking. “We’re pleased to know our customers’ feedback reflects our goal of delivering more of what matters to them.” Overall, Publix operates 1,297 stores in Florida, Georgia, Alabama, Tennessee, South Carolina, North Carolina and Virginia.

Based on a survey of over 4,000 U.S. consumers enrolled in U.S. retailer or service provider programs, Newsweek’s 2022 America’s Best Loyalty Programs list ranks companies’ programs according to six criteria (in order of importance): recommendation to others, overall satisfaction, benefits, trust, customer support, and ease and enjoyment. The top finishers received above-average overall scores for their awarded loyalty programs. Overall, about 20,000 evaluations were collected on loyalty programs from retailers and service providers in 36 categories. Loyalty programs were defined as all reward programs that provided customers with a benefit when buying or using the products or services of the associated brands.

“By one estimate, the average U.S. household is enrolled in 18 different loyalty programs. The challenge for companies is not getting customers to sign up, but motivating them to become truly engaged program users,” Newsweek Global Editor In Chief Nancy Cooper wrote in the 2022 America’s Best Loyalty Programs report. “Research shows that consumers only actively use half of the plans they’re enrolled in. The challenge for consumers is to decide which of the crowd of programs vying for their attention are worthwhile.”

Big-box grocery retailers also made Newsweek’s list in the superstores and warehouse clubs category. They were led by Costco Wholesale at a score of 7.88 for its club membership, Sam’s Club at 7.84 for its Sam’s Club family program, Walmart at 6.77 for its Walmart Rewards Card, Target at 6.37 for its Target Circle program and Meijer at 5.85 for its mPerks program.

Supermarkets, too, accounted for four out of the five chains ranked in the pharmacies and drugstores category. They included Kroger at No. 1 for the Kroger Rewards World Elite Mastercard (7.98), ShopRite at No. 2 for its Price Plus Club (7.55), Giant Eagle at No. 3 for its Advantage Card (7.49), Publix at No. 4 for Club Publix (7.28) and CVS Pharmacy at No. 5 for its ExtraCare Pharmacy & Health Rewards (6.98).

“For brands, it’s a potentially huge payoff, since it’s far more expensive to get new customers than to keep existing ones, and loyalty program members tend to spend far more than nonmembers,” Cooper observed.

“Hanging onto customers has become even more critical during the pandemic, when a third of shoppers have indicated their willingness to switch brands,” she said.