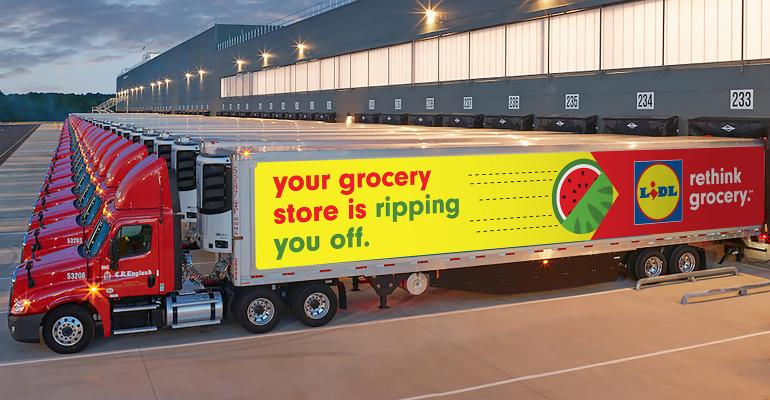 Discount grocer Lidl has unveiled a new multimedia ad campaign in the U.S. attacking traditional grocery practices as inefficient and costly to consumers.

In the first TV spot, a Vanhills worker is shown stacking apples in a giant pyramid while company owners and managers acknowledge the wastefulness of the practice. The ad cuts to a Lidl store, where placing boxes of apples that are “fresh from the farm” directly onto store shelves is shown to be the more cost-effective strategy, resulting in savings of “up to 50%.”

In one radio spot, an announcer asks a Vanhills Grocery owner if her stores could sell award-winning wines for under $10 per bottle, as Lidl does, and she replies that they could, “but we’d rather not.”

The campaign features the tag line, “Don’t let them waste your money.”

“This new campaign is designed to raise awareness about the costly inefficiencies of traditional supermarkets and the savings that Lidl’s streamlined approach brings to customers every day,” said Elina Elvholm, director of brand marketing at Lidl US. “When customers shop at Lidl, they experience less complexity, lower prices, and better-quality choices.”

In addition to its sharp focus on price, the campaign, which also includes online and truck ads, repeatedly touts Lidl’s quality and freshness. Traditional grocers — in the form of Vanhills Grocery — instead create an illusion of freshness with apple pyramids and signs in their produce departments stating that their produce is fresh.

The campaign launches as Germany-based Lidl, which has its U.S. headquarters in Arlington, Va., is rethinking its expansion strategy in the U.S. The chain began opening stores in several Mid-Atlantic markets last June with a goal of opening 100 in its first year, but the chain has reportedly delayed several new projects and slowed its new-store development.

Lidl currently has about 50 stores open in the U.S., with one new location set to open in April in Lexington, S.C., according to its website.

Digital customer engagement on the upswing at Coborn’s
Jan 28, 2021