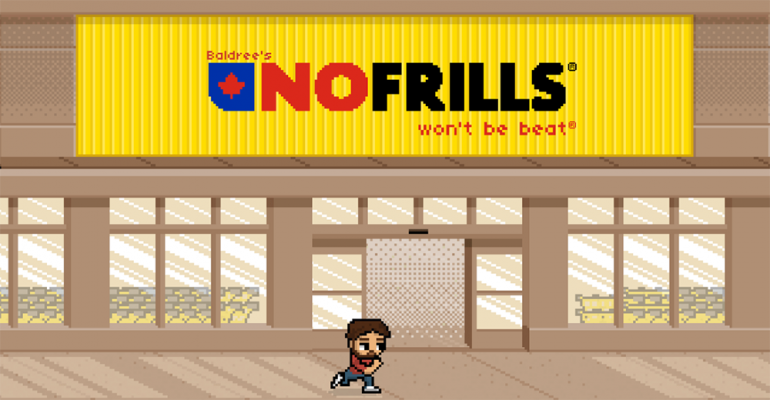 The video-game version of a No Frills store, as seen in "Hauler: Aisles of Glory."
News>Marketing

No Frills shoppers can earn rewards points in video game

Loblaw Cos.’ No Frills discount grocery chain is helping customers get game for the second year of its “Hauler” marketing campaign.

The web-based game — which customers can play on a smartphone, tablet or desktop PC — focuses on the in-store shopping experience. Customers train for their next shopping trip by running through an animated No Frills store, collecting points for “hauling” groceries and avoiding “unnecessary frills and obstacles” not commonly found at grocery stores “like diamonds, limousines and expensive speed boats,” the Brampton, Ontario-based retailer said. The player dashes between the different sections of the store, going through produce, center store, bakery, meat and even outside into the parking lot.

After the “virtual haul” is complete and the game ends, players can enter their PC Optimum card number to claim a daily reward of 500 PC Optimum points. The game will continue to reward points until 50 million PC Optimum points cumulatively have been rewarded to Canadians, No Frills said.

“Aisles of Glory” is part of the latest No Frills marketing campaign, which got under way last week. Along with the video game, this year’s “Hauler” campaign includes a new commercial — touting the new slogan, “The best haulers aren’t born; they’re made” — plus community events at local stores and new merchandise on Haulershop.com that’s slated to roll out in June.

The acclaimed “Hauler” campaign made its debut a year ago and champions No Frills shoppers as superheroes for buying groceries at the chain’s discounted prices. “Haulers” are defined as No Frills customers “who get a lot for a lot less.” Besides print advertising, last year’s marketing campaign spanned social, television, cinema and out-of-home media and included limited-edition merchandise sold on Haulershop.com, such as bright yellow “Hauler” T-shirts.

"Every major sport has a video game franchise, so why should hauling be any different?" Uwe Stueckmann, senior vice president of marketing at Loblaw Cos., asked in a statement. "The best haulers aren't born; they're made. This game is designed to let them practice before they head to No Frills for an epic haul."