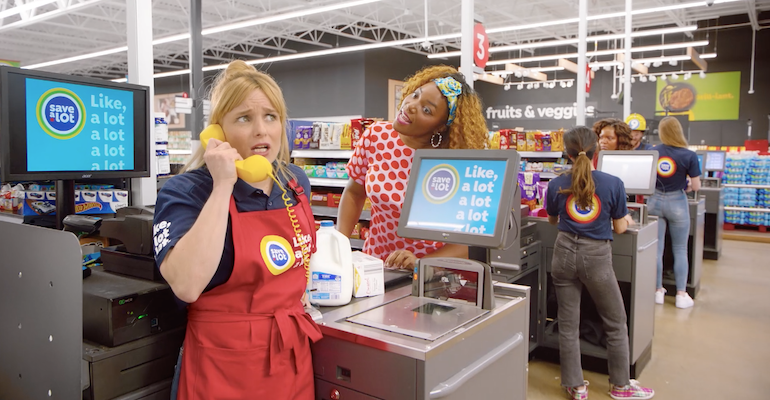 Save A Lot
Called “Like, A Lot A Lot,” Save A Lot's campaign includes an original song and music video, aimed at extending the audience reach and appeal of its brand.
News>Marketing

Save A Lot kicks off music video-themed brand campaign

As part of an ongoing brand refresh, Save A Lot has launched a music video-driven marketing campaign highlighting the value that shoppers find in its discount grocery stores.

Called “Like, A Lot A Lot,” the campaign includes the creation of a “buzzworthy” song and accompanying music video designed to have customers “singing and dancing in the grocery aisles” from the savings and shopping experience offered in Save A Lot supermarkets, the St. Louis-based retailer said.

Save A Lot expects the fun-focused content to help extend the audience reach and appeal of its brand. To that end, the grocer partnered with film director Drew Kirsch — winner of MTV’s “Video of the Year” award for Taylor Swift’s song “You Need to Calm Down” — to develop a catchy music video that people would play often, “like, a lot a lot” of times, in line with the campaign’s moniker. The new song features vocals by Tamara Bubble, Leon Evans and Sarai, three up-and-coming singers and hip-hop artists.

In addition, Save A Lot enlisted Portland, Maine-based agency VIA to devise a multi-tiered marketing and branding campaign and advertising strategy. The effort focuses on the “Lot Dot” in Save A Lot’s logo by giving it a personality in national print and digital ads.

“It all started when we took a closer look at the little red dot in our logo. Over the last year, our focus has been on our long-term growth and becoming a brand of choice for our customers, including providing them with an enhanced hometown shopping experience. This new campaign further builds on our current efforts of modernizing our stores and breaking out of the sea of sameness that’s taken over the industry as of late,” Tim Schroder, senior vice president of marketing at Save A Lot, said in a statement.

“I am extremely proud of the campaign that our team created in partnership with VIA as we continue to redefine our brand,” Schroder added, “and I am looking forward to seeing the customer response — and dance moves — to our fun, catchy song and music video.”

The “Lot Dot,” too, helps drive Save A Lot brand’s new song and music video, titled “Like, A Lot A Lot,” seen on YouTube and in 30-second television spots and streamed on Spotify, Apple Music and other digital music platforms. The retailer said the song also has been adapted into 15- and six-second animated “adlets” spotlighting Save A Lot private-brand products that will play across a range of digital platforms.

“There are many places to buy groceries — even gas stations and pharmacies — with ‘low prices’ and ‘hot deals’ not being anything new. The first thing we had to do was to stop acting like a grocery store,” according to Teddy Stoecklein, creative director at VIA. “The team at Save A Lot was incredible to work with, putting a lot of faith in the creative process and it shows. This new brand image we believe really captures the updated look and feel Save A Lot was looking for as part of its refresh." 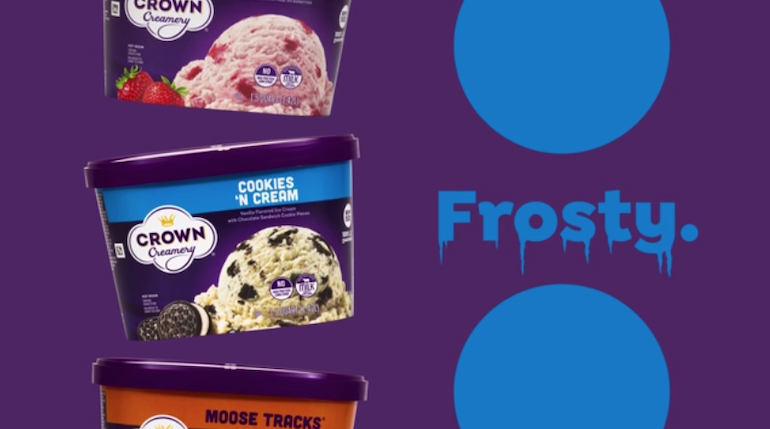 Playing off the dot in Save A Lot's logo, the campaign also includes animated “adlets” spotlighting private-label products.

The two-minute song, written by Lauren Rodrigue of VIA, is aimed at bringing Save A Lot’s hometown shopping experience to life through hip-hop, rap and pop stylings. Set and shot in a Save A Lot store in St. Louis, the “Like, A Lot A Lot” music video features a neighborhood marching band and shoppers dancing throughout the store, as well as Bubble and Evans singing the new song.

“Our goal was to make this video like nothing you’ve ever seen before from a grocery store brand, and I’m pretty sure we wound up creating a phenomenon,” Kirsch stated. “It’s impossible not to get up and dance once you see this video, and no judgment if it’s even in the aisle of your neighborhood Save A Lot.”

The marketing campaign comes at a time of transition for Save A Lot. In December, the chain announced it was shifting to a wholesale business model, a move that will entail the sale of more than 300 corporate-operated stores to current and new retail partners. Then in July, Save A Lot unveiled plans to remodel a third of its store base in 2021 and upgrade the rest of the stores by 2024 to refresh its retail brand. The company also has begun a major IT platform upgrade in a partnership with Hewlett-Packard’s Aruba wireless networking arm.

Currently, Save A Lot has nearly 1,000 stores in 32 states, with the vast majority of the locations licensed by over 200 independent grocers. Plans call for Save A Lot to retain 21 corporate-operated stores in St. Louis to serve as innovation testing grounds for retail partners. Parent company Moran Foods supplies the stores through 13 distribution centers.