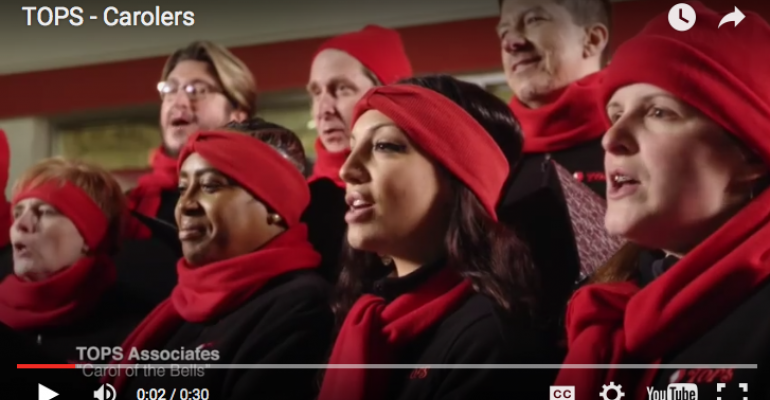 Tops Friendly Markets is sending season’s greetings this year direct from employees, who sing and star in its annual holiday television ad.

In the commercial, which serves as a greeting to shoppers at stores, a choir consisting of 11 Tops associates sing “Carol of the Bells,” interspersed with scenes of the same workers in stores.

Local company DPost produced the commercial, which also features Frank Curci, CEO and board chairman of the Williamsville, N.Y.-headquartered chain.

"As a locally owned Western New York company, it just felt natural to highlight our associates, as well as using local advertising and production resources, to bring our holiday greetings to our many area customers,” John Persons, Tops president and COO, said.

The idea behind using internal Tops talent, rather than professional actors and singers, originated at FARM Buffalo, an integrated marketing communications agency based in Depew, N.Y. The agency’s COO, Bryan LeFauve, stated that looking within the company for talent proved to be the most valuable asset to the commercial.

“When it came time to brainstorm ideas for Tops’ annual holiday commercial, we decided that the associates and their dedication to customer service should star in this year’s spot,” LaFauve said. “We're thrilled with the result and share in Tops' pride for the associates who created the soundtrack. There truly was some holiday magic involved.”

The television spot began airing in early December and will continue through the Christmas holiday.