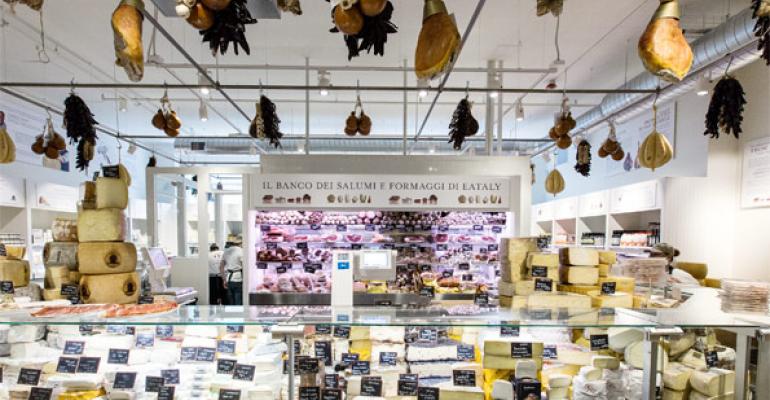 &quot;One of the things that we think makes us very different is this educational element.&quot; &mdash;JASON GOLDSMITH, Eataly Chicago

Employees at Eataly Chicago generally have one thing on their minds.

“And if there's one mantra more than anything else that we discuss internally at Eataly we hope comes across to our visitors, is that we are obsessive about quality. Sometimes we even question ourselves if it’s too much. But it’s been our overriding philosophy,” general manager Jason Goldsmith said at the United Fresh Retail Produce Marketing & Merchandising Conference in Chicago last month.

Opened in December 2013, the Chicago store is the 24th Eataly location (there are now 27 worldwide) and the second in the U.S. after New York. Across two floors, it combines a European-style market with 23 restaurants, a wine shop and cooking school.

“But one of the things that we think makes us very different is this educational element, that when you bring all these people in, when you bring in someone who is an expert on fruit and vegetables and put them next to an expert bread baker and put them next to someone who is crazy about cheese and salumi, and you get all these people under the same roof, it’s inspiring and it’s really an area where you can cross pollinate,” he said.

“And if you share all that information with your consumers, they get it and they understand it and they are somehow a little more inspired than they might be otherwise.”

In each area of the store, Eataly partners with experts in their respective fields — such as Baldor Specialty Foods for produce or Pat LaFrieda for meat — while also hiring and training passionate employees, to address customer questions.

For example, if a customer asks why a particular produce item isn’t organic, an employee will be able to explain that some fruits and vegetables are only grown conventionally, or that it would be financially prohibitive for the farmer to get the USDA certification but he grows his crops using the same high standards, said produce manager Dan MacPherson.

“But unlike a large supermarket, we have that time to talk to our customers, as well as we also have this breadth of people upstairs [in the restaurants] talking about the same product to their guests that are sitting for pizza or pasta or especially Verdure [Eataly’s vegetarian restaurant].”

Eataly also takes the time to show visitors how food ends up on their plates. The restaurants have open kitchens, and customers can watch experts make products like fresh mozzarella, pasta and sausage.

The produce department employs a “vegetable butcher” who will chop up any item on request.

“Yeah, if they didn't already have, whatever, 24 of these things when they opened here I would have said, ‘OK, so let me get this straight. You’re going to take over 6,300 square feet, hire 700 people — yeah, there’s no way that’s going to work,’” said Goldsmith.

Even with all those employees, they can’t be everywhere at once, so there is also a “crazy amount of signage” at Eataly, Goldsmith said.

“Basically any shelf that you look at there is a lot of text. And if people want to know why there are five different kinds of Ligurian pesto there, there is information right there in front of them about those five different brands and what makes them different and where they’re from and why we have all of them in Eataly.”

One sign that gets a lot of attention is the five-foot-tall wheel showing vegetable seasonality that is displayed in all Eataly stores.

“Italians don't buy tomatoes in the middle of winter when they’re not as good as they are in the summer. They use root vegetables and hearty greens and things like that,” said Goldsmith.

To stock what’s in season Eataly relies on local and regional producers.

“We actually sell more domestic and local product than we do Italian product at Eataly,” said Goldsmith.

For instance, customers will find local milk at the coffee shop and in the gelato.

Having such a small store means Eataly can be picky about its sources.

While many products are high-end, better quality doesn’t always have to translate to a higher price.

“At Eataly, our top selling item is our loaf of rustic bread. It’s one of the lowest cost items we have, but it’s handmade every day in a wood-fired oven and it’s super, super high quality,” said Goldsmith.

Even the physical elements of the store show the commitment to quality with features like custom-designed shelves.

“Obviously we could spend a lot less money on standard retail fixtures, but instead we buy the fixtures in Italy that are solid wood, they cost four or five times as much, and put them up because those products, if we really want to be obsessive about the quality, it has to be quality all the way through,” said Goldsmith.