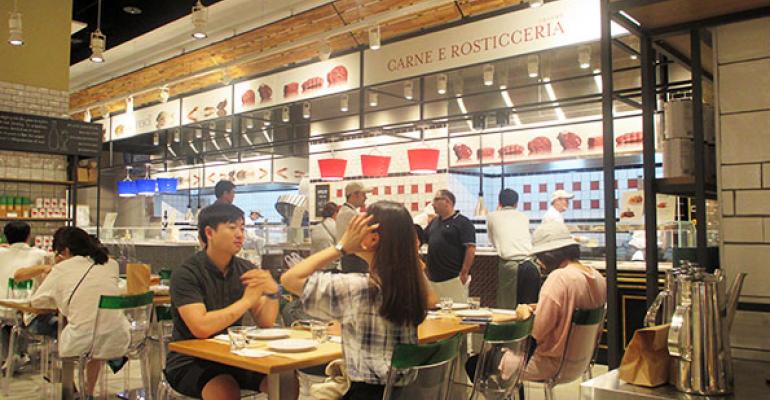 In just the past three months, I have experienced Eataly in four very distinct markets: Chicago; Milan, Italy; Sao Paulo, Brazil; and Seoul, South Korea. It is remarkable enough that Eataly can now be found on four continents but it also speaks volumes to the changes that are occurring on a global basis in food consumption.

Wonder what the future might look like? The all-important Millennial consumer is spending more than its fair share in restaurants. So, this trend is likely to continue.

How to respond? Supermarkets are actually doing a very reasonable job, with their own share of foodservice growing at a faster pace than even restaurants. Of course, the industry can be doing more. Highly evolved concepts like Mariano’s show how far the envelope can be pushed, with the addition of BBQ restaurants, wine bars, oyster bars and veggie grills included in their new format.

Coming from outside the industry, Eataly takes an even more radical approach. While the original versions in Italy still show a strong balance between a fresh marketplace and restaurant environment, their foreign models look a bit different. The formats in New York and Chicago have strong restaurant partners and have shifted even further into the foodservice world. My visit to the newest Eataly in Seoul, which just opened last week, reveals an Eataly that is essentially an Italian food court. In this format, the restaurant focus overshadows the relatively minor efforts to sell food.

What will the supermarket look like in the future? A few more visits to formats like Eataly can provide some clues. I’m happy to be the tour guide!

After grinding to a near halt, hot coffee and tea options start to come back
Dec 15, 2020