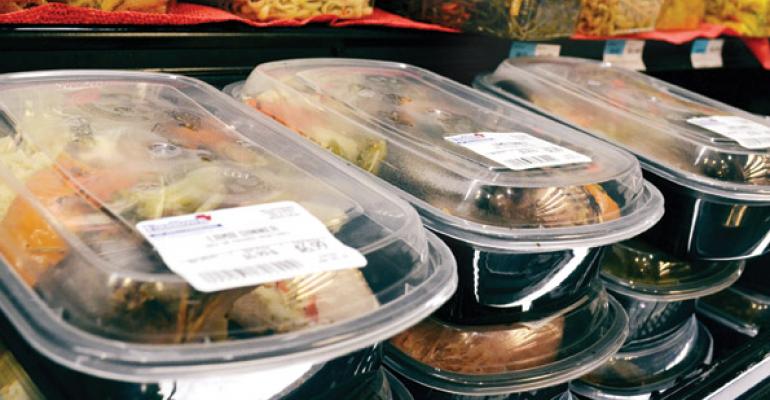 With updated offerings and low prices, bundled meals in foodservice departments give restaurants a run for their money

“Bundling is a great way to reinforce that [Retailer Meal Solutions] can be a complete meal solution, not just a component,” said Jenny Anderson, director of the RMS monitor program for Technomic, a foodservice consulting firm in Chicago.

“And retailers are in such a better position to do it now than they were in the past, because so many have enhanced their overall variety and can offer a few different choices for sides in addition to the entrée.”

“The best combination bundle that we have — it’s pretty much changed our life here — is the Wednesday meal deal. That is the bundle. I put different meal combinations together for four people and that’s around $10,” said John Mazzacco, foodservice manager at Price Chopper.

He said customers like the combination meal because of the variety of different foods; on any given week, entrées could be turkey, pot roast, Asian cuisine, shepherd’s pie, meat loaf or a KFC Chicken style bowl.

“Now we’re looking at that whether we should raise the retail because we’ve been $10 for two years now,” Mazzacco said, noting that commodity prices have gone up.

The Wednesday meal deal has proved so popular that Mazzacco is looking into a way to offer shoppers a standard meal deal every day, possibly starting in late spring.

It’s not just foodservice departments that are enticing shoppers with family-size packaged meals. Darren Tristano, executive vice president at Technomic, said he’s been seeing more restaurants getting in on the family bundling.

For an example of a newcomer to the family bundle arena, Tristano pointed to Burger King’s family meal campaign. For $9.99, the BK Bundle includes a Whopper sandwich, a Whopper Jr. sandwich, 10 chicken tenders, three small French fries, three small drinks and two pies, according to a Burger King representative.

While restaurants like Boston Market have offered family packages for a long time, Tristano said he’s hasn’t seen much of it in the quick-service restaurant segment before.

There’s also been a continuation of value pricing with bundling, as seen in chain meal deals like Chili’s $20 Dinner for Two that includes an appetizer and two entrées, Tristano said.

These two-for meals have become a big draw for casual-dining restaurants, with Applebee’s and TGI Friday’s each offering their own variations.

Price Chopper takes advantage of chain restaurants’ marketing power to highlight the value of its own meal combos, according to Mazzacco.

Subway has widely promoted its selected $5 foot-long subs, so customers know the value of Price Chopper’s $5 complete sandwich meal when they see it.

“I have the same thing with soup and sandwich or a sandwich and a kettle chip we fry in-house and a fountain drink,” said Mazzacco, who said Price Chopper puts more meat on its subs than Subway.

Because checks generally average at $12 to $13 at casual-dining locations, Tristano said a $10 priced meal is what resonates value to consumers.

Depending on the product and the location, bundled meals in deli and prepared food departments often remain lower or close to the $10 mark.

“In the last couple years, several of the upscale retailers have focused on bundled meals with an entrée and sides from their chef case areas to reinforce value,” Anderson explained. “Establishing and promoting a set price (often lower than a comparable restaurant alternative) is such a clear message for reinforcing that.”

Wegmans Food Markets, Rochester, N.Y., keeps its entrée-and-two-sides bundled meals at price points of $6, $8 and $10, depending on which items are selected.

A meal planner application on Wegmans’ website allows customers to plan ahead, showing different meal combinations with cost, calories and cups of vegetables.

The many current entrées on the meal planner include inventive items like bronzed salmon with Creole sauce and chicken Florentine with lemon butter sauce, or modernized upscale classics like pot roast with matchstick carrots and braising liquid. Using the app, customers can note their meal decisions on a virtual list, email it, or shared it on Facebook or Twitter.

Taking a different approach, Wooster, Ohio-based Buehler’s Fresh Foods, which has full-service restaurants in most of its 13 locations, captures the spirit of bundled meals with all-you-can-eat weekday specials. On Thursdays, Buehler’s has an all-you-care-to-eat pasta with a tossed salad and garlic bread for $7.99, and on Fridays, an all-you-care-to-eat fried fish dish complete with a side, buttered roll and side salad for $9.99. An endless soup and salad bowl are available everyday for under $10.

A staple of foodservice cuisine, homestyle and comfort food plays an active roll in many retailer bundled combinations.

With the “Pick 3 Express Meal” added last November, Jewel-Osco allows customers to choose between different chicken cuts and preparations for an entrée and choose two side options from salads, potato wedges and rolls.

Bundling eliminates meal-planning stress, because choices are right in front of the shopper; it also gives the shopper the ability to mix and match, which satisfies shopper desire for customization and control,  according to Anderson.

Some bundled meal varieties that catch on with customers are surprising. Mazzacco had such little faith in a pork roast entrée that was part of a Price Chopper Wednesday meal deal that he went as far to send his kitchens a pulled pork recipe to utilize the leftovers.

“And then I never needed to use the recipe. It just took off, ” Mazzacco said.

Desserts and refrigerated meals are the newest additions to these all inclusive meals, Anderson said.

Middletown, N.J.-based Food Circus has brought both cold items and desserts into meal deals, putting together bundles with products from different departments.

“It’s more or less a complete meal, and we bundle it all together in one place. And it’s almost always under $10, ” said Food Circus Fresh Foods Director James Conroy.

An upcoming bundle at Food Circus has a cold-pack pizza, an eight piece order of chicken wings, a dessert and a drink, Conroy said.

Considering location and time of year when putting together meal combinations can allow for new sales opportunities.

Reaching out to the elusive breakfast consumer, Food Circus has just recently begun serving a breakfast bundle, which Conroy said has gotten a mixed response so far.

In addition to focusing on product quality and price for bundles, retailers stressed the importance of keeping consistent schedules and advertising widely.

At Food Circus, meals change monthly in order to allow the store to do a lot of promotions through in-store signs and circulars, Conroy said.

Although Price Chopper initially got the word out about its Wednesday meal deal only through email, the addition of in-store signage and information in print ads has proved important in reaching different customers

“If you don’t draw attention to it and they don’t know about it, it’s like a best kept secret in town that you can get a deal for that [price],” said Mazzacco.