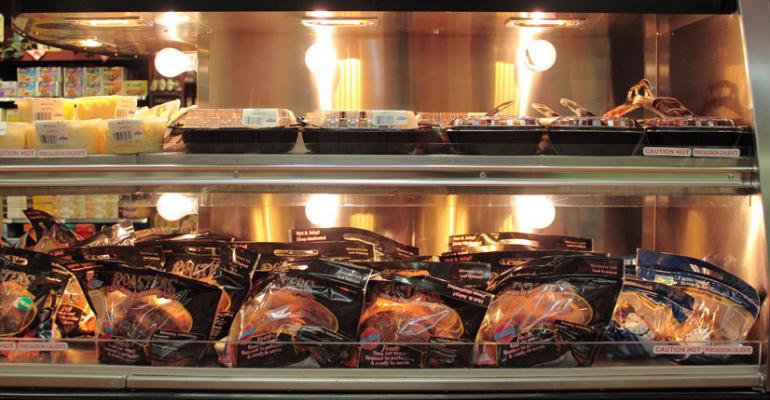 CHICAGO — Though supermarket prepared foods departments make strong impressions on customers, retailers can do more to increase purchases and better compete with restaurants, according to new research from the Chicago-based research firm Datassential.

The food and beverage research firm surveyed over 2,000 regular supermarket shoppers as well as 76 retailers to better understand consumers’ thoughts on prepared foods and what retailers do to promote those departments.

The survey found consumers are generally impressed by the quality of supermarket prepared foods, with 53% rating it as “good” or “excellent,” compared to 49% who said the same of quick-service restaurants, 70% for fast casual and 73% for casual restaurants.

“They’ve got a really good area in that they probably can compete very easily with quick-service restaurants and certainly c-stores. They have a ways to go to compete with the fast casual restaurant or a full-service casual dining restaurant,” said Brian Darr, Datassential’s managing director.

At the same time, consumers purchase meals from QSRs much more often than from supermarkets. Fifty-eight percent eat at QSRs at least once per week, versus 37% who buy grocery prepared foods once a week or more.

Darr said one likely reason is that QSR growth in the past few years has been in breakfast and snacks. “Those aren’t areas that the supermarkets excel at.”

It’s also possible customers prefer the convenience of a QSR to walking through a supermarket to find the prepared foods for those meal occasions, he said.

While supermarket retailers recognize that restaurants are the competition when it comes to prepared foods, separate Datassential studies of restaurants have found supermarkets aren’t even on their radar.

Yet, a strong prepared foods department can make waves beyond retail.

Retailers tend not to offer the same kind of promotions, such as limited time offers or a special value menu, that show success with restaurants, Darr said. Datassential also found less than 10% of supermarket prepared foods departments offer a frequent buyer or loyalty program.

“So those types of things are a mainstay for a lot of the restaurants, whether it’s a quick-service restaurant, fast casual restaurant or even a full service restaurant. So there seems to be that lack of marketing punch on the supermarket side that could potentially drive more traffic to the areas,” said Darr.

Another obstacle is that many customers don’t know what products prepared foods departments offer.

“So maybe there’s opportunities there to build more awareness and potentially more traffic to the prepared foods area,” said Darr.

Supermarkets could put prepared foods menus in marketing materials like in-store magazines, or include descriptions in emails they send to loyalty cardholders, he said. Younger shoppers, who tend to purchase prepared foods more frequently, especially like to see photos of food to plan purchases.

“Just as we on the restaurant side are starting to see restaurants use social media a lot more, those same tools are available to the supermarkets to promote the prepared foods area,” said Darr.

Many retailers have updated or changed their prepared foods in recent years, and their customers take notice when that happens, Darr said. For example, Datassential received multiple anecdotal responses that mentioned the new pizza at Big Y Foods, Springfield, Mass.

“I think the thing to note is that the consumers are really — when there is a change made, they’re noticing it,” said Darr. “And so I think that that’s a good sign because they’re paying attention to that.