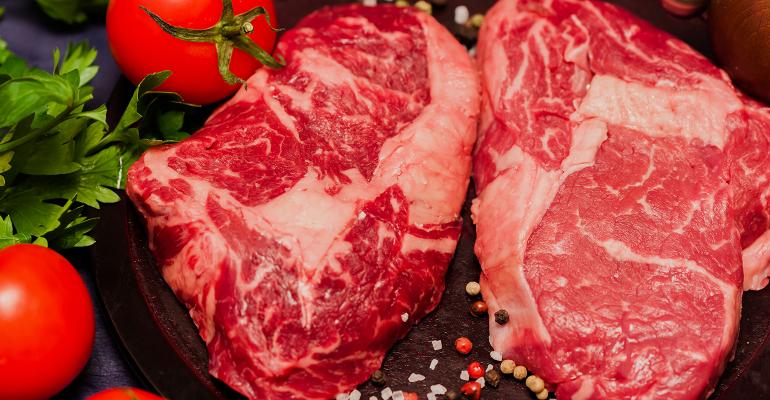 Bashas’ has become the first and only retailer in the country to merchandise beef from a program designed to help Native American ranchers get their product to market.

The Native American Beef program, operated by Labatt Food Service, San Antonio, works with individual families on the Navajo Nation and other Native American ranchers to provide the tools and training they need to prepare their livestock for sale. Labatt, a foodservice distributor in the Southwest, has been supplying casinos and restaurants in the region with Native American Beef since 2013, but Bashas’ represents the program’s retail debut. “Bashas’ Family of Stores has a long history of partnership with the Navajo Nation, building our first store there in 1982,” said Ashley Shick, a spokeswoman for the Phoenix-based chain. “We are strong supporters of both the Nation and its people, but also strong advocates of sourcing and supporting the local businesses in which we serve, and the Native American Beef program is a wonderful example of that.”

She said Bashas’ was approached by leaders of the Native American Beef program last year, and has been working closely with them to get the product into two of its Bashas’ Diné Markets — the name for the stores Bashas’ operates on the Navajo Nation. (See photos of the recently remodeled first Bashas’ Diné Market in Chinle, Ariz.)

The stores currently carry cross ribs and boneless chucks form the Native American Beef program. The products are indicated by signage in a special display.

“At this time, because the products are only at two of our locations, we have not advertised these products outside of our stores,” said Shick.

Labatt, which operates two USDA-inspected processing facilities, delivers the beef to the stores weekly, where it is cut and packaged, said Ken Monacelli, regional branch manager at Labatt.

He said the program involves about 42 rancher families in the Navajo Nation, most of whom have relatively small herds — in some cases as few as one or two cattle.

“It’s a community project,” said Monacelli, noting that Labatt launched the program as an effort to support Native American ranchers, who often faced challenges competing within the established meat-production industry in the region.

“We spent a number of years working with the individual families, learning about their ranching, their communities, and how the sovereign nations were working with ranchers — everything from land management, to water, and so on down the line,” said Monacelli. “We found local producers who were doing a wonderful job raising their cattle.”

Labatt worked with local Navajo authorities to provide technical assistance, a vaccination program and some training and support around genetics — “whatever they needed so that their herds could grow and be of the upper Choice and Prime levels,” said Monacelli.

Native American Beef is “not a commodity beef program,” he said, citing the high quality standards.

Monacelli said Bashas’ has exclusive rights to Native American Beef in its geographic markets during the launch. Labatt works on the program in partnership with Where Food Comes From, a third-party provider of verification and certification services based in Castle Rock, Colo.

The Bashas’ program is still in the early stages and is being monitored closely by all involved, said Monacelli.

“Bashas’ has been a wonderful partner,” he said. “Their whole team has been outstanding to work with.”