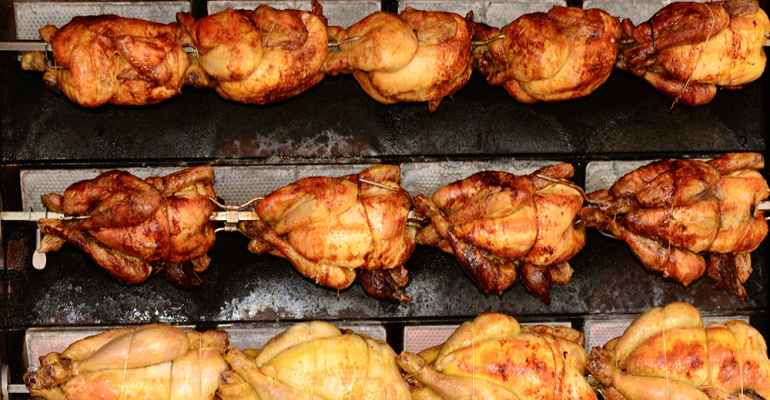 In April 2016, Costco announced plans to build a poultry processing complex in eastern Nebraska with the primary purpose of supplying the more than 90 million rotisserie chickens it sells each year. The $400 million investment raised numerous questions about how the nation’s third-largest retailer will orchestrate the construction and operation.

A new report from CoBank’s Knowledge Exchange Division, however, predicts that the company’s decision, which will make it the first U.S. retailer to integrate its meat supply to the farm level, may prompt other food retailers and foodservice companies to re-evaluate their own supply chain integration opportunities.

According to the report, the new chicken complex, which is slated to open in September 2019, is expected to generate a savings of 10-35 cents per bird and comes as rotisserie chickens have become a major traffic driver for in-store Costco customers. Since 2010, Costco’s rotisserie chicken sales have grown by more than 8% annually — three times the growth rate of total U.S. poultry consumption — and the item has maintained a price point of $4.99 per chicken. Additionally, the move comes at a time when available supplies of whole birds at targeted weights have declined.

CoBank also noted that Costco’s move marks the first time a U.S. retailer has taken on the risks associated with animal husbandry, including feeding, animal welfare, disease prevention and harvesting.

“We see the decision by Costco to bring its poultry supply in house as a result of three primary drivers: surety of supply, visibility up the chain and cost control,” said Will Sawyer, lead animal protein economist at CoBank. “The ability to control the consistency of bird weights enhances food preparation and safety. Locating the facility in Nebraska also provides access to feed at favorable costs, a reliable water supply and a comparatively advantageous labor market.”

The Nebraska complex will be able to process 100 million birds per year, with one-third of the rotisserie program being produced in house. The facility will also process chicken parts.

If Costco’s foray into production and processing is successful, it could be the model for other food retailers and foodservice companies to vertically integrate in other protein sectors. In fact, the report pointed out that the decision has already been set in motion in the dairy sector, where companies like Kroger, Walmart, Safeway and others own fluid milk, ice cream and cheese production facilities to protect important traffic drivers for the store.

However, CoBank said the key difference between these dairy investments and Costco’s chicken plant is that Costco’s integration reaches all the way to the farm, highlighting the new level of risk exposure Costco is taking on to protect an important product line.

“Food retailers will need to evaluate a number of risks in order to justify the investment of time and capital required to build their own production capacity,” Sawyer said. “Beef packers have historically yielded very tight margins, and with declining per capita beef consumption, the sector would be unlikely to meet its return objectives.”

“Additionally, retailers will need to consider food safety risks, negative profitability in production and whole animal utilization to justify such investments,” he said.

Of the three major proteins, poultry is the most appealing for retailer integration. Opportunities for further integration in poultry will likely be focused in secondary and further processing rather than primary processing, Sawyer said.

If Costco’s chicken production is successful, it will undoubtedly prompt questions across agricultural supply chains and lead other food retailers and foodservice companies to re-examine their business models, the CoBank report concluded.