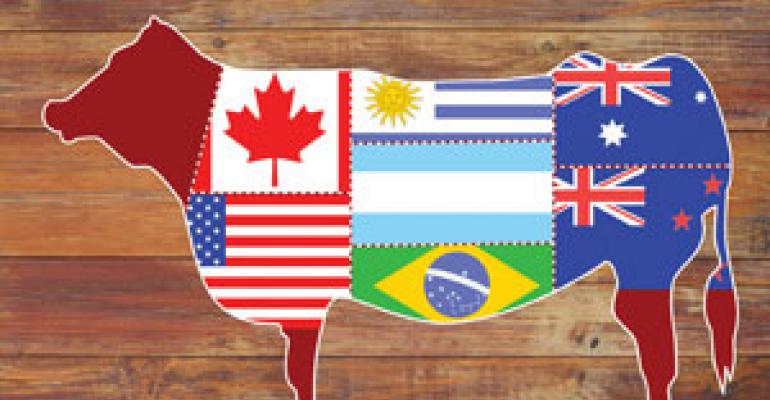 CUT TO THE CHASE

It sounds far enough away October 2008 but the mandatory Country of Origin Labeling law for meat is just around the corner, and groups such as the Food Marketing Institute say the sooner a final ruling is issued, the better. Congress will get to work on the 2007 Farm Bill after spring recess, and that means they'll be starting the process on COOL, John Motley, FMI's senior vice president of government

It sounds far enough away — October 2008 — but the mandatory Country of Origin Labeling law for meat is just around the corner, and groups such as the Food Marketing Institute say the sooner a final ruling is issued, the better.

“Congress will get to work on the 2007 Farm Bill after spring recess, and that means they'll be starting the process on COOL,” John Motley, FMI's senior vice president of government and public affairs, told SN earlier this month. “Now is the time for everybody to be thinking about the modifications that are needed. We're developing our presentation for Congress right now.”

A preliminary ruling could be issued as early as late fall 2007, Motley said, giving the industry time to figure out how to implement the law when it becomes effective in 2008.

While Motley said he holds out little hope the law will be modified significantly, he emphasized the need to get as much information to Congress as possible before then, in hopes of easing some of the proposed law's more onerous requirements.

Under the requirements, as they are written now, a fine of up to $10,000 could be imposed on a retailer for infraction of COOL rules, Motley said. COOL, as it relates to meat, will also require retailers to know where an animal was born, raised, slaughtered and processed, and to label products accordingly.

By comparison, mandatory seafood labeling, which has been enforced since April 2005, has been relatively easy, Motley said.

First of all, he pointed out, less seafood than meat is sold in this country, and the “born, raised and harvested” requirement does not apply to seafood. What's more, seafood is not cut up into many pieces before being distributed around the country.

Knowing a steak's origin, back to the birth of the animal, presents a bigger challenge than pinpointing the origin of a shipment of cod or salmon, he said.

“Identifying where the animal was born, raised and slaughtered becomes particularly grueling when it comes down to hamburger,” Motley told SN. “AMI [the American Meat Institute] tells us we import meat from nine different countries and mix it with fatter U.S. beef to make hamburger.”

As the atmosphere in Washington heats up with proponents and opponents of mandatory COOL making themselves heard, Motley talked to SN about what FMI is doing on retailers' behalf, what FMI expects will happen, and how retailers and their suppliers can get ready.

“We'll present about 10 recommendations to Congress. The first three or four are the most important,” Motley said, referring to modifications that would take the burden of responsibility for labeling away from the retailer, and make traceback easier.

He pointed out that since retailers are at the end of the distribution chain, it doesn't make sense that they should be responsible for knowing the birthplace of every steak and chop in their meat case.

“The retailer is clearly the wrong person to be responsible for labeling. All the other COOL laws require the manufacturer or the individual in the distribution chain who knows where an item came from to label it.

“Look at your dresses, blouses, car, all of those are labeled by the manufacturer because it's he who knows where the component parts are from.”

Another industry source made a similar comparison.

“If I buy a cotton shirt that says it was made in the USA or in China, I understand it was assembled there,” the source said. “There's no request for information about where the cotton or buttons came from.”

“If we had animal ID it would be easier, but that is specifically prohibited in the COOL statute. That was written into it because ranchers didn't want it. They didn't want traceback to the farm,” Motley said.

But there is the possibility that animal ID legislation could come out of this Congress.

In fact, Motley said House Agriculture Committee Chairman Collin Peterson, D-Minn., has said he may put animal ID together with COOL for meat in a separate bill.

The reason Motley said there's little hope of changing the mandatory COOL statute, let alone of repealing it and replacing it with a voluntary system, is that there is more support for mandatory COOL in the new Democrat-controlled Congress than there was when the Republicans were in the majority. Indeed, more are piling on, as evidenced by a bill introduced by Sen. Craig Thomas, R-Wyo., to bring the deadline for implementing mandatory COOL closer.

In addition, Sen. Tom Harkin, D-Iowa, and chairman of the Senate Agriculture Committee, is still committed to mandatory COOL. He introduced the original COOL provisions as part of the 2002 Farm Bill.

A bipartisan group across the northern tier of the United States strongly favors the mandatory COOL statute, Motley said. They represent ranchers, many of whom believe that if you can differentiate between beef born, raised and slaughtered in the United States, and other beef, that American consumers would buy all-American beef and pay a premium for it.

FMI does not agree with that assumption, and says that this idea has not been borne out by mandatory seafood labeling.

What Rep. Peterson has told the meat industry is this: “You're going to have a law on the books come Oct. 1, 2008. So you need to come to me and tell me what needs to be changed in the law to make it easier to implement and to live with.”

“We [at FMI] are engaged in coming up with the things that need to be changed, and at the same time, AMI and the cattlemen are developing their own lists,” Motley said.

“[It is hoped] we can get together, but we're not there yet. Everything will be in flux in the next six months. There are three or four dozen factors in play. Remember, mandatory COOL is just one component of the Farm Bill.”

It's a huge challenge, but Peterson has said he wants to finish by Congress' August recess and then go to conference with the Senate.

“I think that's optimistic,” Motley said. “I'd say fall or winter, but the sooner a preliminary ruling is negotiated, the better. Then, we'll all know what we have to do. Even if we can't change the law, we want it done because we need to know what to do.”

For retail, the big concerns are the expense of paper work, computer systems, scales and employee training. For meat processors, it's their facilities. They'll need time to retrofit their plants, if that's necessary, Motley pointed out.

To handle the different groups of cattle separately, retrofitting would be necessary and could cost meat packers $10 million per processing plant, they said.

With negotiations continuing, Motley said he holds onto hope for some degree of compromise.

“Much of legislation writing is quid pro quo, and the two Ag chairmen have other items they want pushed, such as animal ID, stronger food safety precautions, and maybe more fruits and vegetables included in the Food Stamp and WIC programs,” Motley said, adding he expects to be able to work with them.

Meanwhile, Motley, like others in the industry, suggested retailers talk to their suppliers, to FMI and to their own legislative representatives about what would make the mandatory COOL law easier for them to deal with.

While Food Marketing Institute prepares its presentation to Congress, retailers and others industry sources expressed some of their own opinions about COOL.

Spokesmen for some large supermarket chains told SN they've put all their confidence in FMI to go to bat for them.

Others, while also supporting FMI, said mandatory country-of-origin labeling for meat will not be a big deal because they use so few suppliers.

Meanwhile, some trade groups and suppliers said they're concerned about the details that could make mandatory COOL for meat too cumbersome.

“Our stores already clearly identify our Australian products, so COOL implementation will be seamless.”

“We're set as far as COOL and meat go,” Gridley said. “We get all our beef from Coleman All Natural, our pork from Du Breton and some lamb from Coleman and an Iceland co-op.”

Gridley said the only aggravation he foresees is having to put another label on meat packages, which will make it more difficult to see the product.

Suppliers have been talking to their retailer customers about what to expect.

“We try to keep an open dialogue with our retail customers and with government officials, and we also want to inform the media properly,” said Norman Bessac, vice president, marketing and key account management, Cargill Meat Solutions, Wichita, Kan.

“We as packers have to label products according to the law. Our biggest area of concern is getting the correct information.”

Those who back COOL have reservations about how the statute is written.

“We support COOL, but the devil is in the details,” said Karen Batra, director of public affairs for the National Cattlemen's Beef Association.

“We're working with our members. We want the implemented law to help everybody on the distribution chain, not hinder them.”

NCBA is pushing to make the law more inclusive, covering restaurants as well as retail stores, for instance, and poultry as well as red meat.

Meanwhile, consumers seem to be unconcerned about the origin of meat unless they're looking for a special item, like Kobe beef or grass-fed beef from Argentina, according to Mona Doyle, president, Consumer Network, a Philadelphia-based consumer research group.

“Any opinions I hear about meat are taste-based,” she said.
— R. H.