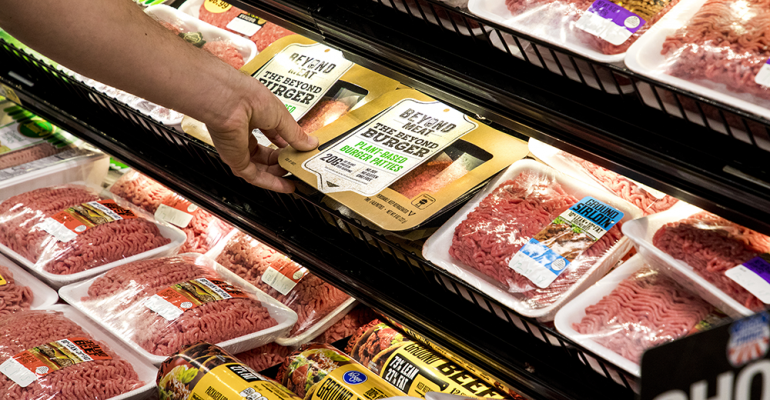 Facing off against plant-based products

An expanding focus on healthy eating is triggering greater consumer interest in plant-based alternatives to beef, chicken, pork and other meats, and is leading more retail operators to market the meat substitutes — while at the same time, coming up with merchandising strategies to prevent meat sales from being siphoned off by the newcomers.

Among the prominent alternatives is Beyond Burger from El Segundo, Calif.-based Beyond Meat, which uses peas as its primary source of protein and beets to mimic the red appearance of beef. Selections are available at such supermarket banners as Wegmans, ShopRite, Publix, Sprouts Farmers Market, Kroger, Safeway, Vons and Ralphs. 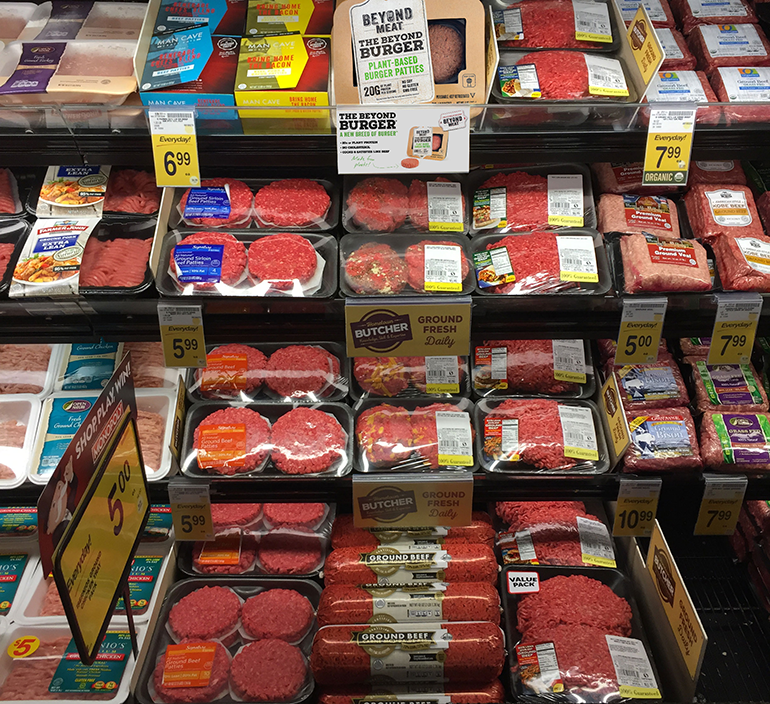 In addition, Redwood City, Calif.-based Impossible Foods Inc., which offers its Impossible Burger with plant-based ingredients at more than 5,000 restaurants in the U.S., Hong Kong and Macau, plans to expand the offerings to supermarkets in 2019, the company reported. The burger is made mostly of wheat and potato proteins, coconut oil and heme, which the company stated is the same breakdown of macro and micronutrients in meat from cows and which cooks, smells and tastes like meat from cows.

Meat substitutes accounted for 14% of global meat launches in the first nine months of 2018, up from 6% in 2013, reported Innova Market Insights, an Arnhem, The Netherlands-based market research firm specializing in the food and beverage industries.

“The broadening interest in plant-based diets has also resulted in meat alternatives moving beyond their original vegetarian and vegan domain to encompass a much broader base of flexitarians,” the company noted.

Even traditional meat suppliers are expanding into the non-meat sector. Major poultry provider Tyson Foods Inc. over the past 15 months made an additional investment in Beyond Meat, which slightly increased its ownership stake from the 5% established a year earlier, and also invested in San Leandro, Calif.-based Memphis Meats, a startup seeking to produce cultured meat directly from animal cells.

Tyson stated that such ventures are a way to meet the growing consumer demand for protein in a sustainable manner.

Generating much of the interest in plant-based options are Millennials and Gen Xers, reported Information Resources Inc. (IRI), a Chicago-based market research firm. The consumer segments drove 67% of plant-based protein volume sales, versus 57% of meat categories sales, for the 52 weeks ending 5/20/2018, IRI noted.

While plant-based alternatives are more of a complement than a peril to meats, supermarket meat department operators still can do more to publicize meat attributes to sustain and grow activity, Chris DuBois, IRI senior vice president, told SN.

“Meat does not get not enough credit for having as much protein as it actually does,” he said. “Because so many other brands and categories emphasize proteins, such as Cheerios, many shoppers naturally gravitate to other categories when they are thinking about protein. They do not remember meat as a true protein source but more as a center-of-the-plate item.”

In addition to in-store signage that details meat characteristics, merchandisers can spotlight claims on packages, including protein grams per serving and amounts of calories and fat, DuBois said, noting that “emphasizing the health and wellness side of it can go a long way.”

While such initiatives can help strengthen shopper interest in meats, sales of plant-based alternatives still are likely to increase.

“There is nothing anyone can do, particularly because there is a need for vegetarian-type burgers in the marketplace and some consumers are demanding it,” said Jamie Schweid, president and CEO of Schweid & Sons, a Carlstadt, N.J.-based ground beef purveyor. “Merchandisers can innovate a little within the meat department, but a mature market like beef is not going to have the exponential growth of plant-based. Eating habits are changing.”

While he admitted that plant-based selections are cutting into meat sales, Schweid said meat merchandisers can also make their proteins more attractive with additional product transparency, such as detailing where cattle are raised and the ranchers who are developing the meats.

“Consumers are looking for human connections with brands and companies to build credibility and trust,” Schweid said.

Retailers also can strengthen the appeal of meats by offering additional higher-quality selections, analysts noted. Indeed, there already has been a 46% increase between 2006 and 2018 in the share of beef that grades prime and choice, Bridget Wasser, executive director of Meat Science and Supply Chain Outreach for the Centennial, Colo.-based National Cattlemen’s Beef Association (NCBA), told SN.

“As long as the beef industry continues to responsibly raise quality products that consumers crave, the alternative protein market will remain small,” she said.

It also is important for retailers to educate shoppers, as well as store associates, on the wider range of meat options as many consumers are only comfortable with a few cuts and many employees do not have necessary training to answer customers’ questions at the meat case, Wasser said.

Misunderstanding between the differences of meat and plant-based options can further impact activity, according to a spokesman for the Washington, D.C.-based North American Meat Institute (NAMI).

NAMI has concerns about merchandisers not clearly identifying items as plant-based; improperly using the term “meat” on plant-based packages; and incorporating plant-based marketing statements involving nutrition and environmental benefits that are not based on science or offering little evidence for backup, the spokesperson said.

“This is another area where retailers can play a key role in ensuring consumers are not being misled by the products on their shelves,” NAMI added.