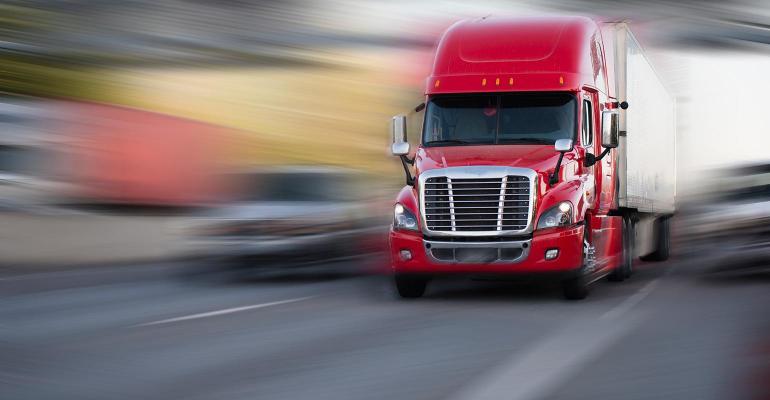 vitpho/iStock/Thinkstock
In a fragmented industry, 99% of trucking companies have 50 or fewer trucks; 89% have one to five trucks.
Product Categories>Meat

Keeping truckers happy can be critical to retailers’ supply chain

A fragmented trucking landscape, driver shortages and rising insurance rates are just a few of the pressures of the industry

The third-party logistics business is about a $200 billion industry, noted Robert Voltmann, president and CEO of Transportation Intermediaries Association, during Tuesday morning’s session on “Hot Topics in Meat Retail” at the Annual Meat Conference. He added that 99% of trucking companies have 50 or fewer trucks; 89% have one to five trucks. The challenge for meat buyers and sellers is navigating that fragmented truck industry.

Insurance rates are also going up. “In some instances, truckers are facing greater than 100% increases,” Voltmann said. “And so they buy the insurance they can afford.” This can be a problem for companies that demand truckers have high liability insurance; they are in essence fishing from a smaller pool.

Competition for truck drivers from the oil industry and Amazon and other delivery companies is also cutting into the available driver pool. There is less rail movement, and more truck demand.

And if you’re counting on driverless trucks to save the day, Voltmann offered a reality check. “Driverless trucks are not going to be here any time soon,” he warned the audience. Since most accidents involving trucks are with four-wheel vehicles whose drivers are responsible, “until we automate automobiles, we won’t have driverless trucks on our highways.”

Voltmann did offer some advice for easing transportation pain. “The most important part of trucking, the whole supply chain, is that driver’s hours,” he said. “If you waste that driver’s time, you’re going to pay for it. So, as we learned when we were little kids, the golden rule: Do unto others as they would do unto you. The trucking companies and drivers have a choice as to who they service. I would greet every truck with a cold glass of milk and a tray of warm cookies. Because you want that driver to like you. You want that trucking company to want to come to your facility. You want that trucking company to remember that they were treated right when they came to your facility. If you treat them poorly, they have a choice and they may not come back.

“The driver is the most important part of your supply chain,” Voltmann reiterated. “Treat them right.”