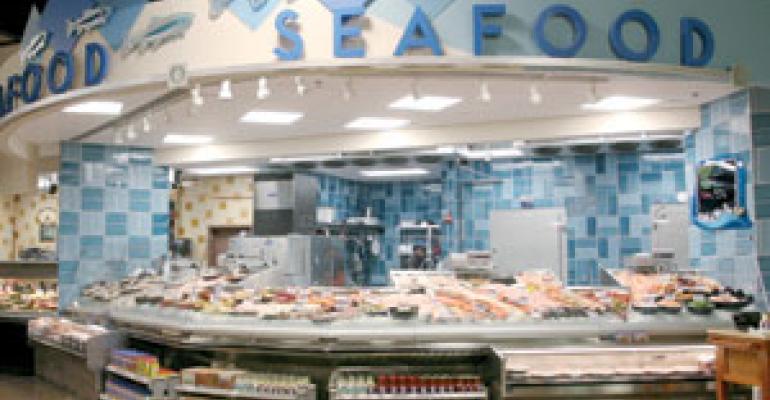 Service counters have grown in importance for many chains, even as other retailers cut back on skilled labor

When Big Y opened its newest store last month in Bethel, Conn., the chain proclaimed to the press that “The Butcher Is Back.” The 65,000-square-foot location features the company's first exclusively full-service meat department — -all beef, pork, lamb and veal products available at the store are custom-cut by a staff of butchers.

With all manner of case-ready meats now available to ease the workload — and labor costs — of a full-service department, Springfield, Mass.-based Big Y's move may seem unusually retro to some industry observers. But in many ways, the department is the latest iteration of two competing philosophies in food retailing: Either make service departments a cornerstone of a supermarket's image, or get rid of them entirely.

Wal-Mart helped set this growing dichotomy in motion seven years ago. In 2000, a vote to unionize by 11 of the company's meatcutters at a single Jacksonville, Texas store was followed shortly afterward by an announcement that Wal-Mart would make a chainwide shift to case-ready meats — something the Bentonville, Ark.-based giant accomplished within six months.

Since then, many retailers that have attempted to maintain a price-conscious image have followed suit or have made significant cutbacks in service staff. Others, like Big Y and their new Butcher Shop, have found that reinventing and reinvigorating service departments is by far the best way to make a store or chain stand out in a crowded field of competitors.

“One of the first things retailers have to decide is how are they going to offer service,” noted Jim Wisner, president of Wisner Marketing Group, Libertyville, Ill.

“It really starts with fundamental and basic positioning in terms of ‘Who are we in this market, what do we stand for, what kind of a store are we to shop?’ And if that includes service, then now you're going to have to figure out how you're going to provide that in a way that the customer perceives that they are genuinely getting something extra that makes it worth shopping there.”

Publix Super Markets — which for more than a decade has been the top-ranked supermarket chain in the University of Michigan's annual American Customer Satisfaction Index survey — views well-staffed service departments as a critical component of the company's image and retail strategy.

“We absolutely see it as an asset to have staffed counters,” said Maria Brous, spokeswoman for the chain. “That's part of the interaction and the customer rapport. Customers shop at Publix for the whole shopping experience — from the quality products to the competitive prices — but above all, it's for the customer service. That's what we're known for. If you don't staff your counters, you'll lose that customer interaction, and you'll have no opportunity to build a relationship with the customer.”

The value of these relationships is almost impossible to account for on paper, but most retailers agree that they do boost sales and loyalty, and can improve a shopper's perception of a store.

“There are still guests that like to walk up to that counter and pick out the rib eye that they want, or they want [our butchers] to cut another rib eye because they want it an inch and a quarter thick instead of an inch thick,” said Mike Holt, store director at United Supermarkets' Market Street location in McKinney, Texas.

The ability to offer customization like that “is definitely an asset that we have over our competition,” Holt added.

Other United representatives agreed. “We also get a lot of satisfaction having control over every cut of meat,” said Michelle Owens, spokeswoman for the chain.

“We don't have to worry about a guest picking up something that we never touched or chose. They get to see both sides of their meat, they get to know that it's a quality cut, and if there's something wrong with it, the responsibility is ours and we will fix it. It doesn't fall on a third party.”

Suggestive selling with staffed counters can increase sales as well, according to Craig Babbs, meat manager at the Market Street location.

Brous sees it the same way at Publix. “The added value is having someone who's familiar with the product and knows what complements the product, and obviously, for business reasons, suggestive selling — it's a win-win,” she said. “But you really need to staff all of the counters to effectively merchandise them and to effectively win with your customers.”

Human interaction with knowledgeable associates may be particularly important to shoppers when they are planning for special occasions, such as large holiday meals, parties and family gatherings, noted Michelle Barry, president of Tinderbox, a part of Bellevue, Wash.-based research consultancy The Hartman Group.

“Human interaction and staffed counters do send off cues of quality and freshness, and to eliminate the human component also tends to eliminate the story — the narrative of the product that makes it distinctive,” Barry said.

Not having a staffed service counter “also tends to eliminate opportunities for personalization and customization even within that particular product — the thickness of the cut, or the preparation technique that consumers hadn't thought of themselves,” Barry added. “Those elements, those narrative-buildings, those quality distinctions, are things that you can't get as easily at a static counter, even if you put out brochures or recipe cards.”

Yet studies indicate that when case-ready options are available, most shoppers tend to use them. Shoppers with access to case-ready meats select about 70% of all meat purchases from the self-service area. About one-fifth buy case-ready meat exclusively, whereas only 8% never use the case, according to “The Power Of Meat 2007” report, sponsored by Cryovac, a division of Sealed Air Corp., and commissioned by the Food Marketing Institute and the American Meat Institute.

A separate Cryovac study indicated that there may be significant hidden costs — beyond labor — at many service counter operations. An extended recent study of four stores in a mid-Atlantic retail chain produced a report titled the “Retail ‘Real World’ Cost and Shrink Study.”

Key conclusions drawn by the study indicate that service counters may produce excessive trim generated from beef products in retail back rooms, resulting in lost sales and profits. From store to store, there were also huge variations in yields, cutting specifications, labor and sanitation — all representing hidden costs that contribute to lost profits in all categories in the meat case. The average composite of these “hidden” costs for beef, ground beef, boneless and bone-in pork was determined to be as much as $0.65 per pound.

While the study showed large amounts of shrink and an average meat production labor cost per pound at $0.17, it also conceded that a combination of store-cut meat in a small service case with a good display of case-ready could work very well.

These expenses help explain why several retailers have felt it necessary to expand their case-ready options or, in several instances, eliminate service personnel entirely, particularly when they compete with a Wal-Mart or serve a price-conscious demographic.

Yet many industry observers view an attempt to compete with Wal-Mart on price by eliminating service a strategy doomed to fail.

“If you look at the history, especially in the New York area, you had, at one point, Pathmark supermarkets saying that they were going to go into precut meat and self-packaged meat and self-service meat without having meat cutters cut it, and it failed miserably,” said Brian Petronella, president of Westport, Conn.-based Local 371 of the United Food and Commercial Workers Union.

“Out in Ohio, Tops Markets, as a last-ditch effort, went into prepackaged meats, and that failed terribly, and now the stores are closing or are up for sale. It's just a way to reduce the number of hours in a department and cut labor costs,” he added.

“There's just been a decline in service, and as a result, I really don't think it's good for the consumers.”

Similarly, Quincy, Mass-based Stop & Shop recently announced that it will make some of its floral and seafood departments into self-service models to cut back costs, but company representatives said they also hoped the new case-ready model would help improve convenience, freshness, variety and value at the affected stores.

“There is a matter of cost; there's also a matter of, we feel that our customers are going to find these departments to be convenient — these products will now be readily available,” Robert Keane, spokesman for Stop & Shop, told SN in an earlier interview [See “Self-Service Floral and Seafood for Stop & Shop,” SN, April 2, Page 33]. “This is done in many supermarkets, and to be able to continue to give them the freshness and quality that they want at good prices, we think this is necessary.”

The strategy has produced solid success stories other than Wal-Mart, however.

Jim Wisner said he believes that case-ready meat is indeed cost-effective and can provide a consistent level of craft and quality that's not quite as possible on an individual-store basis.

“It was a little more difficult to provide consistency through all your stores. We do a lot of research in the industry, and we're at a point where I don't think the customer really sees it as a negative — as long as if they do need to ask a question, or they do need to get something special, that there is somebody that they can get ahold of to do that.”

For example, 37.7% of consumers polled in “The Power Of Meat 2007” study said they think that prepackaged meat is of lesser quality than fresh-cut meat. About six in 10 said they would think more highly of the quality of case-ready meat if someone assured them that it was prepared in a USDA-certified facility.

“Many of these references hint at the higher perceived quality of meat at the service counter,” the report stated. “Additionally, shoppers comment that they make use of the service counter when they cannot find the kind or quantity they are looking for in the meat case.”

Staffed counters send freshness cues, and by removing the human element, retailers are basically getting down to habitual shopping, grab-and-go or minimal browsing types of occasions, said Barry of the Hartman Group.

Brous of Publix and Babbs of United both agreed.

“They believe they're receiving the freshest product at a service meat counter,” said Babbs.

He recalled one supermarket operator who pointed out that one of the things his shoppers complained about was having to wait in line at the deli, so he evaluated his deli sales and concluded that 50% of it was done in half-pound increments of four basic cold cuts and pint and quart sizes of four basic salads. He then provided those products on a prepackaged, ready-to-go basis — and substantially reduced the lines and had more time to provide real service.

“His deli business grew, his service reputation grew and everything worked,” Wisner said.

“So, sometimes providing service is providing self-service, because it frees you up more to genuinely help those people who do need to interact in some way. In the long run, it saved him a lot of labor dollars, but the most important thing in his mind was that he actually improved his service reputation.”

Industry officials and experts all tended to agree that completely eliminating service counter personnel does not have positive connotations from a consumer perspective, but that being able to achieve a healthy balance of staffed counters and self-serve cases can lead to success.

“There are occasions that consumers will tap into self- service, but we don't think that total elimination of human interaction is consistent with what consumers are asking for and hoping for at retail today,” said Barry.