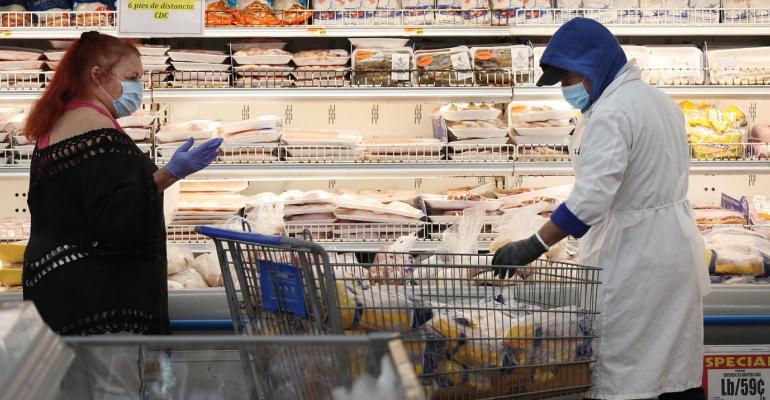 Joe Raedle/staff/Getty Images News
Despite the challenges of the past year, the meat industry has plenty to be optimistic about — not least the nearly 20% sales increase in the category in 2020, according to the Power of Meat report.
Product Categories>Meat

At Meat Conference, retailers and suppliers look back on a year of COVID

Leaders from Albertsons, The Giant Company, Cargill and OSI Group share their memories and lessons learned from the pandemic

The impact of COVID-19 over the past year is clearly on display at this year’s Meat Conference, a totally virtual event compared to last year’s traditional show in Nashville in March — which for many in the retail and meat industries was the last in-person event of what’s turned out to be a very long year.

As Julie Anna Potts, president of the North American Meat Institute, noted, “If you were there in Nashville, it was right before the pandemic. We got it in right under the wire, and maybe in a little bit of an omen for what 2020 turned out to be, the meeting was hit with a tornado. If you were in the Nashville Opryland hotel, you might remember it was crazy and we didn't even know at that point what was still to come.”

Still, despite the challenges of the past year, the meat industry has plenty to be optimistic about — not least the nearly 20% sales increase in the category in 2020. But as in every business, there were difficulties and hardships along the way for both retailers and meat suppliers over the past year.

Here are excerpts from the session:

Potts: When shopping habits changed, we had some really dramatic shifts that hadn't been predicted at all. Susan, let me start with you and ask at what point last year did you realize that there was going to be a significant impact to your supply chain?

Susan Morris, Albertsons: So for us, for total store, it was really in about January of 2020 that we started to see delayed shipments on seasonal import items from overseas. I think that was probably the earliest indicator of what we had coming our way. And then of course, the news coverage started impacting sales and categories such as face masks, hand sanitizers and so forth. Actually long before we started hearing about significant cases here that that ramp-up happened. So next we saw our GM HBC categories like hand sanitizer and of course paper products seeing significant constraints. And while I wasn't at the conference last year, the team did share with me that there were discussions at that time as well with our vendors about the pandemic, especially those with international connections. 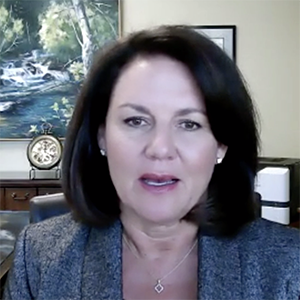 At first it was the restaurant closures, which actually created oversupply on fresh meats, which was very helpful to us. But then every business that touches our industry was affected from schools, to colleges, to airlines, to cruise ships. We had an opportunity, a tremendous inventory that was really displaced at some point in the entire supply chain. And those inventory backups in combination with the panic buying that was happening in retail actually really put this focus very squarely on grocers to help redistribute the meat products. Consumers were appreciative of those partnerships there.

Potts: Jon, from, from Cargill's perspective, when did you all become aware that this was going to seriously disrupt the supply chain?

Jon Nash, Cargill: Probably around the same time as Susan mentioned. Businesses all over the world, and our colleagues in Asia, were certainly raising awareness and helping us to understand the potential implications. And so by early February, we were certainly already talking about what changes we would need to make across our operations and in North America, especially as, as we knew it was coming. And, I think interestingly, you just had to watch consumer behaviors. We all experienced that ourselves, we were part of that as people out and trying to take care of our families and each other. And so, as the talk of shutdowns increased and people began to pantry load, we were hearing from our customers that demand was certainly increasing. And, then as travel came to a halt and we knew foodservice demand was going to be hit substantially. And then as restrictions on dining became a reality, that all became really something we had to adapt to quickly. So the speed to me at which all this happened was really amazing.

Potts: Nick, what were the priorities that you had to communicate to consumers who all of a sudden, as Jon said, it's so sudden you became sort of the lifeline to people who were shut in?

Nick Bertram, The Giant Co.: I think that the profession of grocery is a noble one and has always been very important in the communities, but the level of listening that took place as this really came onto the scene changed everything. And so individuals who are working in grocery stores, whether they're stocking or the manager or whatever, they, all of a sudden became this source of information.

And one of the key things that I saw, not just at Giant, but really with everybody is the safety of our teammates. And that was a really, really important message to send out to consumers also to our teams, of course, but it denoted a lot more than just caring for people. There's a safety, there's a heightened standard of cleanliness and everything else. And we knew that that was going to be important. So we leaned into that pretty strongly at the very beginning of it. I think most retailers pride themselves on good quality assurance and food safety standards anyway, but when you have this unknown situation going on, the scrutiny that the general public has on all of those operations, it just heightens. And I think it was a bit of a calming mechanism for our consumers to know that we were taking it so seriously.

Potts: Dave, what about from OSI's perspective? When you realized things were really changing, how did it affect you?

Dave McDonald, OSI Group: We saw some things going on internationally and our colleagues as well in China sort of flagged this early to us. I will admit out of probably ignorance and uncertainty, I really recognized it as a supply chain disruption, initially. We looked at it as a regional event. Once Italy hit, it felt very global at that time. And so as we started to recognize the global nature of it, I think for us, it really became first prioritizing the safety of our team. That was really crucial — having visible cues, having town hall discussions, being able to put things in place. So our, family, our work teams recognizing there was a sincere and concerted effort to make their workplace safe was really critical. And that became prioritized. And then our customers became equally prioritized. 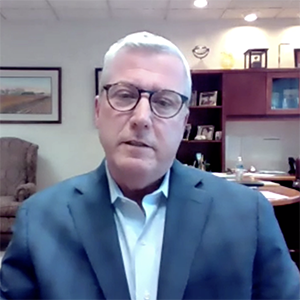 We've spent a great deal of time identifying how to keep our workplaces safe, how to keep those essential workers safe and keep operating, and then really working with our suppliers and our customers, both. It took a great deal of communication in a time where you couldn't get together. So the uncertainty was really sort of a barrier to getting that accomplished. I didn't know how to use Zoom at the time. I struggled with all of this stuff, but we got there and that communication and that honesty and the candor, with both our folks internally, but also our customers and our suppliers was really critical for us to be able to deliver those services, those products, and that safety to our team.

Bertram: I think we were all introduced very quickly to the acronym PPE, and we were also introduced to the fact that there was not nearly enough to go around. And it was a hard decision to first prioritize that for hospitals and other direct first responders while at the same time, trying to find ways to acquire enough, to protect our own teammates. It’s one of the good things about being part of an international company. We were able to source it from some of the other markets. And I remember specifically having to charter a plane, actually across all the companies, and go to get face masks because that's the only way to protect our teammates. And these are the kinds of stories that probably years from now, we'll all be talking about, "Remember when we did that, remember when we experienced that," but I saw no one, either that I compete with or that I partner with, the suppliers, no one inside of our industry did anything other than their very, very best to protect everyone. 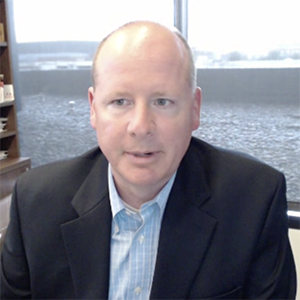 Nash: One of the things I'm also really proud of that's maybe underreported is our focus on the psychological safety of our teams. Our people were experiencing so much outside the workplace, let alone the pressures inside of the workplace, which were enormous as every one of us can attest to. But the fact that they were also facing challenges with schools and daycare and making sure that their people, that their families had food on the table, maybe some other family members were sick. So we had to educate our people as much as we possibly could and be highly empathetic to understanding the challenges they were facing. And so that element of psychological safety was incredibly important. Right along with the physical safety. And also doing the right thing from a benefits perspective, right? Making sure that they had leave if they needed to take care of family members that were sick or covering costs for them, flexibility as they needed to.

Potts: How did relationships with key suppliers help to ensure that the supply chain was flexible enough to withstand the challenge that we saw?

Morris: I'm going to speak specifically to our meat partners, but I'm so impressed with our total grocery industry and all of the partners, all of my competitors, how quickly and how effectively we all work together.

So we had many former colleagues who had transitioned over to foodservice, and we were able to quickly reach out to our existing partners, but also maybe friends of friends and contact others in the organization and different organizations who filtered prospects to us. We quickly assembled a command center, where we could immediately identify opportunities, interpret — there was a lot of interpretation that had to be done, right? Because the cuts that we're used to seeing, or the products we’re used to buying, we had to interpret product descriptions and then determine what the volume might be and redirect those items to areas that could utilize that product in our distribution network.

So our relationships and trust that we've established over the years allowed us to cut red tape in so many situations. We were able to divert loads destined for distributors, either directly to our stores in some cases, or to our distribution centers. And we're thankful for the transparency that our vendors provided. They obviously had some supply constraints from one end and then an excess from the other. So our packer community communication and partnerships were so important and that shift of demand to grocery was tremendous for us. And we really appreciate the partnership and the trust they showed in us to help them balance that inventory as we work to maintain a food supply across the country. 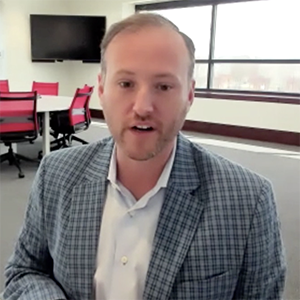 Bertram: We had to be flexible and when things didn't come in on time or as usual, whatever else, there had to be forgiveness. Everybody was trying their best. And so it really wasn't a time to penalize anybody for doing their very best, whether it's manufacturing, whether it's producing, whatever that looks like. And flexibility is what I think made the supply chain as durable as it could have possibly been during that time.