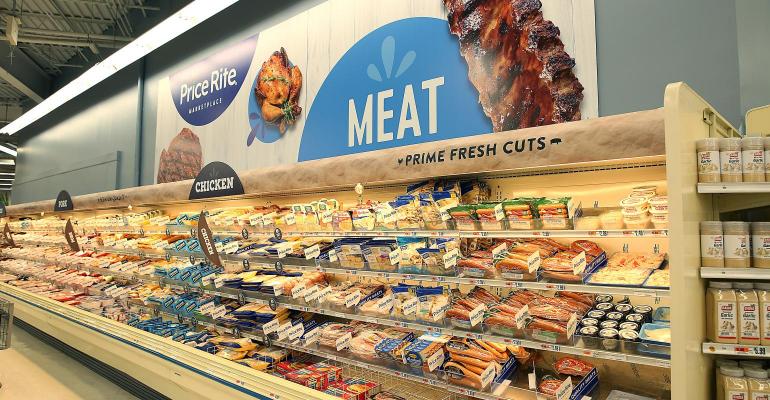 Price Rite
During March, beef and chicken saw the largest increases in terms of dollars, and turkey was the highest in percentage growth.
Product Categories>Meat

While meat sales continue to soar, a new project facilitated by Kansas State University’s Research and Extension and partly funded by the beef checkoff and the pork checkoff is showing some of the consumption pattern changes due to COVID-19. The Meat Demand Monitor (MDM) was launched in February and collects data from over 2,000 respondents each month.

Given data is collected daily over an extended period for most days each month. K-State said some of the latest information collected is providing insight on how consumer patterns are changing with the COVID-19 situation.

Related: How will the fear of a coronavirus-based recession affect meat sales?

Given the increase in at-home food consumption, the survey further examined trends in how beef and pork is being consumed, by meal over the same period.

What it found is that beef has regularly been the most frequently included in dinner meals. Meanwhile, the share of respondents consuming pork the prior day has increased recently for all three meals. 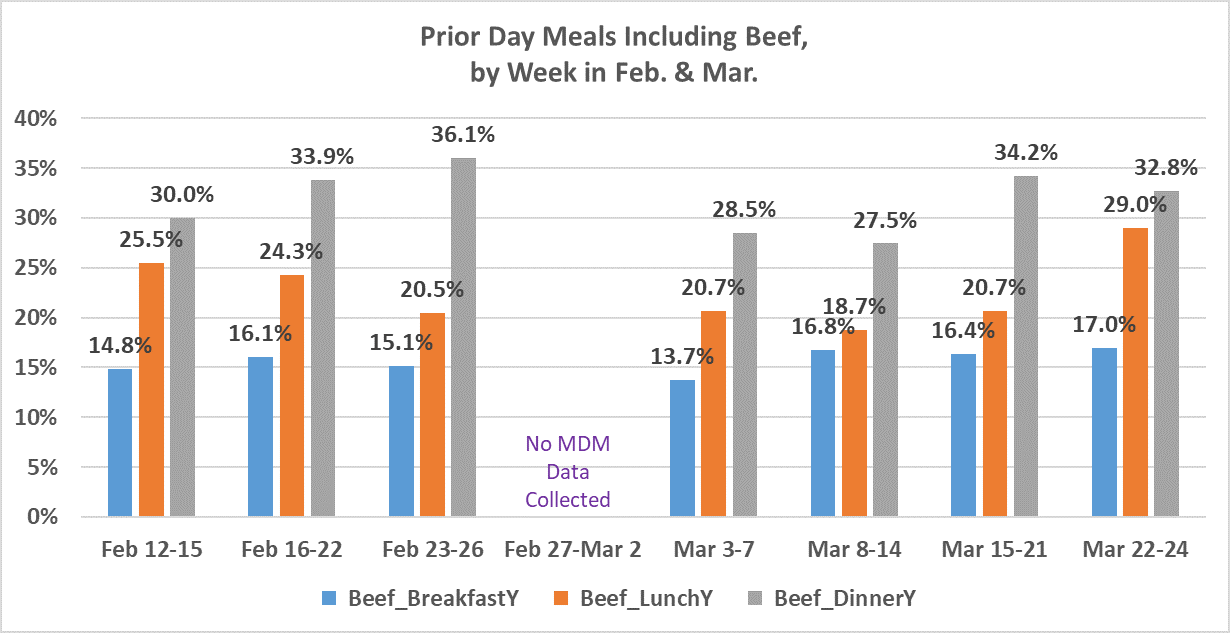 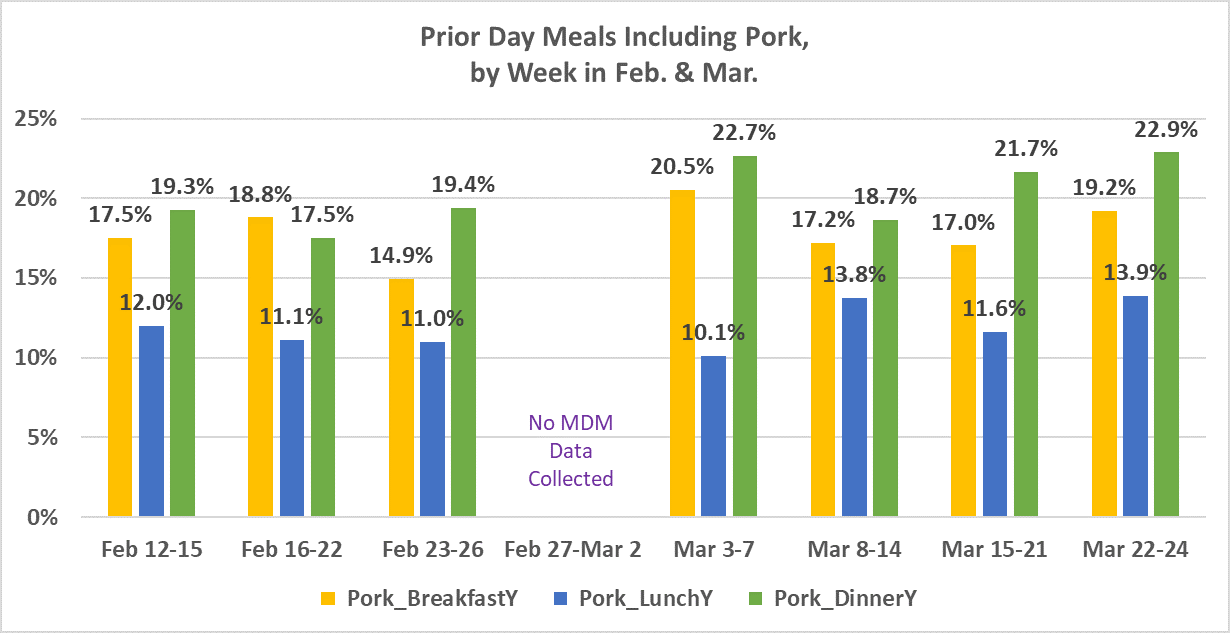 While beef has regularly been the most frequently meat included in dinner meals, the share of respondents consuming pork has increased recently for all three meals.

Grocery sales continue to soar as Americans remain hunkered down amid the growing number of confirmed COVID-19 cases. According to newly released data from IRI, meat has been the leading sales driver for the perimeter, up by 91% year over year for the week ending March 22, with volume sales up 78%. 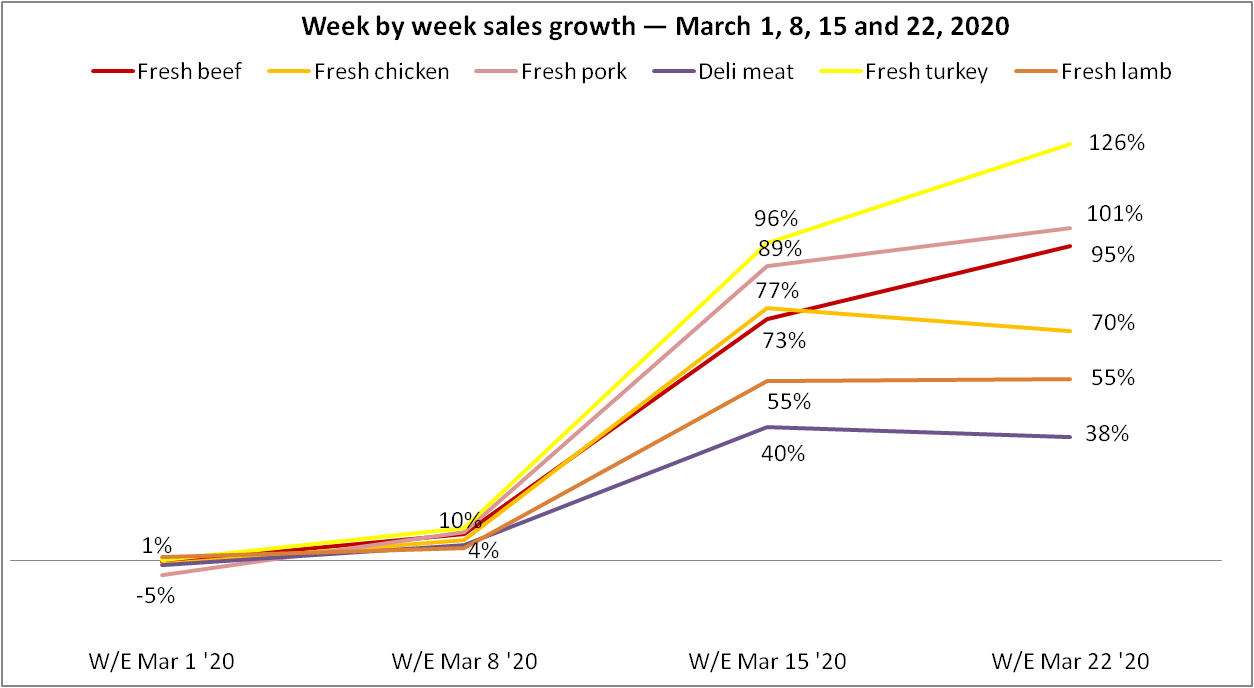 Meat has been the leading sales driver for the supermarket perimeter, up by 91% year over year for the week ending March 22, with volume sales up 78%.

She relayed that meat sales among regional and independent grocers were particularly strong during the week ending March 22, with consumer demand often exceeding the offering.

“Our demand on orders has been as high as 600% over the norm for some of our independent grocer customers,” relayed a meat and seafood director for a large wholesaler. “We ran at double the sales volume and could have tripled it if we had had product and selection time. The attendance in our warehouses was excellent and stores are getting caught up.”

Still, Roerink said beef and chicken saw the largest increases in terms of dollars, and turkey was once again the highest in percentage growth. In absolute dollars, the five biggest winners for the week of March 22 were ground beef (>$180 million more versus the comparable week in 2019), chicken breasts (>$75 million), pork loin (>$40 million), beef short loin (nearly $40 million) and beef chuck (>$35 million), according to IRI. The other items making up the top 10 were ribeyes, beef round, chicken wings, recipe-ready beef and pork ribs.