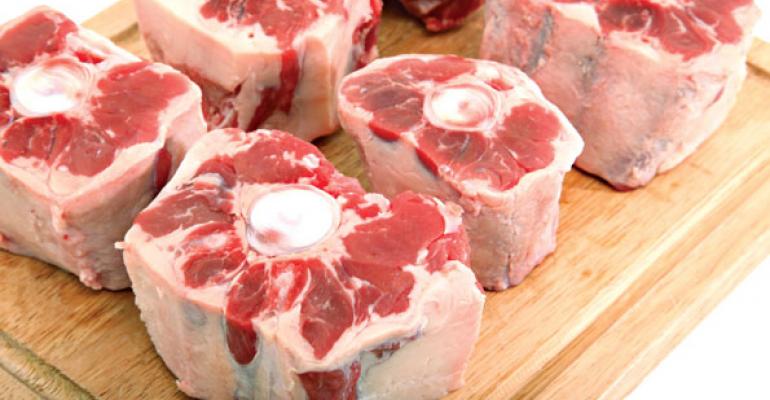 The Other Cuts: Ethnic Meat Cuts Could Appear in Mainstream Meals

From oxtail to tripe to lamb ribs, specialty meat cuts have been making their way onto more fine dining menus and into artisanal butcher shops in urban areas.

Part of the appeal of these cuts in these restaurants and butchers is they often come from specially treated or heritage animals.

Take, for instance, The Meat Hook in Brooklyn, N.Y., which only receives whole animals from small local farms, according to its website, so the meat is entirely cut in-store.

In addition to the usual steaks and house-made sausages, it's not unusual to see meat items like oxtail, chuck steaks, fat and goat in the meat case. Since whole animals need to be used, the butcher sells prepared foods like broths and scrapple from the animal leftovers, and even offers dried pig ears for dogs.

Customers pay a premium for The Meat Hook's products — even stew meat can run as high as $9.99 per pound.

For specialty cuts on menus, Melissa Abbott, director of culinary insights at the Hartman Group, Bellevue, Wash., pointed to a homemade spam steak made with Berkshire pork, a heritage breed, at the Palace Kitchen, a restaurant in Seattle.

The major metropolitan areas always tend to have this kind of restaurant trend first, Abbott told SN. The question is always whether the trend trickles out to the mainstream, she said.

For the spam steak, “Is that going leach out to the mainstream? Maybe something like that could,” she said.

According to Abbott, menu items at the Animal Restaurant, Los Angeles, which include items like duck necks, trotters (pigs feet) and pig tails might take significantly longer to catch on with shoppers.

While it's unclear how eagerly mainstream consumers may embrace these cuts, variety cuts remain a staple in ethnic cuisines. And, retailers have been making sure to adapt their meat department offerings to meet consumer needs in communities with different demographics.

Tops Friendly Markets, Williamsville, N.Y., offers over 50 different cuts in the variety meat segment, according to Jim Lane, director of meat and seafood.

Tops' takes its slogan “Your Neighborhood Store With More” to heart. Each store's variety meat offerings depend on the unique interest of the consumers in the specific area.

“So we really try to apply all our marketing and our merchandising towards the individual neighborhoods, so some stores may have more of this type of meat than others, but we do consistently try to have this product available for the customers,” said Lane.

Lane said ethnic pockets in urban neighborhoods tend to be the most interested in variety meats. This interest is not a new trend, he said.

“It really has to do with the customers are used to eating and the way they're bought up and their heritage,” Lane told SN.

“But we do offer a different product mix for the African American customer than we would a Hispanic. There's just different things that different people enjoy, and we try to have those in the store.”

For instance, Lane said Tops offers items from chicken feet to salmon heads for Asian communities, salted fish and different kinds of pork for the Hispanic and Latino communities and smoked meat and spicy meats like beef sausage for African American communities.

Lane said different kinds of bones for soups and short ribs are popular with mainstream consumers.

For other specialty cuts, Lane doesn't see them going mainstream anytime soon. “That would be challenging, at least in my view.”

“We want to make sure each Jewel-Osco store meets the unique needs of the community it serves,” said Karen May, Jewel-Osco's external communications manager. “Therefore, the variety of items and cuts offered will vary based on customer demand and the neighborhood surrounding a particular store.”

Shoppers may be turning more to these specialty items as they become more readily available.

“Shopper interest in our specialty cuts has increased as customers realize our stores are able to meet their needs,” May said.

Scott Nettles, business director for meat and seafood at United Supermarkets, Lubbock, Texas, suggested the economy has influenced the strong continued interest in these cuts, which tend to have a lower retail price.

“They have been a staple for our stores for many years, chiefly because of the large Hispanic population in most of our trade areas.”

The increasing influence of Hispanic consumers can also be seen in Tops' New York and Pennsylvania stores.

“We have about 30% of our stores that have Hispanic influence in them. That's growing. That's probably our number one [growth] demographic,” said Lane.

At Publix Super Markets, Lakeland, Fla., specialty cuts are popular with all customers, according to Maria Brous, director of media and community relations.

“We have found that our customers as a whole enjoy the selections we offer in our specialty cases,” she said.

One item popular at Publix Sabor is “La Bola” — a versatile bulk beef item. Brous said that customers can cut “La Bola” into steaks, grind it, or cube it for stew.

So why are these variety cuts, popular in ethnic cuisine, but neglected by the mainstream, suddenly getting attention at trend-setting restaurants?

“Well there's the one issue of, you have a lot of media attention around it so you've got Anthony Bourdain … whose been talking about the ‘nasty bits’ since he wrote his first book,” said Abbott.

“And when he goes around the globe he'll try cheaper cuts and things and kind of drill it into the consumer's head, for his audience anyway, and he's got a pretty wide audience.”

“And you've got chefs like Rick Bayless and the Two Hot Tamales' Susan Feniger and Mary Sue Milliken promoting, for years now, promoting skirt steak. And now you can get it at a lot of supermarket meat counters,” said Abbott, who also noted that since Bayless promotes both mainstream and specialty cuts, he establishes a comfort factor for consumers.

Abbott also credited the rise of gastro pubs like The Spotted Pig in New York for expanding the specialty meat category. The Spotted Pig recently offered an oxtail bruschetta with parsley and tarragon on its menu, according to a report from Mintel.

Although it's hard to tell which cuts might become popular with the mainstream, Abbott said oxtail could be one.

“I can definitely see oxtail becoming something that mainstream consumers might want to include in more recipes, because it's something that they'll look to as a traditional kind of recipe that they can throw into a stew or a soup.”

As for meat cuts that supermarkets should strongly consider offering, she suggested pork belly — which has been available to consumers on many different menus — and hangar steak.

Hangar steak is “hard to find at a lot of supermarkets, and it's such a common dish at French bistros,” she said.

“There's reverence now for the animals themselves. Increasingly, it's not just the idea of you're getting a chop or a sirloin cut in a Styrofoam package with plastic wrap anymore,” she said.

Jennifer McLagan, author of the recently published cookbook “Odd Bits: How to Cook the Rest of the Animal” that focuses on cooking variety cuts, agrees.

“With the prices of humanely raised meat rising people are looking for more economical cuts, and many odd bits fit the bill. Also, people are realizing that they must cook and eat all the animal. It is neither ethical or economical to dismiss variety cuts,” she said.

Variety cuts used to be popular in the U.S., and McLagen believes they will gain popularity again.

Still, these cuts face challenges with the average consumer.

“I think there is a challenge of perception. Many people think they don't like them without every having tried them. There is also the challenge of supply. Many odd bits are hard to get because there is a small demand for them,” said McLagan.

Like celebrity chefs, supermarkets may be able to market these meat cuts by making consumers comfortable with them.

“There's nothing wrong with renaming things and having a bit of playful fun with [these kinds of items],” said Abbott.