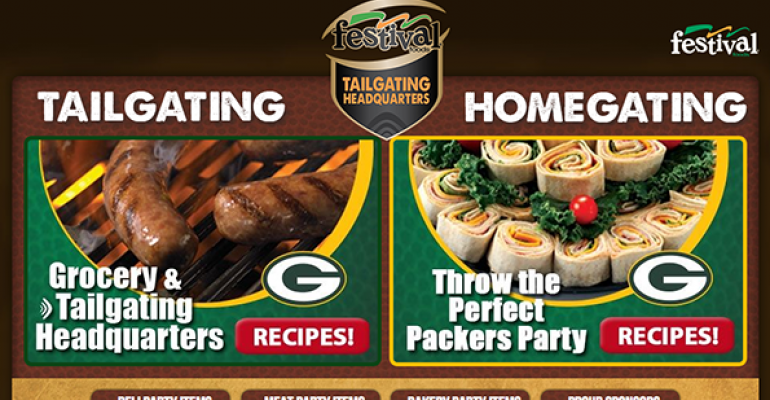 <p>Festival Foods has a special website with recipes and tips for tailgating and at-home football watching parties.</p>
Product Categories>Meat

Football fans at Lambeau Field in Green Bay, Wis., might notice some unusual formations this season — not on the football field itself, but in the parking lots.

That’s where tailgaters are serving up some of the newest creations of Festival Foods, the local retailer that is the official “tailgating headquarters” and the official supermarket for the Green Bay Packers.

“In Green Bay, tailgating is huge for the Packers, and everyone is always trying to do something a little different, and maybe show up their neighbors,” said Nick Arlt, director of public relations and brand strategy at Festival Foods. “That is where items like our Tomahawk steak and our Towering T-bone come into play. They are great items for tailgating.”

The Tomahawk steak is a large, bone-in rib-eye shaped like a tomahawk. The Towering T-bone, meanwhile, is cut so that the bone sticks up vertically over the grill.

“You can cook it over indirect heat, so it’s perfect for the grill,” said Arlt. “Then you can carve it off and give people chunks of it.”

Other specialty meat items Festival promotes for tailgating season include “Ribs on a Stick,” which is a boneless, center cut pork loin impaled with wooden skewers. It can be placed on the grill, then sliced up into individual “ribs” and eaten right off the stick without utensils.

Festival’s meat department also gets a boost from its status as the provider of the official burger for Lambeau Field — the Festy Burger — available in regular and several flavored varieties, such as bacon and cheddar, with those ingredients ground up into the beef.

(Through a partnership with Kretschmar, a John Morrell Food Group deli brand, Festival is also the provider of the official deli meat of Lambeau Field.)

The chain promotes both tailgating and “homegating” via a special website at festivaltailgating.com, which includes recipes and tips.

Jack Gridley, VP of meat and seafood at Dorothy Lane Markets in Dayton, Ohio, said offering a variety of options for tailgaters week to week is key. His stores supply fans of the NFL’s Cincinnati Bengals and also the Ohio State Buckeyes on the college level, both of which got off to a strong start this year.

“We are looking at a great season of weekend sales, thanks to football,” Gridley told SN.

Gridley recently received a shipment of Alaska King Crab legs from a “test boat” — a vessel that went out ahead of the traditional season — and was planning to put them on display in time for tailgating stock-ups.

“You will find some fresh Alaskan King Crab legs being eaten at Bengals Stadium, I guarantee it,” he said.

In the New Orleans area, Rouses Markets sees a lot of success promoting value-added products for tailgating parties, according to James Breuhl, meat and seafood director at the Thibodaux, La.-based chain.

“They sell well, and are an easy item to manage for our customers,” he said.

This season, Rouses is promoting its “smokehouse” meat cases in its stores, featuring tailgating items such as stuffed mushrooms, stuffed steak jalapeños, seasoned meats and a wide variety of grilling items.

Rouses uses social media to promote tailgating items in time for game day, and also stages some unique promotions, such as a grill give-away and free tailgate packages.

Meanwhile fans in New York and Philadelphia may have noticed meat-centric ads, including spots during Monday Night Football, for online grocer FreshDirect’s tailgating offerings this season.

“This year, we are serving up game-day fare via several out-of-home ads in Philadelphia, a game day section on FreshDirect.com, as well as a commercial TV spot that features tailgating,” said Lisa Kolodny, vice president, brand and communications, FreshDirect.

She noted that the TV spot also recently launched on the company’s Instagram feed.

GAME ON! Let us help you conquer your game-watching #eats. What are you snacking on today? Let us know in the comments! #tailgate #football #sundayfunday