/sites/all/themes/penton_subtheme_supermarketnews/images/logos/footer.png
Recent
Recent
Musings on rotisserie chicken of yore
Jan 26, 2023
The first smaller format Meijer Grocery stores open in Michigan
Jan 26, 2023
Podcast: Foodservice at retail ramps up
Jan 26, 2023
Retailers were eager to be back together at the 21st annual Friends dinner at FMI
Jan 24, 2023
Amazon launches RxPass
Jan 24, 2023
Featured
5 things: The rotisserie chicken wars
Jan 20, 2023
Podcast: Was this a good year or bad year for the industry?
Jan 12, 2023
Kroger and Albertsons merger: What lies ahead?
Dec 13, 2022
Are we on the verge of a new grocery landscape?
Dec 06, 2022
Product Categories>Meat 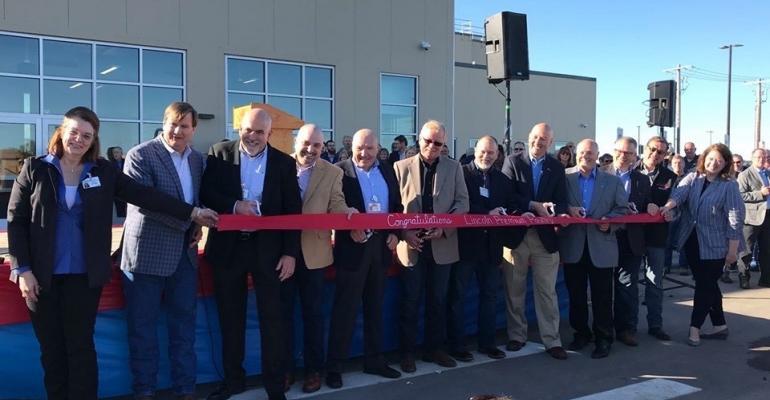 Start Slideshow ›
Over $450 million has been invested in the feed mill, hatchery and processing plant.

A momentous day for Lincoln Premium Poultry and Costco occurred Oct. 19, when company and state leaders gathered for the official ribbon-cutting ceremony for the new, state-of-the-art Costco poultry processing facility in Fremont, Neb.

“Over four-and-a-half years ago, we started this journey, and the project has finally come to reality,” said Fremont mayor Scott Getzschman. “Over $450 million has been invested in the feed mill, the hatchery and the processing plant.”

Collectively, growers will invest another $350 million, he added.

Getzschman said the project is an “amazing feat and one that no one took lightly.”

When fully operational, the project will raise 2 million birds weekly to supply the plant.

Currently, the plant employs over 600 employed, with many coming from within a 30-mile radius. Nearly 1,100 employees are expected when the plant is fully staffed, and approximately 100 farm families will be supplying the plant.

He noted that a half million birds have already gone through the facility. “Without our farmers, we wouldn’t be here today.”

“There were a lot of obstacles, but we never gave up.”

Gov. Pete Ricketts attended the event, congratulating the companies and community on the historic moment.

Further, Ricketts said the project is expected to have an over $1 billion impact on the state of the Nebraska.