NEW YORK — Consumers Union delivered more than 500,000 signatures to a Trader Joe’s unit in Manhattan as part of its recently launched Meat Without Drugs campaign.

The event included a press conference in which CU — publisher of the popular Consumers Report magazine — called on the retailer to stop selling meat from animals raised on antibiotics.

The petition drive and the public delivery of the signatures marks a departure from the non-profit organization’s starchy history of seeking change through government regulation. The more assertive stance of approaching companies directly is the result of frustration at the slow pace at the Food and Drug Administration and livestock industry are taking to crack down on antibiotic use, officials said. 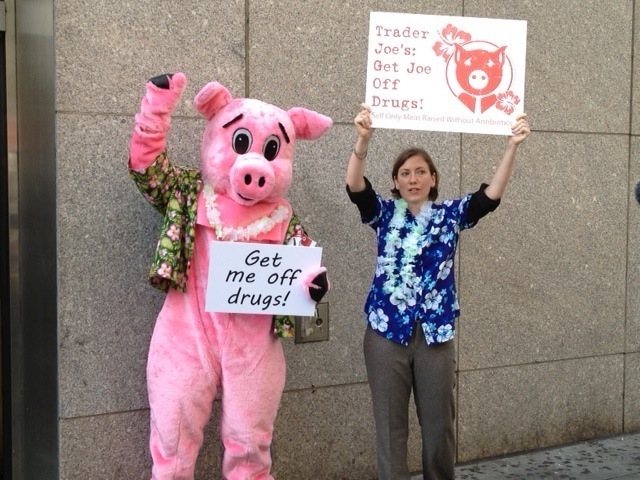 “The government is not fixing it, the livestock and drug companies are not going to do this on their own, but the buying public can,” said Jean Halloran, CU’s director of food policy initiatives. “And supermarkets are the agent of the buying public.”

A report on antibiotics and shopper attitudes about their use in livestock was published in June. Consumers Union sent secret shoppers to purchase meat and poultry in 126 supermarkets in 23 states, including items from the top 13 chains in the country. Retailers included not only Trader Joe’s but Giant, Hannaford, Shaw’s, Stop & Shop, Sam’s Club, Food 4 Less, Food Lion, and Save-A-Lot.

The report noted that noted that 86% of consumers polled want the choice of purchasing antibiotic-free meat and poultry, and more than 60% said they would be willing to pay up to five cents more a pound for the option.