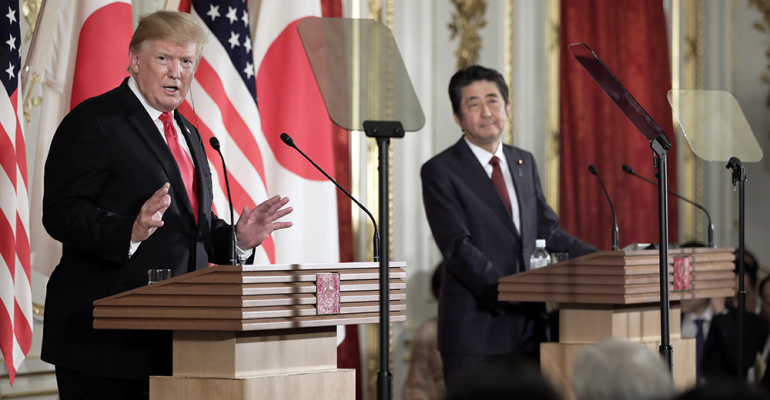 While speaking in Japan, Trump also said there's a “very good chance” a deal with China can be brokered

Over the weekend, President Donald Trump spent time in Japan and said great progress was made in trade negotiations with the island nation.

In a joint conference with Japan's Prime Minister Shinzo Abe, Trump said the goal of the joint negotiations is to reduce the trade deficit with Japan and remove trade barriers -- and barriers of all kinds -- so U.S. exports will have a fair and profound footing.

“Just over one week ago, U.S. beef gained full access to Japanese markets for the first time since 2003. We hope to have even more to announce on the trade very, very soon,” Trump said in the joint press conference with Abe. In a tweet earlier during the trip, he said much of the progress on trade will come after the July elections.

Great progress being made in our Trade Negotiations with Japan. Agriculture and beef heavily in play. Much will wait until after their July elections where I anticipate big numbers!

U.S. Meat Export Federation (USMEF) president and chief executive officer Dan Halstrom said he is encouraged by the recent launch of U.S.-Japan trade negotiations, noting that Japan’s new trade agreements with the European Union and countries participating in the Comprehensive & Progressive Agreement for Trans-Pacific Partnership (CPTPP) have put U.S. pork and beef at a significant disadvantage in the leading value market for both products.

Halstrom added that gaining access to Japan for U.S. beef from cattle of all ages, which was announced last week and took effect May 20, will provide immediate, added momentum for U.S. beef exports.

According to Iowa State University economist Dr. Dermot Hayes, U.S. pork will see exports to Japan grow from $1.6 billion in 2018 to more than $2.2 billion over the next 15 years if the U.S. quickly gains access on par with international competitors. Hayes reported that U.S. pork shipments to Japan will drop to $349 million if a trade deal with Japan on these terms is not reached quickly.

While speaking in Japan, Trump also took the opportunity to discuss the ongoing holdup on negotiations with China.

“As far as China is concerned, they want to make a deal,” Trump said. “I think they probably wish they made the deal that they had on the table before they tried to renegotiate it. They would like to make a deal. We’re not ready to make a deal, and we’re taking in tens of billions of dollars of tariffs, and that number could go up very, very substantially very easily, but I think sometime in the future, China and the United States will absolutely have a great trade deal, and we look forward to that.”

Trump also praised American farmers, calling them patriots several times, for continuing to support efforts to hold China accountable. He said the farmers he has met with continue to say they don’t want subsidies. “They want a level playing field. That’s all they want, because they’re better than anybody in the world,” Trump said.

However, the Trump Administration has offered another round of subsidies to aid farmers faced with a tariff-constrained Chinese export market for many agricultural goods. Trump claims that the tariffs on China are bringing in “tens of billions of dollars” and that the $16.5 billion trade aid package is a “relatively small percentage” for U.S. farmers.

“As you know, they’ve earmarked and they’ve gone after the farmer, thinking that if they hurt the farmer, I’m going to negotiate a bad deal for the rest of the country,” Trump said of China’s retaliatory actions. Trump said he’s giving the subsidies to farmers while China takes advantage of the U.S. and farmers in particular.

“I believe that we will have a very good deal with China sometime into the future, because I don’t believe that China can continue to pay these, really, hundreds of billions of dollars in tariffs,” Trump added.