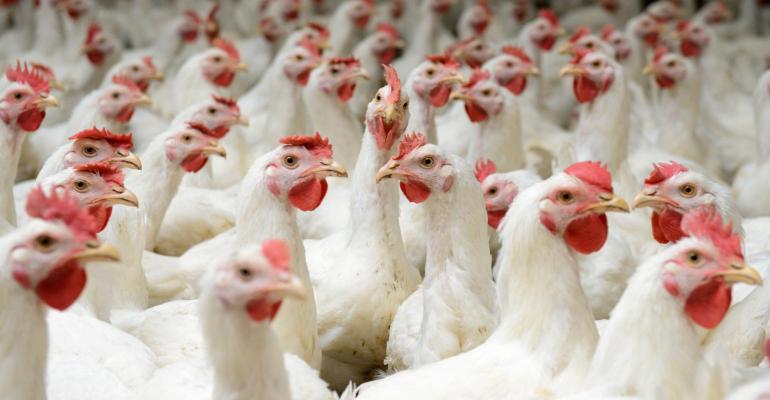 Buhanovskiy/iStock/Thinkstock
The USDA raised its 2020 broiler production forecast to 44.91 billion lb. based on recent hatchery data that points to continued expansion of laying flocks.
Product Categories>Meat

The U.S. Department of Agriculture, in its January “World Agricultural Supply & Demand Estimates” report, lowered the 2019 total red meat and poultry production estimate from the previous month due to reduced pork and turkey production, which more than offset higher beef production.

For 2020, the total red meat and poultry production forecast was increased fractionally from last month to 104.83 billion lb. as higher broiler production is expected to more than offset lower beef, pork and turkey production.

The pork production forecast for 2020 was reduced to 28.66 billion lb. from the previous month.

The egg production forecast was raised to 9.51 billion doz. due to gains in the laying flock.

For 2020, USDA raised the first-quarter cattle price, reflecting current early-year price strength. As such, the 2020 price forecast for cattle prices rose to $117.50/cwt. First-half hog price forecasts were reduced based on current prices and increased production. The 2020 hog price was lowered to $54.50/cwt.

Milk production forecasts for 2019 and 2020 were lowered from December figures based on slower expected growth in milk output per cow. Dairy product price estimates for 2019 include December price data. For 2020, cheese, butter and whey price forecasts were reduced on demand weakness and relatively high stocks. The nonfat dry milk price forecast was raised from December on continued strength in demand from export markets. The Class III price and Class IV price were lowered from the previous month. The 2019 all milk estimate was unchanged at $18.60, but the 2020 all milk price forecast was reduced to $19.25/cwt.