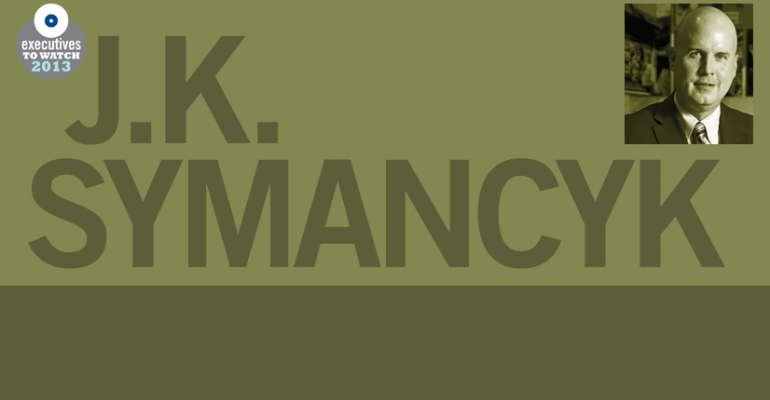 J.K. Symancyk Will Be Managing Growth at Meijer

&ldquo;I think the ability to be part of a great team of people, at a company that has the backing of private family ownership that shares that desire to do what&rsquo;s right for customers, is truly a unique spot in retail, and one that makes Meijer a very special place.&quot; &mdash; J.K. Symancyk, president, Meijer

GRAND RAPIDS, Mich. — J.K. Symancyk just got the role of a lifetime.

A former theater major in his undergraduate days in college, the new president of Meijer Inc. here is now playing a leading part in a performance that spans some 200 stores and five different states, and is continuing to grow.

“I think the ability to be part of a great team of people, at a company that has the backing of private family ownership that shares that desire to do what’s right for customers, is truly a unique spot in retail, and one that makes Meijer a very special place,” Symancyk told SN last week.

Symancyk spent most of his career with Wal-Mart Stores and its Sam’s Club division before joining Meijer in 2006. He was promoted to chief operating officer last year and was named president of the company just last month.

When he joined Meijer, one of the first interviews he had was with former company chairman Fred Meijer, who died in 2011.

“I had a great opportunity to work for a period of time with the patriarch of the company, and was able to get a first-hand understanding of the culture of this company,” Symancyk explained. “There is a singular focus on how to better serve customers, and that is something that is a really special thing to be a part of.”

“He’s very good at understanding people, relating with people, and at trying to bring different people together to coalesce around practical solutions,” he said.

Symancyk steps into the president’s role, with responsibilities for all of its day-to-day operations, as it is seeking to continue its expansion. The company earlier this month unveiled plans to invest $160 million on 11 new and remodeled stores in 2013.

It has added about 40 net new locations since 2004, including an expansion into the Chicago market. It is expected to soon expand beyond Chicago into Wisconsin.

“We are in a strong period of growth, and I have the good fortune of transitioning behind a leader who has made a tremendous impact on our business, and has been a good mentor to me and to a lot of people in our company,” Symancyk said of his predecessor in the president’s role, Mark Murray, who has been named co-chief executive officer.

'A Whole New Set of Challenges'

“The company’s in a good position, but faces a whole new set of challenges around growth,” Symancyk said. “So the question is, how do we build on that in such a way so that we maintain momentum, and continue to grow in a responsible and a sustainable way, both for our team members and our customers. That is the thing I am most focused on.”

Symancyk explained that one of the things Meijer focuses on wherever it goes is being “good citizens” of the communities where it operates.

As Meijer eyes new markets for potential expansion, Symancyk said there are nuances and complexities involved with understanding individual markets whenever it opens a store, whether it is a new market or one where it is already established.

“I think there will continue to be good opportunities for Meijer as a retailer,” he said. “As a company, we work to deliver value, both in price and quality. I think for us, or any retailer, the challenge is how do you answer the equation that solves both those variables.”

He said he remains confident in Meijer’s ability to continue to grow, because of the strength of the employee base and the company’s strong focus on serving customers.

“We don’t always get it right, but that singular focus helps us recognize when we don’t get it right, and look for more ways to improve on it each and every day,” Symancyk said. “So I absolutely feel good that we have a team that is energized around that focus, and is excited about what they have accomplished, and even more excited about what’s yet to come, and that’s really the lifeblood of our company.”