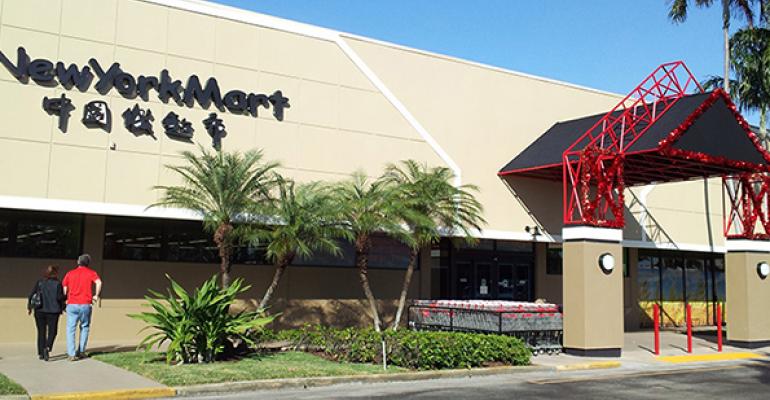 The acquirer of a family-run chain of Chinese supermarkets intends to become a major consolidator of food stores serving fast-growing Chinese-American populations in the U.S.

E-Compass Acquisition Corp. announced intentions to merge with NYM Holdings, the Long Island City, N.Y.-based operator of eight supermarkets doing business under the New York Mart banner, in July. This week, E-Compass filed to register stock to pay for the $125 million deal, and said the combined companies, to be known as iFresh Inc. planned to add 31 new stores, most by acquisition, over the coming three years.

The company in the registration statement said it would look to acquire or build stores along the I-95 corridor on the East Coast, and also look to markets in Chicago and Texas.

New York Mart operates supermarkets in New York, Massachusetts, Maryland and Florida, and has stores in Connecticut and Florida coming soon, according to its website. It also has in-house wholesale businesses supplying its stores, as well as other retailers, restaurants and wholesalers. Annual sales were $131.2 million and net income was $3.6 million for the fiscal year ended March 31. Stores average 15,000 square feet.

According to the filing, iFresh sees opportunity to consolidate a fast growing but highly fragmented market for Chinese groceries in the U.S.

"Most competitors are unsophisticated family businesses or single-store operations," it noted. "Moreover, according to Nielsen Report 2015, the U.S. Chinese population grew 14.3% between 2010 and 2014, which far exceeded the overall U.S. population growth rate of 3.1%. The Asian-American population, of which the Chinese-American population accounts for approximately 23.9%, is expected to grow 150% between 2014 and 2050."

The company also touted advantages against traditional channels of trade like conventional supermarkets. Chinese eating habits, the company noted, "generally continue for generations after immigration, include a preference for live fish and seafood, various animal parts and organs, and exotic and specialty fruits and vegetables. Therefore, we believe that most Chinese Americans are unsatisfied with the current offerings by American mainstream grocery stores. The unique cultural demands form a natural barrier to entry."

Mainstream U.S. supermarkets also tend to serve Chinese-American shoppers by relying on imported goods from China, which can limit their ability to provide fresh foods, whereas New York Mart relies on imports as well as relationships with U.S.-based specialty farms, orchards, and seafood harvesting facilities in New Jersey and Florida.

The company said typical new stores require a net cash investment of approximately $2.5 million, including acquisition cost, renovation and working capital. Such a store would be expected to achieve sales of $9 million, $16 million and $17 million in its first three years of operation, and adjusted EBITDA of $300,000, $1 million and $1.2 million for the respective periods.

The largest Chinese supermarket chain in the U.S. is Westminster, Calif.-based Tawa Inc., parent of 39 stores doing business under the 99 Ranch banner.