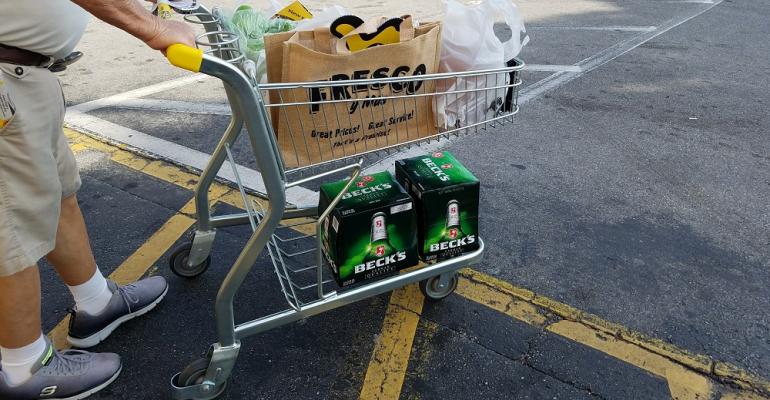 Ian McLeod, who jokes that his thick Scottish accent occasionally makes his English difficult for Americans to understand, on Wednesday morning delivered a welcome speech to shoppers and employees of the company’s new Fresco Y Mas store in West Miami in fluent Spanish — an appropriate gesture at the site of a native store that also abruptly switched tongues.

The night before, as workers completed a fast but thorough renovation of the store, which had traded as Winn-Dixie for years, McLeod gave me a tour highlighting the merchandising and assortment changes he was confident the area’s largely Hispanic shoppers would like. In the cleaning-products aisle was a pallet containing thin orange cloths stacked four feet high. These, McLeod explained, were for use with wooden Cuban mops resembling croquet mallets and favored for cleaning tile floors. The cloths were priced at two for $1.

The meat department showcased 25-pound slabs of beef. Customers will ask the butchers to cut some of it for steaks, some for roasts and ground the rest, McLeod said, “but it’s important for them to know it all comes from the same piece of meat.”

In the beer aisle were massive displays of green-bottled European export beers — Beck’s and Heineken. These brands, he noted, were particularly popular with Hispanic shoppers. Customers' steaks, roasts and ground beef come from the cut of meat.

As McLeod gave his speech the following morning, I don’t know if I saw a single shopper whose cart didn’t include a few of those orange mop cloths inside, and many had not one but two Beck’s 12-packs riding in the rack below. The line at the meat counter was 10-deep as butchers broke down big blocks for them, precisely as McLeod had predicted they would.

Winn-Dixie’s recent history of struggles draws its share of skeptics, but it’s new store, like it’s creative CEO, appears to speak Spanish fluently. I asked a woman with an orange mop cloth in her cart her impressions. “Bueno, bueno, bueno,” she replied.

Why certain Winn-Dixies were struggling in the Miami area became apparent to me when I stopped in a Wal-Mart Supercenter in Doral to pick up a few items. On a Tuesday night, the parking lot was jammed and so were check stands, Walmart’s service initiatives notwithstanding. This store was doing serious volumes.

My trip to Florida this week also included visits at two locations of Lucky’s Market, including a Plantation store that also opened for the first time Wednesday; and a Coral Springs Lucky’s store that opened in April. That store, Lucky’s people said, was more than holding its own against neighbors Fresh Market and Walmart Neighborhood Market.

The Plantation Lucky’s — buzzing with beer-drinking shoppers exploring and enjoying grand opening samples — stood in sharp relief to its across-the-street neighbor, a six-year-old Publix store so clean you could have told me it was also opening that day and I’d have believed you. A manager in a crisp white shirt and tie contrasted his counterparts at Lucky’s dressed in mechanic-style coveralls.

Publix, whose consistency of execution and store atmosphere is legend, is also a reason why it has so few direct competitors and so many niche challengers in Florida, including now Lucky’s and Southeastern’s specialty banners. What they all have in common is a passion to hit their target.