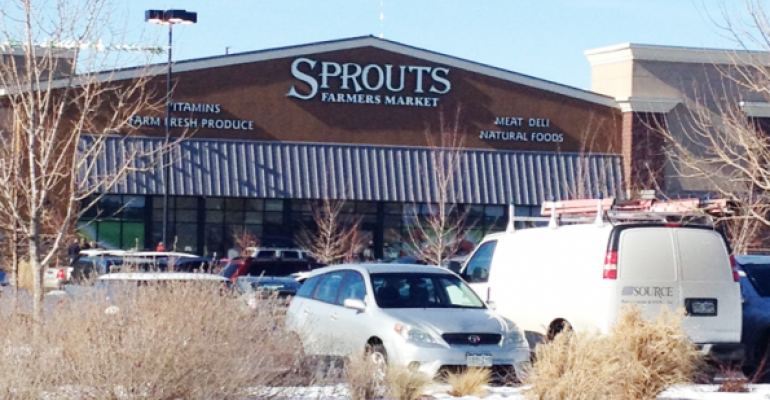 Pressure on comp sales at Sprouts Farmers Markets arrived as a result of produce price deflation, cannibalization from its own new stores — and an unexpected dinosaur attack.

Price competition from conventional supermarkets — particularly in the fresh produce and meat categories where Sprouts aspires to price leadership — was a factor leading to disappointing quarterly financial results announced Thursday. As reported in SN, Phoenix-based Sprouts missed its own comp guidance for the second quarter ended June 28, saying stores open for a year saw sales increase 5% vs. a 5.5% to 6.5% forecast. Price investments in the meantime pressured earnings, leading to a reduced forecast for earnings for the year.

Amin Maredia, Sprouts’ CFO who was promoted to CEO this week, in a conference call discussing results said Sprouts was experiencing more price competition in produce and fresh items from conventional supermarkets, to which it responded.

“From a visibility of competition standpoint, we really look at price competitively — as you know, our model is built on health and value, and we position to be both every day,” Maredia said.

“We’ve seen a little bit more aggressive approach on promotions in the produce and meat side,” added Jim Nielsen, COO and newly named president. “And we would anticipate to see that through [the current] Q3 and possibly through Q4.”

“While we continue to believe that [Sprouts] is a strong growth story with high [returns] unfortunately the ‘dinosaurs’ are far from extinct and are copying SFM’s strategy,” Karen Short, an analyst for Deutsche Bank, said in a research note. “And in many cases, these dinosaurs have deep pockets and greater geographic diversity, which enables them to direct promotions tactically.”

Although Sprouts was anticipating produce price deflation it experienced in the first quarter to subside, the company experienced overall deflation of around 1% during the quarter, leading to a comp hit of about 2%, Maredia said. Officials also acknowledged Sprouts was experiencing cannibalization as it expands.

Nielsen maintained however that Sprouts was not slowing a rapid store rollout, with 62 sites approved and 47 leases signed by the end of the quarter. “We’re not going to pass on great sites in existing markets,” he said, “but we want to be more aware of the what level of cannibalization to expect.”

Despite the headwinds, Sprouts grew overall tonnage in the quarter and saw its best results in items-per-basket in two years, officials said. Bill Kirk, an analyst with RBC Capital, said these were “hidden strengths” in the quarter.

“Sprouts had more people in the stores filling their baskets with more stuff. It did this at the best rate seen in the last four quarters,” Kirk wrote in a note to clients. “We consider this the controllable part of the business model and gives us confidence that when inflation returns, P&L leverage will be strong.”

The new supernaturals
Feb 24, 2014
Sprouts plants fresh-focused stores across the South
May 26, 2015