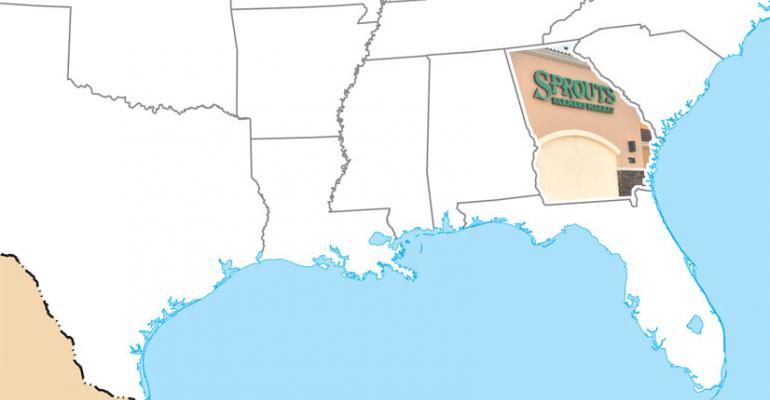 Sprouts Farmers Market unveiled the locations of five stores it plans to open in the Atlanta market in 2014 — its first venture east of the Mississippi — in what could be the beginning of a much greater expansion effort in the region.

“Atlanta is similar to a lot of other markets we’re in, in terms of the customers there,” Doug Sanders, president and CEO of Sprouts, told SN.

The fast-growing chain, based in Phoenix, distinguishes itself by seeking to simultaneously focus on value, perishables — particularly produce — and health and wellness.

“We’ve done a lot of due diligence on the Southeast, and we think Atlanta is kind of the center of that region,” Sanders said.

Sanders described the company’s plans for Atlanta in a recent conference call with investors.

“We’re very excited about our planned 2014 entry into the Atlanta market, and believe our concept will be well-received as it has been in previous new markets,” he said. “We’ll develop Atlanta similar to our strategy we used when entering the Texas market in 2005 and the Colorado market in 2008. We’ll start with a small cluster stores, set up regional supervision, and eventually look to open a produce distribution center as part of our Southeast expansion.”

Observers said the company appears poised to grab a much larger share of the market before too long.

Dan O’Neill, managing partner at Marietta, Ga.-based Columbia Properties, said he believes Sprouts already has another three or four Atlanta-area sites lined up for next year.

The Atlanta real-estate blog Tomorrow’s News Today reported that Sprouts has identified three additional locations in the area in Roswell, North Buckhead and Smyrna, although Sprouts has not yet confirmed those locations. Local sources have also noted that Sprouts may be involved in developments in Kennesaw and Decatur, the blog reported.

“They look for a demographic that is a little lower-income than what Whole Foods is looking for,” he said. “Sprouts is looking for middle-income to middle-to-upper-income areas.”

The chain is seeking to open sites in the 22,000- to 28,000-square-foot range, O’Neill noted — about half the size of typical conventional supermarkets. Many of the sites Sprouts has looked at are in power centers where other retailers have closed, he added.

All of Sprouts locations are leased, Sanders told SN.

For Sprouts, which is supplied by wholesaler Nature’s Best, the Atlanta market will be an 800-mile leap from its current easternmost outpost in Overland Park, Kan. — in the Kansas City, Mo., market — another area the chain just entered in January of this year.

Despite the chain’s relatively rapid growth in recent years — it grew by about 13% in store count through the first three quarters of 2013, to 167 locations — Sanders said Sprouts maintains “a pretty disciplined approach when it comes to expansion.”

“We like to build a cluster of stores, and then take a hub-and-spoke approach from there,” he told SN.

In the recent conference call, Sanders said that “organic store growth remains a top priority” at the company.

While the majority of stores the company opened recently have been in existing markets “with the benefit of brand awareness,” he said stores in new markets are performing “at or above expectations.”

Sanders said the company has more than 55 sites approved for the coming years, with 30 leases signed for stores to be opened in 2014 and 2015.

Sprouts isn’t the only natural format expected to enter the Atlanta market this year, however. Asheville, N.C.-based Earth Fare has also been reported to be scouting for sites in the market. It currently operates two of 31 locations in Georgia — one in Athens and another near Augusta.

A spokesman for Earth Fare declined to comment on the company’s plans for the Atlanta market.

The fresh and natural specialists are going up against conventional leaders Kroger Co. and Publix Super Markets, which together command about half the grocery market share in Atlanta, and Walmart, which captures another 20% or so, according to Tucson, Ariz.-based Metro Market Studies.