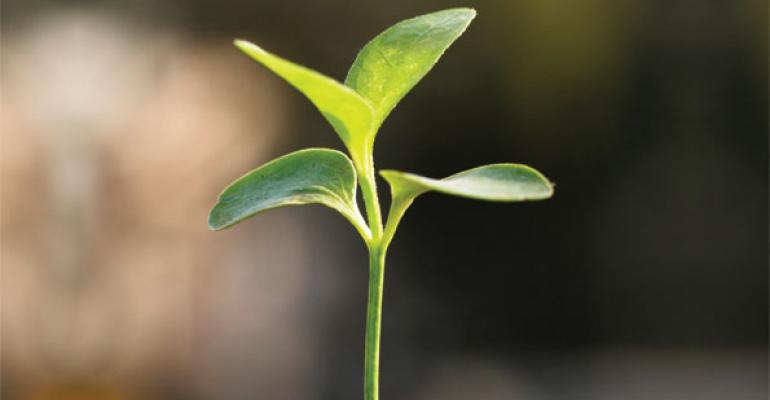 SN Whole Health: Natural Food Chains Are on the Move 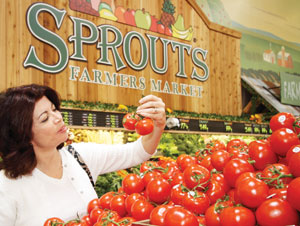 Change is easy to spot when it’s written in large letters on a storefront. That was the case earlier this month when the darkened sign that once distinguished a Borders bookstore in Yorba Linda, Calif., was replaced with the logo for Sprouts Farmers Market. It was the natural food chain’s latest store opening and one of five scheduled for 2012.

The symbolism isn’t lost on the investment community.

“There is more interest in the natural and organic sector, be it retail or manufacturer, than there has been in a long time, both from the standpoint of private and public equity,” noted Scott Van Winkle, an analyst with Canaccord Genuity, Boston. “The stock market will show you that Whole Foods Market, United Natural Foods and Hain Celestial are all sitting at all-time highs.” 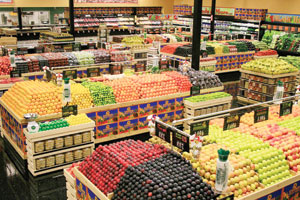 Sprouts-like scenes are playing out in other markets around the country as retailers once dismissed as niche players stretch their market boundaries and make a play at mainstream recognition: Sunflower Farmers Market is shifting from its West Coast focus to open a second store in Oklahoma; The Fresh Market is expanding deeper into the Mid-Atlantic and New England; and Earth Fare is jumping from its base in the Southeast up to Ohio as it prepares to open its fourth store in the state.

All the chains share a focus on health, wellness and fresh foods, and their stores are filled with products and services that consumers increasingly want.

“A huge number of people have become interested in changing the way they eat,” said Andrew Wolf, a retail analyst for BB&T Capital Markets, Richmond, Va. “There’s a societal shift that’s the basis of all this demand.” 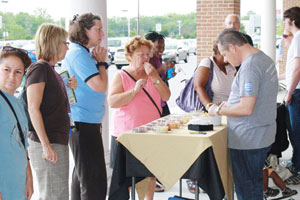 MOM’s Organic Market, Rockville, Md., is an independent chain expanding to meet that demand in the D.C. metro market. The organic food purveyor intends to open two stores in 2012, including its third unit in Virginia. Owner Scott Nash says that his stores are succeeding because other, larger retailers — including Whole Foods and Safeway — haven’t been meeting the needs of core organic shoppers.

“Organic consumers are very dedicated,” Nash noted. “They make sacrifices in other areas of their lives to keep buying organic. It’s a lifestyle, not a luxury.”

No one disputes the hearty appetite shoppers are showing for healthier foods. The overall category for natural and organic foods continues to expand at an impressive rate. But retail growth depends on consumers staying hungry. Fortunately, analysts believe the market is long-term, sustainable and large enough to accommodate any number of new entrants. Not any concept will do, however. A small retailer ideally situated for growth is already established in a home market, has access to adequate capital and promotes a message that assertively positions it as the alternative to mainstream operators like Safeway or Kroger — or even Whole Foods Market. 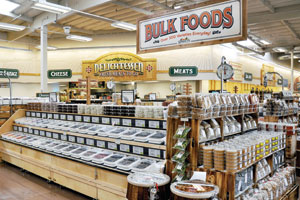 “The segment is leading growth because of aggressive moves by chains like Sprouts and Sunflower, those who have gotten a hold of venture capital money and embarked on an expansion path,” said Jay Jacobowitz, president of Retail Insights. The consulting firm just published its annual Retail Universe report showing that “supernaturals” — the class of stores propelling natural and organic store growth — is made up of 600 units ringing up $13 billion in sales in 2011.

Where is the growth occurring, and which are the hottest markets? Siting stores traditionally depends on extensive research and an in-depth demographic profile; it can be months before the largest supermarket chains decide whether a specific location is good for a new store. The smaller retailers have been able to turn the process on its head.

“It’s all theoretical and gut instinct,” said Nash in talking about his experience opening MOM’s stores. “There’s no science, despite all the demographic studies that get done.” 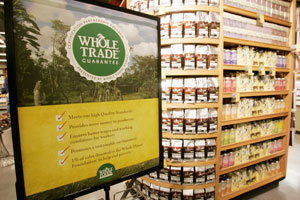 It helps that smaller retailers specializing in natural and organic foods, like MOM’s or Earth Fare, aren’t as tethered to the supply chain as their larger conventional competitors. The emphasis on fresh foods allows them to link with local suppliers for perishables and use just about any regional distributor with an adequate selection for dry grocery and beverages. This ability to adapt to regional or market conditions helps secure them a place at the local consumer’s dinner table.

“That’s the beauty of them. These types of retailers are essentially limited-assortment stores that are focused on select departments, select SKUs, like produce or meat, where they believe they can deliver the best value proposition,” said David Schoeder, principal at The Food Partners, a private equity investment firm in Washington.

As small as the new players are, conventional supermarket operators have taken notice and are rethinking their own strategies. Some have sought their own financing to update stores and expand into new markets. One such company — Heinen’s Fine Foods — is investing more than $10 million to turn an old Staples office supply store into a 38,000-square-foot supermarket in the Chicago suburb of Barrington, Ill. What’s telling is that the new location is an eight-hour drive from the company’s warehouse and commissary in Cleveland, where the independent retailer currently operates 17 stores.

According to co-owner Tom Heinen, it was only recently that the company thought about venturing beyond its home state.

“We have a very slow growth model,” he told the Plain Dealer. “We may not have opened many new stores, but all of our stores have been remodeled, expanded or totally rebuilt.”

In the Pacific Northwest, Haggen unveiled its new “Northwest Fresh” theme last November with a redesigned store near its headquarters in Bellevue, Wash. The Crossroads location was the first of the company’s 28 stores to get the update, and is part of a three-year plan to completely redesign and rebrand all of Haggen and Tops stores, their services and their shopping experiences.

The changes came after the controlling Haggen family sold its majority stake to the Comvest Group, a Florida-based investment firm. Comvest’s unspecified cash infusion is bankrolling the renovations and remodels.

“The Comvest Group’s investment in Haggen will maximize our potential and allow us to strengthen our market share in the highly competitive grocery industry,” said co-owner Don Haggen at the time of the announcement.

Larger chains aren’t sitting out of the action, either. H.E. Butt Grocery Co. is preemptively filling in its home market with smaller stores in more densely populated areas they had skipped over in the past. An H-E-B Central Market, slated to open near Southern Methodist University in Dallas, measures only 33,000 square feet, about half the size of a regular Central Market store. Officials describe the layout as a potential prototype.

“I would estimate that if the right locations were available for a smaller size footprint, I think we could find several more locations in the [Dallas] Metroplex in the primary area,” Stephen Butt, the chain’s senior vice president, told the Fort Worth Star-Telegram.

Others have announced expansion plans outside of their markets. Publix Super Markets, Lakeland, Fla., is moving into the Carolinas, where observers predict a fight with Harris Teeter Supermarkets, another regional mainstream chain that’s based in Matthews, N.C.

Out West, shoppers learned last month that Raley’s Supermarkets, an established and respected chain, would be closing a store very close to its West Sacramento, Calif., headquarters, a victim of increased competition, said the company.

“The biggest challenge has been more than 250 nonunion retail outlets, selling groceries, have opened since 2008 in [our] Northern California and Nevada regions,” said John Segale, a Raley’s spokesman. “Since they’re nonunion, they can sell at a lower price and, with our operating costs, we have a situation where we have to lower costs to be able to compete.”

Sprouts opened its first store in the Roseville section of the city a year ago; Sunflower arrived in the same neighborhood just last month. Both are nonunion retailers.

Whole Foods: Catch Me If You Can 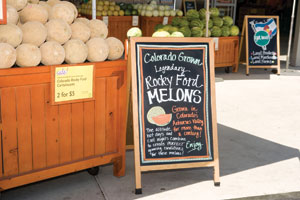 AUSTIN, Texas — Whole Foods Market is still the one to beat.

The nation’s leading natural and organic food retailer receives a lot of criticism for acting more like a conventional retail chain, but its financial performance proves that consumers still love what it sells.

“When you get this large, robust market, and it’s growing three times as fast as the baseline mature market, that’s exciting,” said Andrew Wolf, an analyst for BB&T Capital Markets, Richmond, Va.. “Investors are going to want to get involved, especially when there’s a good bet that demand isn’t being met.”

Some operators take pride in comparing themselves to Whole Foods. Scott Nash, owner of the eight-store MOM’s Organic Market chain in Maryland and Virginia, believes his stores attract core organic consumers who don’t like the direction Whole Foods is taking. 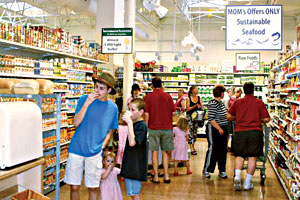 “We have incredibly loyal customers. Our basket average is higher than Whole Foods’ is even though we’re probably one-fourth of their store size,” he said.

As ambitious as Nash sounds, Whole Foods Market is a juggernaut that even the largest mainstream chains are watching. In November, co-CEO John Mackey announced that annual sales had passed the $10 billion mark, and reiterated that the 317-store company sees sufficient market opportunities to achieve its long-term goal of 1,000 U.S. stores. What’s more, those stores are going to be smaller to fit into the communities they serve and better fight the local competition.

2012 is off to a bang-up start with plenty of rumors about mergers, buyouts and acquisitions. It helps that inflation is largely in check, food sales are up and retailers are generally reporting positive numbers. Larger retailers have been nipping off individual units that are on the market, but the big money remains on the small regional chains positioned for growth.

In 2011, private equity brokered 69 of 384 total food-industry deals, an increase of 50% over 2010, according to the Food Institute. Of them all, only two involved supermarkets: The $2.8 billion buyout of BJ’s Wholesale Club by affiliates of Leonard Green & Partners, and the $560 million alliance of Bi-Lo and Winn-Dixie Stores.