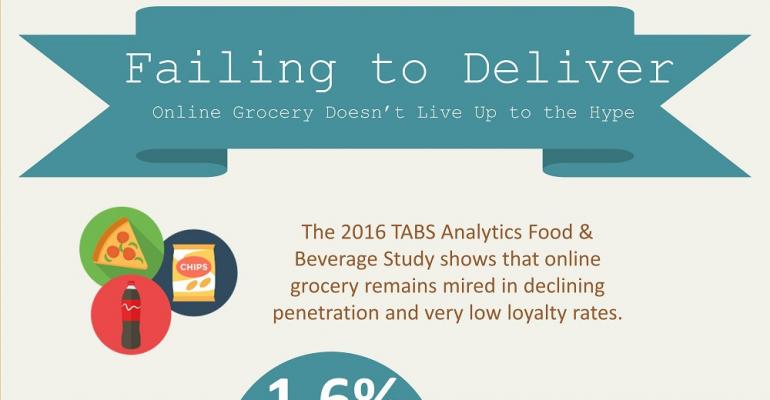 Analyst: Scale back on e-commerce and marketing to Millennials

Now here’s a switch. Food and consumable retailers should dial back investments in e-commerce and their focus on Millennials in favor of stepping up old-fashioned promotional spending at stores and marketing to households with children.

Those were two surprising conclusions of a study on food and beverage buying released Wednesday by Tabs Analytics, Shelton, Conn.

Kurt Jetta, CEO and founder of Tabs, in an interview with SN acknowledged the findings of the study — based on interviews with 1,000 customers — were at odds with prevailing notions that would suggest younger consumers and Internet shopping as prime areas for growth and investment.

But Jetta insisted the data doesn’t support that. Just 20% of Millennials are heavy buyers of food and consumables, the study said. And just 4.5% of all shoppers are using the Internet to buy groceries six or more times a year — a small increase from last year but insignificant as compared to the 78% of shoppers regularly purchasing food and beverages from brick and mortar stores.

“I think people in general have a natural tendency to focus on the future — we’re all aspiring futurists,” he said. “They say Millennials are the future and they like technology and so there’s a natural bias to associate investment with that.”

The study, conducted in August, consisted of 1,000 geographically and demographically dispersed consumers between the ages of 18 to 75 and analyzed 15 consumables categories — carbonated beverages, salty snacks, cereal, yogurt, water, ice cream, cookies, fruit juice, refrigerated juices, crackers, frozen pizza, frozen novelties, candy, popcorn, and sports drinks. It found Internet demand for these products in particular didn’t support the level of investment being made behind them by retailers.

“This study underscores that online grocery is failing,” Jetta said. “For the fourth year in a row, consumers have turned their backs on buying groceries online no matter how much online grocery retailers try to entice them. Sixty-nine percent of consumers never buy groceries online... Food companies and grocers need to figure out why there is such a high level of dissatisfaction with the online channel before they continue to invest any further in it.”

Amazon was the one bright spot in online grocery shopping, with the e-commerce giant realizing a 2% increase in shopper penetration from 14% in 2015 to 16% in 2016, the TABS study found. Amazon was the only online shopping domain to increase shopper penetration in 2016. Walmart.com remained flat in penetration at 12% in both 2015 and 2016, while the grocery banners, overall, dropped from 16% in 2015 to just 11% in 2016, Tabs said.

Brick-and-mortar grocers in the meantime remained stable compared to 2015, the study said, and led other channels of trade with a 26% share among regular shoppers. Online’s share of regular purchasers was up slightly to 1.6%, due in part to an expansion of click-and-collect, Tabs said.

“Even with a significant investment in that ecommerce platform, though, only 1% of Americans say they use the format regularly for grocery shopping,” Jetta said.

Jetta urged retailers and suppliers to focus marketing efforts on households with children over Millennials, noting that the former group are heavy buyers of food and beverages and the latter tends to be more difficult to target with deals.

The study corroborated industry trends of declining transactions in consumables, due primarily to a decrease of heavy buyers. Those audiences are responsive to promotions.

“CPG manufacturers and retailers need to make a significant investment in promotional activity to sustain and grow their businesses. Weaker promotions is directly correlated to weaker sales trends,” said Jetta. “Sustained promotional levels of 15% to 20% of sales are needed to kick-start declining sales trends and bring heavy buyers back.”