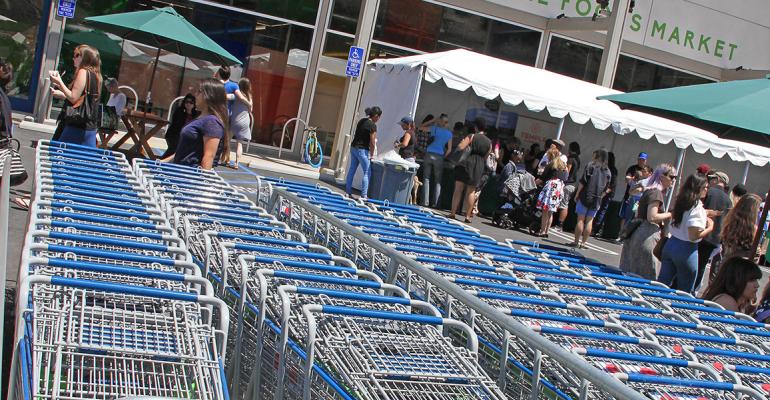 Retail's edgy present — and its mainstream future — are taking shape in a handful of urban neighborhoods across the country where food concepts like Whole Foods' 365 and Ahold's bfresh have taken root, according to a new report.

The report, authored by Garrick Brown, VP of retail research for real estate firm Cushman & Wakefield, presents an index of the 100 top "Cool Streets" — hip retail districts where retailers focused on millennial shoppers and their preferences for frugality and experience are "an incubator of sorts for what will be the hottest new retail concepts of tomorrow."

The report was based on a survey of local real estate agents who ranked neighborhoods based on their current position in the hipness cycle from "edgy/cool" to "gone mainstream" and gave scores based on livability factors such as pedestrian and bicycle friendliness, and retail flavor, including a foodie score.

The report argued that such hip neighborhoods — driven by young people preferring urban living — are different from bohemian enclaves of a previous generation inasmuch as the current cool streets "are now a mainstream aspiration," and as a result, are evolving along the cycle toward the mainstream faster than in the past.

Retail offerings in these spaces tend to be restaurant heavy and "experiential" in nature, such as 365 by Whole Foods, which opened last month in Los Angeles' Silver Lake neighborhood, the report said.

"The Whole Foods 365 concept appears tailor-made for Cool Streets; the stores use a smaller urban footprint ... and require less parking than normal Whole Foods locations," Brown wrote. "Much of its inventory consists of internal brands, so Whole Foods 365's price points are cheaper... This is important because it connects with one of the touchstones of Millennial consumer: frugality. Yet perhaps most interesting of all is the fact that Whole Foods 365 stores will feature ever-changing pop-up retail space in their stores and will consider anything from vinyl record retailers to tattoo parlors as temporary tenants."

Silver Lake was one of 15 Cool Streets highlighted in the report, along with Sunset Park and Williamsburg, Brooklyn; Logan Square in Chicago; Over-the-Rhine in Cincinnati; River North in Denver; Wynwood in Miami; the North Loop in Minneapolis; Roosevelt Row in Phoenix; Carytown in Richmond, Va.; East Village in San Diego; Jackson Square in San Francisco; the Delmar Loop in St. Louis; Queen West in Toronto; Mount Pleasant in Vancouver, British Columbia; and Shaw in Washington, D.C.

An appendix of 100 top Cool Streets also includes the Boston neighborhoods of Allston and Davis Square where Ahold opened its first bfresh store and has plans for another, respectively.

The Millennial embrace of experience is visible as restaurants outnumber retail businesses in such neighborhoods by 2-to-1, the report noted.

"Cool Street neighborhoods are pretty democratic when it comes to food; from food trucks gone bricks-and-mortar to fast casual chains and the highest-end chef driven concepts, growth has come from all directions," Brown wrote. "While this reflects the trend of growth taking place throughout the entire retail world, it is yet another trend largely driven by the Millennial consumer."