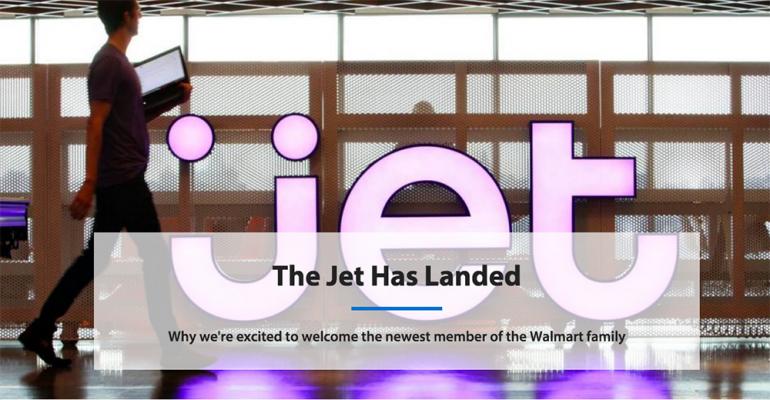 The marriage of Wal-Mart Stores and Jet.com represents an opportunity to establish the biggest — and arguably the first — truly price-focused brand in the virtual shopping world, observers said.

“If they can properly integrate, I think they have the ability to own a low-price position online that’s currently owned by no one,” Bill Bishop, chief architect of Brick Meets Click, a Barrington, Ill.-based consultant, told SN in an interview Thursday.

While e-tailing giant Amazon.com is considered an online price leader today, “the reality is they’re a little bit all over the place in pricing,” Bishop said.

Bentonville, Ark.-based Walmart completed its $3.3 billion acquisition of Jet earlier this week. As previously reported, the deal brings together fast-growing and well-funded Jet.com — which in just over a year zoomed to an estimated $1 billion in annual sales on a hot brand and “dynamic pricing” model — with Walmart, which has a considerably less sexy url, but one with ambitions to build an e-commerce brand as mighty as its store fleet.

What both have in common is a reputation for price central to their brands in a way that most other competitors in the e-commerce field do not, Bishop explained. This, he said, holds the promise of distinguishing its offering, particularly in areas like grocery where shoppers can be particularly price sensitive.

Walmart said it would appoint Jet founder Marc Lore to head up its combined e-commerce operations, replacing Neil Ashe. It is expected that Lore will bring Jet’s technical expertise in dynamic pricing — which rewards shoppers with lower prices for saving Jet the costs associated with virtual retailing such as volume discounts, shipping discounts and even payment method discounts — to Walmart.

“Walmart bought three things with Jet,” said Neil Stern, senior partner with McMillanDoolittle, told SN. “They bought talent. They bought an algorithm. And they got Jet itself, a different brand with a slightly different shopper base. I think they feel that will help broaden their appeal.”

In a blog post published earlier this week, Walmart CEO Doug McMillon characterized the shopper bases as “complementary.” “Jet.com is a hit among urban Millennials, and it will continue to focus on delivering premium brands and experiences,” he said. “Walmart.com is winning value-conscious shoppers with everyday low prices by keeping costs low.”