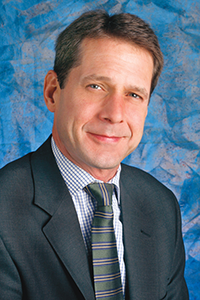 Veteran journalist Robert Vosburgh passed away unexpectedly on July 15 at the age of 54.

Vosburgh covered the foodservice and food industry for 25 years, including 15 years at Supermarket News, serving as group editor and fresh food editor.

"Bob was not only a terrific journalist and colleague who will be missed by all who were lucky enough to work with him — he was a good friend," said Don Cuppett, Supermarket News copy chief and production manager.

“Everything Bob did was polished and smart and somehow funny at the same time. He taught me that business news can be both entertaining and informative,” said Jenna Telesca, editorial director of Supermarket News.

During Vosburgh’s time at Supermarket News, he launched the Whole Health quarterly magazine about natural foods. Under his leadership the publication went on to win multiple journalism awards, including two Tabbie awards for cover design and a national award for editorial excellence from the American Society of Business Publication Editors.

“Bob Vosburgh’s creative meetings for Penton’s ’Whole Health’ quarterly were refreshing in that they were actually creative,” said Jim Haines, designer and former art director of Supermarket News. “Bob always attacked the coming issue with a ‘what-new-can-we-do’ spirit as opposed to ‘what-did-we-do-last-year.’ No design idea was too outrageous or silly.”

Vosburgh served as a mentor and colleague to journalists across the food retail industry.

“Walking show floors with Bob took forever because everyone loved him and every few booths he'd be greeted like a long lost relative,” said Julie Gallagher, managing editor at the Specialty Food Association.

Vosburgh took a multi-platform approach to his journalism, working as an on-air reporter and radio correspondent and moving to video, writing and editing throughout the rest of his career.

“It didn’t matter which content medium he was using. He was just as comfortable writing a highly insightful article or blog post as he was spearheading a powerful video segment. Those who knew Bob always enjoyed his ability to bring perception and wit to everything he did.”

Most recently, Vosburgh served as news director of the New York-based Private Label Manufacturers Association. There, he oversaw the organization’s video content, including a series of videos looking at private label categories.

“Bob’s insight and experience will be impossible to replace. He understood the industry and the subtle and not-so-subtle ways in which it operates. He was a reporter’s reporter and that is the highest praise journalism offers,” said PLMA president Brian Sharoff.

Vosburgh is survived by his partner Kai Ding.

The viewing and memorial will be held on Saturday, July 20, from 11am to 1pm at the Cody White Funeral Service, 107 Broad St., Milford, Conn.