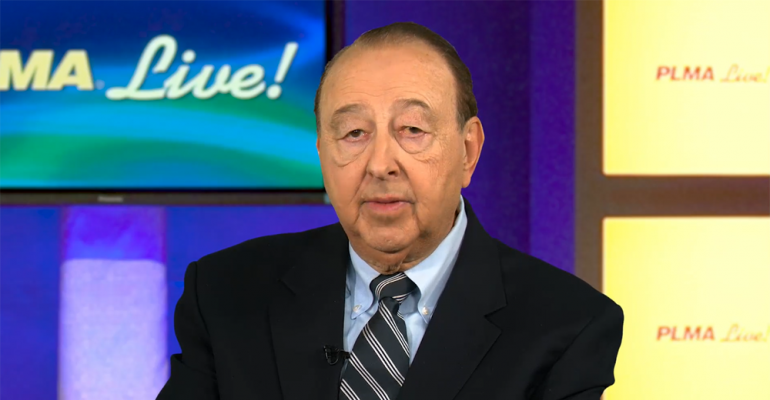 PLMA
Brian Sharoff became president of the Private Label Manufacturers Association in 1981, shortly after the association was founded.
News

Brian Sharoff, president of the Private Label Manufacturers Association, passed away on Saturday, May 23.

“Today is a sad day for the entire PLMA family,” Lisa Manzoline, director of sales for Reynolds Consumer Products and chairman of the PLMA board of directors, said in a statement. “Under Brian Sharoff’s tremendous focus and dedication, the Private Label Manufacturers Association has grown to become a vital and essential resource for suppliers and retailers around the globe. Brian’s leadership will be greatly missed.”

Sharoff became PLMA’s president in 1981, shortly after the association was founded. During his tenure, the association’s membership expanded from 200 manufacturers, suppliers and brokers in the United States to more than 4,400 companies worldwide.

Before coming to PLMA, Sharoff served five years as executive vice president of the Metropolitan New York Retail Merchants Association. Prior to that, he served three terms as a member of the New York State legislature. He also held teaching positions at St. Joseph’s University, Rutgers University and The New School of Social Research.

The PLMA trade show held every November at the Rosemont Convention Center in Chicago draws the largest concentration of private-label buyers in the U.S. Key executives from supermarkets, drug chains, mass merchandisers and other retailers come to find suppliers and new products. In addition, PLMA’s annual “World of Private Label” International Trade Show, held each May at the RAI Exhibition Centre in Amsterdam, has grown to more than 4,500 stands and now represents manufacturers from nearly 75 countries. The show attracts buyers from across Europe, Asia, Africa, and the Middle East.

In a podcast interview with Supermarket News last November at the 2019 PLMA Trade Show in Chicago, Sharoff discussed the strong growth of store brands in the mass retail channel.

“Retailers are now less dependent on national brands for new products, research, marketing push, television advertising, etc. So the things that helped make national brands strong for 20 to 30 years are no longer factors in the marketplace,” Sharoff said.

“Retailers who want to do [private label] now have a clear-cut path in terms of packaging, product concept, ingredients, etc.,” he added. “So they’re in a better position to be able to provide products that consumers are looking for. The result is that you’re going to have growth in private label and a lack of growth in national brands.”