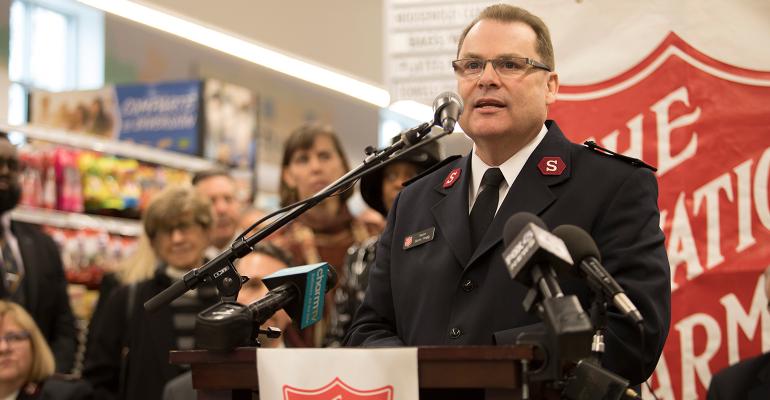 The Salvation Army yesterday extended its long tradition of helping underprivileged communities as the charity organization celebrated the grand opening of its first grocery store in an underserved neighborhood of Baltimore.

The Salvation Army’s DMG Foods is a non-profit grocery store located in a 7,000-square-foot warehouse in northeast Baltimore, designed to provide healthy and affordable food for all members of the community. (The name DMG comes from The Salvation Army’s mission of “doing the most good.”) According to the organization, DMG Foods is the first grocery store in the nation to combine social service with a traditional grocery shopping experience. The social services that will be available at DMG Foods will include nutritional guidance, shopping education, workforce development and meal planning. According to Major Gene A. Hogg, The Salvation Army of Central Maryland area commander, the idea for a grocery store came about after the Baltimore protests in April 2015 left many local convenience stores looted or closed.

“The Salvation Army distributed food baskets throughout the city,” said Hogg, “and soon found that it was not sustainable. This outreach made us question if people within the community had access to sufficient resources and how we could further support them. After many weeks of deliberation, we researched more efficient ways to support Baltimore City’s food initiative: thus, the concept of DMG Foods. We chose to open a grocery store, because we felt it was important that city residents had a broader food selection and more buying power.”

DMG customers will have access to perishable and non-perishable departments, including a bakery, dairy, butcher shop, deli and fresh produce. “Shoppers can expect to see national brands such as Kellogg’s, Del Monte, McCormick, Kraft, Utz and more,” said Hogg, adding that the store will also offer its Best Yet private label brand in a variety of product categories.

The store’s location in what is considered an urban “food desert” without much access to fresh meats and produce or a wide grocery selection is key to its mission. “DMG Foods was designed to provide affordable groceries for all consumers,” said Hogg. “However, customers that self-identify as government assistance recipients, via online or kiosk registration, will receive a specific rewards card ID that will enable them to obtain complimentary food items, once a month.” DMG Foods offers a deli, bakery, fresh produce and many other food departments.

More than a grocery store, The Salvation Army is positioning DMG Foods “as a community market with an educational component. Our grocery will provide great savings, nutritional guidance, meal planning and workforce development for the community.” To those points, DMG Foods will offer a program that teaches local residents retail soft skills and provides hands-on grocery apprenticeship and, through a partnership with the Maryland Food Bank, offer daily meal solutions and cooking demonstrations for DMG’s customers.

“The incentive is to promote the cost effectiveness of cooking at home. We want to encourage the community to prepare and eat meals with their families, instead of buying prepared foods,” said Hogg.

“We hope that DMG Foods will be the prototype for more stores in Baltimore and other areas throughout the southern territory.”