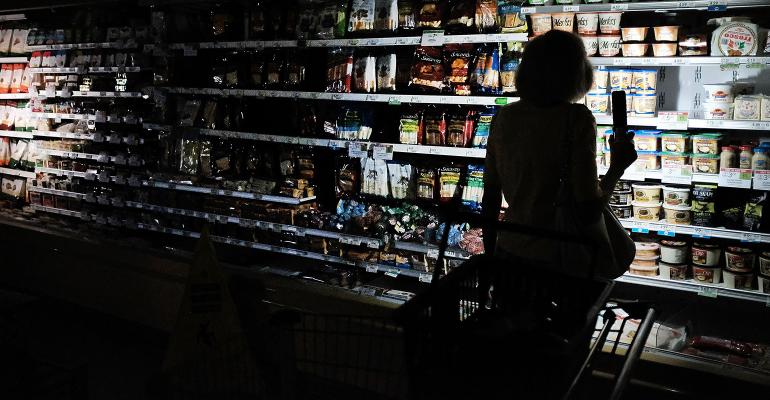 Spencer Platt/staff/Getty Images News
A woman shops in one of the few supermarkets open with limited electricity three days after Hurricane Irma swept through the Naples, Fla., area in September.
News

Viewpoint: Supermarkets: The pillars of communities

When communities experience natural disasters, supermarket step up to the plate to offer assistance

The events of the past few months illustrate the devastating impact natural disasters can have on a society. First, it was Hurricane Harvey, bringing unprecedented rainfall and destructive flooding to east Texas. Less than a month later, Hurricane Irma wreaked havoc on Florida and the Southeast. And shortly after Irma touched down, Hurricane Maria devastated several Caribbean islands, including Puerto Rico and the Dominican Republic.

It’s times like these that create anguish in the human psyche, let alone the toll on families and finances.

But through tough times comes caring and compassion. Neighbor helping neighbor. Stranger helping stranger. And when communities experienced the full blow of these three deadly hurricanes, supermarkets—the pillars of the community—stepped up to the plate to offer assistance.

In Texas, H-E-B donated $100,000 toward hurricane relief efforts and accepted customer donations through its statewide tear pad campaign. Additionally, it mobilized its Emergency Response Team and Mobile Kitchens and Disaster Relief Units to deliver much-needed relief supplies and services, as well as prepare and serve hot meals, to individuals and communities in affected areas.

Across the Gulf in Florida, Publix turned to its in-store bakeries to help uplift the spirits of the state’s hurricane-tested residents. Cake designers at the chain created Hurricane Irma-themed cakes in the days leading up to the storm’s arrival, some with messages like “Go Away Irma” and “Weather it Out,” in a show of solidarity to its customers. While the cakes drew some negative comments on social media, a majority of social media users responded positively, viewing the effort as a way to bring Florida residents together and generate a few smiles at the same time.

The Albertsons Cos.—through the generous donations of customers and employees—raised more than $8 million through its point-of-sale campaign at over 2,300 of its stores.

Regional as well as national chains like Walmart and Target—as part of the community as traditional retailers—also stepped up to the plate with monetary and material donations; Walmart committed to $10 million in hurricane relied in 2017, while Target has pledged over $4.5 million in aid. Publix Charities donated $250,000 to the American Red Cross for relief efforts in areas impacted by Hurricane Harvey; H-E-B returned the favor for Florida, delivering 10 truckloads of food, water and hygiene products to the state.

Additionally, numerous regional and international chains—several of which do not even operate within the impacted area—also contributed, including ShopRite ($100,000), Aldi ($150,000), Schnucks ($61,000 through its Scan & Give program) and Kroger ($25,000). This list is just a snapshot, as retailers nationwide assisted in the hurricane relief efforts; in total, one-half of the top 50 supermarket retailers supported the cause in some capacity.

As these crises have demonstrated, supermarkets are much, much more than just businesses operating in a community. They are an active part of the community, whether it’s through a food drive, sponsoring a youth sports league, providing career opportunities for residents or assisting those in need during a natural disaster. As online grocery shopping captures the headlines in today’s changing food retail landscape, traditional supermarkets continue to make a positive impact on their communities, as they’ve always done. And while natural disasters always bring communities together, it’s important for retailers to continue and expand their involvement in the communities they serve throughout the year.

What role do your stores play in the community?

How have your stores helped others in times of need?

Mike Eardley is the president and CEO of the International Dairy Deli Bakery Association.