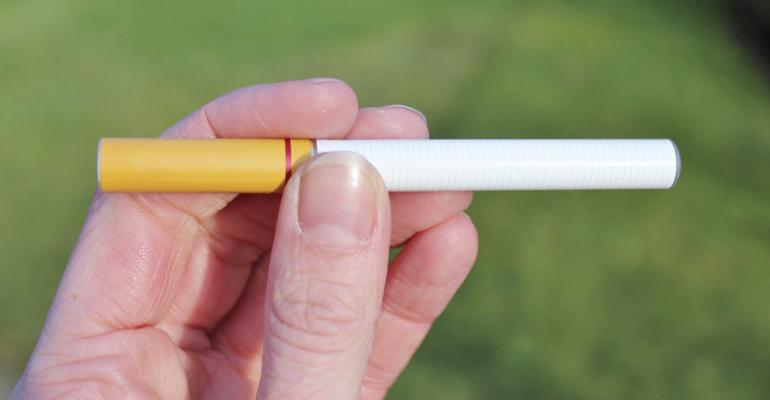 Electronic cigarettes are under scrutiny, as more states prohibit sales to minors, local governments ban their use in public places and the FDA considers regulatory action.

Electronic cigarettes, also known as e-cigarettes, are battery-operated products that heat an element, often one containing nicotine, into a vapor that is inhaled by the user. Increasingly popular among those seeking to stop smoking, e-cigarettes generated $180.2 million in multi-outlet dollar sales for the 52 weeks ending January 26, 2014, a whopping 77% increase from the same period in 2013, according to IRI.

While e-cigarette supporters say that the devices are far less harmful than traditional cigarettes, the FDA says further research is needed to assess the potential public health benefits and risks of the devices, according to FDA spokeswoman Jenny Haliski.

The FDA intends to propose a regulation soon that would extend the agency’s “tobacco product” authorities -- which currently only apply to cigarettes, cigarette tobacco, roll-your-own tobacco, and smokeless tobacco — to other categories of tobacco products that meet the statutory definition of tobacco product, according to Haliski.

Until then, there’s a hodgepodge of different rules and regulations at the state and local levels. Over the last year, an increasing number of states have adopted minimum-age laws for e-cigarettes. About 30 states prohibit the sale of e-cigarettes to anyone under 18, or, in the case of four states (Alabama, Alaska, Utah and New Jersey), age 19.

Local governments are also clamping down on where e-cigarettes can be used. Among other actions, New York City, Chicago, Los Angeles and, most recently, San Francisco, have banned the use of e-cigarettes in restaurants and certain other public places.

Some states are even seeking e-cigarette tax policies.

Due to the many new regulations, We Card — a non-profit organization that provides training to retailers to prevent tobacco and other age-restricted product sales to minors — has created new retail signage that alerts the public that e-cigarettes will not be sold to minors.

The signs will be available beginning next month in two forms: one for states where the minimum age is 18; another for those with an age restriction of 19.

While wording for e-cigarette laws vary depending on the state, typically if a state has any type of e-cigarette age-restriction in place, retailers will apply it toward all types of e-cigarettes, whether or not they contain nicotine. Even non-nicotine versions are a concern, as public health experts fear they may act as a gateway to traditional smoking, and question the long-term effects of the chemicals in the cartridges.

Just this month, the National Association of Convenience Stores, Alexandria, Va., issued new guidelines to its members recommending that they prohibit e-cigarette sales to minors.

Convenience stores are the largest retail channel for e-cigarette sales, with overall sales of nearly $540 million in 2013, representing 75% of all brick-and mortar sales, excluding kiosks and tobacco only outlets, according to NACS.

“Given the uncertain status of e-cigarettes, it just makes sense that convenience stores check IDs as part of the more than 4.5 million age-verification checks that we already conduct every day,” NACS president and chief executive officer Henry Armour said in a statement.

NACS encourages retailers to use procedures and training tools like those offered by We Card.

The Smoke Free Alternatives Trade Association, which represents the personal electronic vaporizer, vape and e-liquid industry, supports laws preventing e-cigarette sales to minors, according to Phil Daman chairman and president SFATA and an attorney at the law firm of Daman & Associates.

However, laws that treat e-cigarettes as tobacco are inappropriate because they are a completely different product, he said.

“While we don’t agree that these products should be controlled under the Tobacco Control Act, which is designed to focus on the harms caused by tobacco companies, we continue to work to help government officials understand the technology so that there can be appropriate regulations,” said Daman.