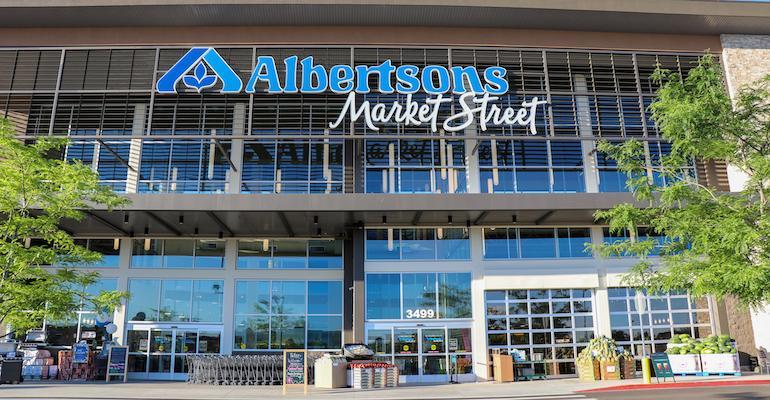 Albertsons
Albertsons said it plans to discontinue use of its own home delivery truck fleet in 10 states starting on Feb. 27, which will result in the layoff of delivery workers.
News>Online Retail

Home delivery fleet to be discontinued next month, resulting in driver layoffs

Albertsons Cos. is ceasing its own online grocery delivery operation in a portion of its market areas and shifting exclusively to third-party delivery service providers.

Confirming news reports this week, Albertsons said it plans to discontinue use of its own home delivery truck fleet in 10 states starting on Feb. 27, which will result in the layoff of delivery workers. The company didn’t specify the number of workers affected but said it “made the strategic decision” in early December to end its own online grocery delivery in those areas.

“Our HR teams are working to place all impacted associates in stores, plants and distribution centers. We will transition that portion of our e-commerce operations to third-party logistics providers who specialize in that service. While we know that this move will help us create a more efficient operation, it wasn’t a decision we made lightly or without a great deal of consideration,” Albertsons said in an email statement yesterday.

While changing consumer behavior during the COVID-19 crisis has triggered a boom in e-commerce sales across the supermarket industry, online grocery profitability has remained challenging for most companies.

“This decision will allow us to compete in the growing home delivery market more effectively,” Boise, Idaho-based Albertsons noted. “Since the COVID-19 outbreak, our e-commerce business has risen to new heights and has become more strategically important to Albertsons Cos. Our goal is to truly make e-commerce a competitive advantage.”

Albertsons has been expanding online grocery delivery across its retail banners and, as of the end of August, home delivery was available in 90% of stores via Instacart and Albertsons’ own delivery service, with the latter offered at roughly 65% of stores. Albertsons Cos. store banners also work with DoorDash, Shipt and Uber Eats for grocery and/or food delivery service.

Since the start of the pandemic, Albertsons has seen digital sales skyrocket, jumping 243% in its fiscal 2020 second quarter ended in September following a 276% gain in the first quarter. That growth also has fueled expansion of the retailer’s Drive Up & Go pickup service. Albertsons now has around 1,400 curbside pickup sites and aims to reach 1,800 by the end of fiscal 2021.

Albertsons said its company divisions plan to offer jobs to each impacted delivery associate but added that it’s “too soon to speculate how many associates will ultimately accept positions.”

“All associates who stay in their current roles through the end of this transition but choose to leave may be eligible to receive severance benefits according to the company’s plan. We will work with them on their individual situation,” Albertsons stated. “We are also offering an incentive bonuses to associates in those positions who stay through Feb. 27.”

Although published reports said Albertsons was making the delivery service change in the wake of California’s passage of Proposition 22 in November, the transition already was being considered by the company. Proposition 22 classifies “gig economy” app-based transportation and delivery drivers — such as for Uber, Lyft, DoorDash and Instacart — as independent contractors rather than as employees, which would entitle them to full benefits as well as labor protections such as minimum wage, overtime and sick leave.

United Food and Commercial Workers International (UFCW) chided Albertsons in response to reports that the retailer plans to lay off grocery delivery drivers at its Vons and Pavilions stores in California.

“All across California, Vons and Pavilions grocery workers have been bravely serving on the frontlines since the pandemic began, putting their own health at risk to ensure Californians have the food they need during this crisis. Now, with COVID-19 outbreaks spiraling out of control and overwhelming hospitals across California, it is stunning that Albertsons would fire these courageous and hard-working men and women keeping our food supply secure,” UFCW International President Marc Perrone said in a statement.

“For seniors, high-risk individuals, and countless more who are quarantining, Vons and Pavilions grocery delivery drivers have been a trusted and crucial lifeline, providing access to food for some of the most vulnerable Californians,” Perrone said. “Exploiting the passage of Prop. 22 to destroy the good-paying jobs of these dedicated frontline workers, in the middle of this public health crisis, is simply wrong. As the union for grocery workers across California, UFCW is calling on Albertsons to immediately halt these plans and to put the health of their customers first by protecting the jobs of these brave essential workers at a time when our communities need them most.”