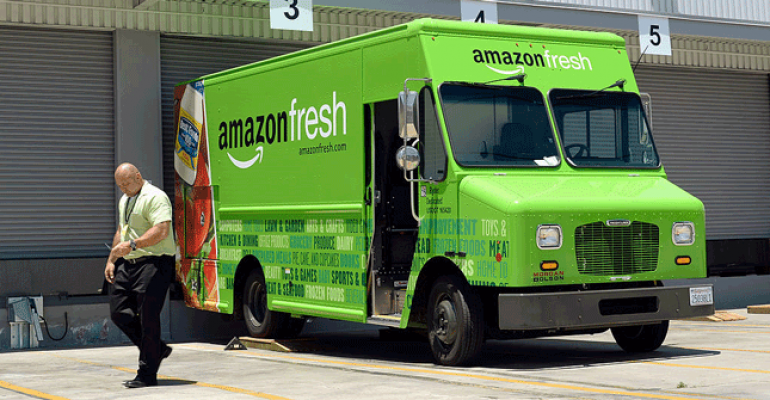 A new report on Amazon’s grocery performance sheds light on the composition of the company’s perishables sales as well as its rapid growth in certain CPG categories.

Produce and refrigerated dairy products topped the list of the best-selling categories at Amazon Fresh in the first quarter, as expanded inventories helped boost sales to an estimated $10 million, according to Salt Lake City-based research from One Click Retail.

“Amazon Fresh is definitely picking up speed,” said Nathan Rigby, VP of sales and marketing at One Click Retail.

Sales data for perishables from previous quarters is not available, but the data from the first quarter help illustrate Amazon’s commitment to the grocery category, he said.

“It does represent how important the classic grocery staples of produce and dairy are to any grocery platform,” said Rigby, who authored the report.

One Click Retail estimated that Amazon’s total grocery sales in the quarter totaled $350 million, up 30% year-over-year, driven in part by the growing adoption of Amazon Prime. (One Click Retail’s calculations do not include nonfood consumables, which the firm reports separately.)

That growth outpaced the grocery industry as a whole by a ratio of 15-to-1, the report concludes.

After produce and refrigerated dairy, the top-selling categories at Amazon Fresh in the first quarter, in order, were bakery, other refrigerated items, frozen novelties, floral and garden, frozen meals, frozen breakfast foods, frozen vegetables and fruits and frozen desserts.

In addition to expanding its perishable inventories, other key drivers for the growth of Amazon’s perishables sales, the reported concluded, have included the company’s efforts to improve its delivery times and to offer more fulfillment options. Last month the company unveiled two Amazon Pickup locations in Seattle where consumers can collect their online grocery orders.

Rigby expects Amazon to continue its efforts at making the click-and-collect model work and to roll out other experiments to drive the success of Amazon Fresh and its grocery offering overall.

“They are a tech company at heart, and they understand that no individual idea is always going to win the day,” he said. “You have to have multiple ideas going on at the same time.”

Membership growth in the Amazon Prime service has also been a key driver of grocery sales increases, the report concludes. More than half of Amazon Prime members have bought groceries through the service.

In addition to Amazon Prime membership, other key growth drivers for Amazon sales include use of the site among men age 18-44, the report notes. The majority of men in this age group have purchased groceries online, and the bulk of consumers who have done so are satisfied with the experience and plan to do so again, the report said.

The addition of alcoholic beverage items to Amazon’s offerings in some markets has also had a marked impact on sales. Sales of wine, the No. 5 category overall in Amazon grocery sales in the first quarter, rose 115%.

Among individual products, as opposed to categories, single-serve coffee pods took the top two spots on Amazon in the first quarter in the U.S., followed by a plant-based protein powder, a bottled water product and organic coconut oil.

The growth of Amazon will require CPG manufacturers to rethink their go-to-market strategies and to evolve their data-driven decision-making, said Rigby.

Emphasizing points of differentiation will be key to the success of traditional supermarket operators, he added.

“For supermarkets, it’s doubling down on what you’re good at,” said Rigby. “What can Amazon not do? What solutions do you have that they can’t provide? Instead of trying to be more like Amazon, it’s really about finding out what consumers care about for you.”