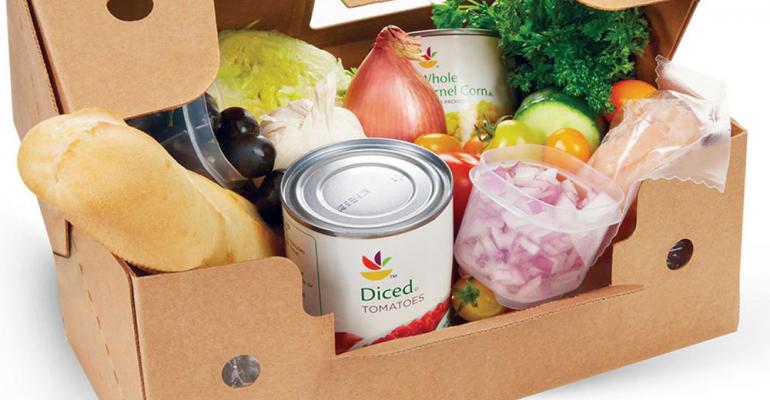 The Seattle-based, digital giant has claimed the word mark, “We do the prep. You be the chef,” according to the U.S. Patent and Trademark Office records. The phrase will be used to market “prepared food kits composed of meat, poultry, fish, seafood, fruit and/or and vegetables.”

Traditional grocers have already tapped into the meal-kit trend, opting to swim with the rising tide rather than against it. Between March of 2016 and March of this year, domestic grocery stores sold about $81 million worth of prepped meals.

Kroger and Publix and are among several retailers offering prepped meals at physical locations. Prior to being acquired by Amazon, Whole Foods had already dipped its toes in the water via a partnership with Salted at select stores.

But the flexibility and desire to innovate may not be enough to boost traditional grocers that will now compete with a legendary disruptor.

Cooper Smith, director of Amazon research at L2, pointed to the company’s reputation for out leveraging established “legacy retailers” in other sectors by generating customer loyalty via “low prices, convenience and selection.”

“Meal kits fall squarely into the ‘convenience’ bucket, as does grocery delivery,” said Smith, who added that shopping for food items at a physical store is viewed as a “huge pain” for a significant portion of American shoppers.

“The net-net here is that Amazon is going all in on groceries,” he said. “Amazon has won many battles over the past two decades, conquering books, electronics and, more recently, apparel, but the war of retail will be won in groceries over the next five to 10 years.”

Brick-and-mortar grocers aren’t the only entities in the cross hairs.

“Amazon's meal kit delivery service poses a major threat to Blue Apron,” Smith added. “This is a relatively small market at $4 billion, and a total addressable market of $36 billion annually by 2026, so there isn't a lot of money to go around for different providers,” he continued, adding that the total US grocery market currently stands at $750 billion per year.

“The target customer who uses a meal kit delivery service is a busy, affluent consumer. The Blue Apron customer is also a Prime member, so the meal kit business is relatively low hanging fruit for Amazon,” he said.

By the close of business on Monday, the fruit may be hanging even lower. Blue Apron’s stock reacted very poorly to the news of Amazon’s new venture, sliding as much as 12% according to Bloomberg.

It’s salt in the wound after the brand that is arguably synonymous with the prepped-meal movement severely underwhelmed investors during its late June IPO.