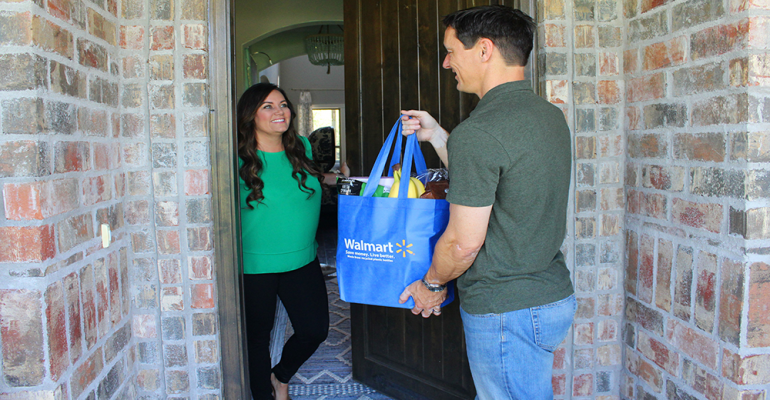 Walmart’s heavy investment in e-commerce is paying off, and the retail giant could top Amazon in online grocery market share by the end of this year, according to a report this week by Deutsche Bank Securities.

“Given the pace of disruption in the food retail landscape and our framework that the top players will reap the benefits of industry consolidation and increasing adoption of online grocery, we believe Walmart is best-positioned to continue to take both mind and market share going forward,” Deutsche Bank analyst Paul Trussell said in a research note on Walmart titled “Flexing Its Muscles.”

In recent years, Bentonville, Ark.-based Walmart has quickly shifted gears in refocusing its growth strategy from brick-and-mortar to e-commerce. Challenging Amazon and big supermarket chains, Walmart aims to bring online grocery delivery to 100 metropolitan areas — covering 40% of U.S. households — by the end of 2018 through its own services and third-party providers.

“The retailer is reaping returns on the many years of investment in e-commerce and customer service, and we believe the company is now in position to accelerate market share gains in grocery while also growing EBIT dollars (excluding Flipkart) and expanding ROI,” Trussell wrote in the report. “Our view is supported by our thesis that the food retail landscape is rapidly changing due to high adoption rates of convenience/online grocery, and market share is meaningfully bubbling to the top.”

Walmart reported that, as of late September, it offered online grocery delivery service in over 50 markets and more than 2,000 grocery pickup locations. By its fiscal year close at the end of January, the company projects that it will have 2,140 grocery pickup sites in 430 markets, covering 69% of U.S. households.

“Management has previously stated that 30% of the users of the service are new customers to Walmart,” Trussell noted.

“Walmart is the second-largest online grocery player in the U.S., which we estimate accounted for 11% of the market in 2017 and, importantly, we believe the retailer could surpass Amazon by end of 2018 as it rolls out an incremental 1,000 pickup locations,” Trussell said in the research note. “Further, we believe Walmart could reach 17% online grocery market share by 2025.”

Walmart holds its annual analysts meeting next week, and Deutsche Bank expects a bullish outlook from the retailer’s management.

“We believe management will reiterate the 40% growth for the U.S. online business for the current year, with a target of 30% in fiscal year 2019,” Trussell wrote.

Walmart’s e-commerce sales growth continues to rise, from 33% in the first quarter to 40% in the second quarter, and Deutsche Bank forecasts that the company will reach its target of 40% for the full 2018 fiscal year, he noted.

“We believe Walmart has positive momentum with robust underlying trends in the core business, and an expanding online platform (including both Walmart.com and Jet.com) that positions the company as a legitimate contender against Amazon in the long-term,” Trussell said in the report. “While e-commerce is still a relatively small portion of the business, Walmart was quick to focus its efforts there, which we believe will set the retailer up for success in the future.”