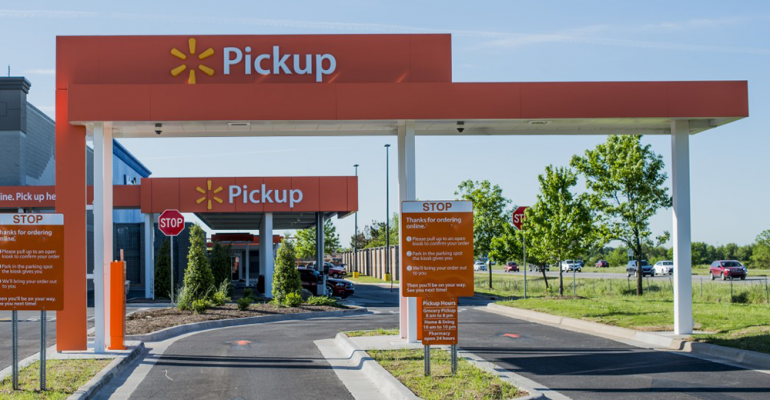 Amazon’s e-commerce lead is shrinking as major brick-and-mortar retailers win over more U.S. online customers for groceries and other consumer packaged goods (CPG), according to Nielsen.

Over the past two years, Walmart, Kroger and Target — along with e-grocery enabler Instacart — have far outpaced Amazon in percentage growth of online CPG purchasers, Nielsen/Rakuten Intelligence e-commerce data shows. 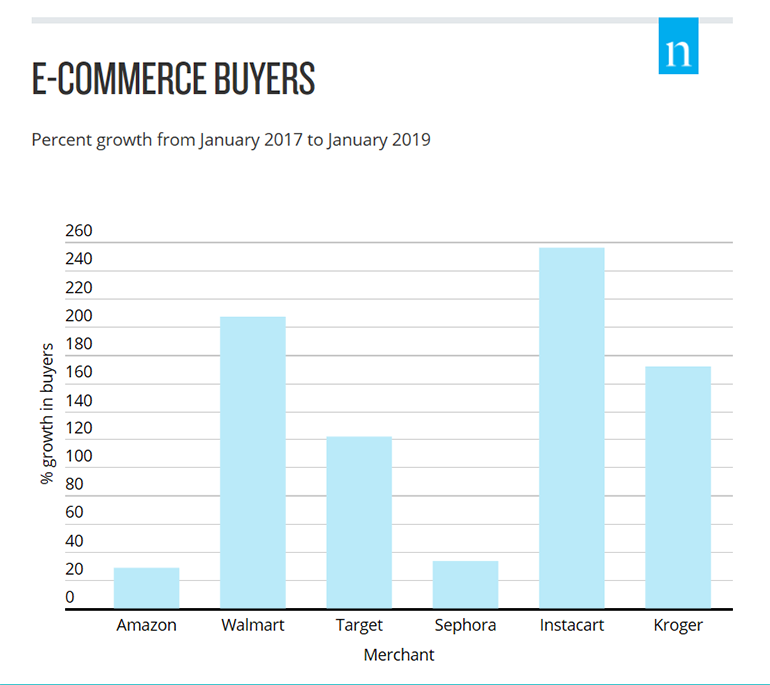 Between January 2017 and January 2019, the number of e-commerce buyers of grocery and other CPG products for Amazon rose 29%, compared with 207% for Walmart, 172% for Kroger and 122% for Target, Nielsen reported. Growth was even faster for Instacart during that time frame, soaring 256%.

“New Nielsen e-commerce data, powered by Rakuten Intelligence, shows that Amazon’s dominance in digital retail — specifically for CPG products — is slipping. In fact, over the past two years, established brick-and-mortar stores have taken share back and closed the competitive gap,” Nielsen said.

How have brick-and-mortar players closed that gap? Retail giants like Walmart, Kroger and Target “turned strategy into reality” by rapidly ramping up their online grocery fulfillment capabilities, not just for home delivery but also for store pickup, according to Nielsen.

The consumer market researcher estimated that the click-and-collect share of all CPG e-commerce sales climbed from 4% to 11% during the past two years. And the grocery/gourmet food category has seen nearly a 50% compound annual growth rate over the past three years.

“These merchants have succeeded, in part, because they’ve embraced the click-and-carry model, where consumers buy an item online and pick it up at a physical store,” according to Nielsen. “Consumers like this model because it gives them the confidence to expand their online shopping beyond health and beauty.”

Amazon still holds a big lead, however. Though Walmart, Kroger and Target each have expanded their base of online customers by at least 90% more than Amazon over the last two years, Amazon’s reach among U.S. online purchasers remains 10 times more than any of those retailers, Nielsen noted.

“The race to master omnichannel retail within the U.S. grocery/CPG space is on. With Walmart’s successful push toward online migration, the rapid rise of grocery delivery players like Instacart, complemented by Amazon’s foray into physical stores, the stage has been set for a battle royale,” Nielsen observed. “And it’s really anyone’s game to win.”

All CPG online retail players will face hurdles. In the past two years, 29 million people started shopping for CPG products online, but only two-thirds of all e-commerce shoppers actually make CPG purchases.

Food quality is the chief obstacle. According to the Nielsen/Rakuten data, 76% of e-commerce consumers cite food quality as a deterrent to buying CPG products online. Other barriers to online CPG purchases included cost/fees (42%), don’t trust the process (32%), not as fun as in-store (30%) and takes too long (27%).

The online market potential for grocery/CPG remains high, Nielsen added. Online CPG sales have surged 30% year over year, and 60% of consumers have browsed and ordered CPG items online. Also, 28% of shoppers have made online CPG purchases several times a month.