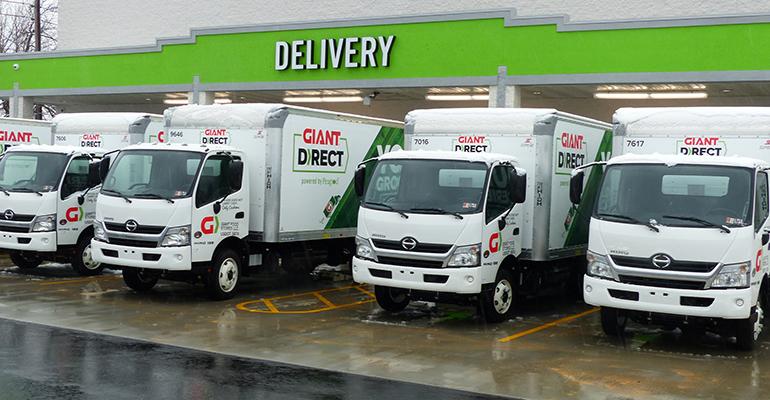 Digital Top 10: Online grocery gets up to speed

The race to get going in online grocery is shifting into a drive to get bigger, faster and better at it.

Now up and running with online ordering, delivery and/or pickup, many grocery retailers are taking stock of what they’ve learned to broaden availability, spur sales and sketch a road map toward profitability. That will mean building a critical mass of online grocery shoppers, scaling e-commerce and brick-and-mortar operations and making fulfillment more efficient to rein in costs.

“In the 2017 ranking, a lot of the major U.S. retailers hadn’t fully invested in online grocery yet. But over the last 18 months or so, we’ve seen a huge explosion in partnerships with third-party intermediaries like Instacart and Shipt as well as with other providers not dedicated to grocery, such as Google Shopping and DoorDash. That’s predominantly what has driven the growth of sales for most of these retailers over the last year,” said Doug Koontz, research director at Boston-based Edge by Ascential.

“In 2018, most of these players indicated that they’re now taking online grocery seriously,” he explained. “The scale of the operation has grown. Walmart grocery pickup is now available in 2,100 locations or more, Kroger in over 1,300 and Target in over 1,000. The footprint of online grocery pickup and delivery has expanded. But we’re not at saturation. For most of these top players, still less than half of their entire store footprint supports pickup or delivery of some kind. We can expect that as they learn and get better at this concept — in how to operate it, how to manage inventory and what types of shoppers they want to attract — they will expand it to more stores.”

Photo: Walmart is second only to Amazon, with $2.84 billion in online sales, including its grocery pickup available in 2,100 locations. 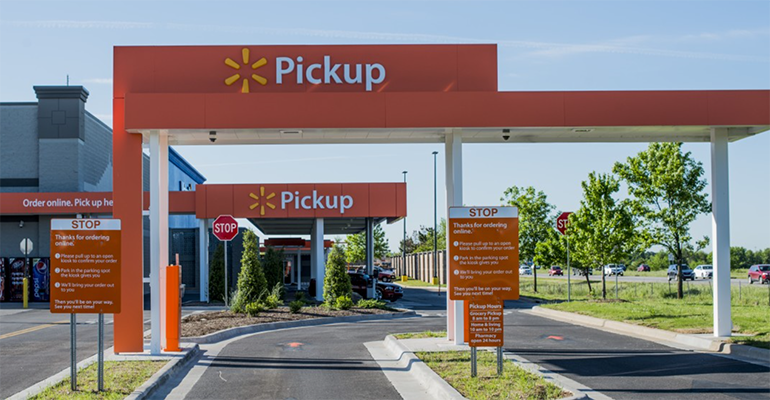 Kroger’s 66% gain from last year, the largest of the top 10 sellers, reflects the rapid expansion of its click-and-collect service and Instacart delivery, according to Koontz. “When you consider that they have more than 1,300 stores with pickup and another 1,600 stores with delivery through Instacart, that accounts for most of their growth,” he said. Some Kroger Co. regional banners, such as Harris Teeter, also see strong online sales, he added.

Another big gainer was Target, which grew online grocery sales by 28.9% to $422.8 million in 2018, Edge by Ascential estimated.

“They’ve decided that they’re going to be a grocery player,” Koontz said. “The Shipt acquisition has given them an opportunity to get products to customers’ doors much more effectively, and they’re being much more active and investing in their delivery capabilities. Target isn’t as big of a traditional grocery player as other companies on the list. But I’d expect them to continue to improve and grow. We’re not that far into this journey for Target.”

It was a tale of two cities for meal kit providers on the list. HelloFresh rose two spots to No. 5 on a 41% increase to sales of $956 million, while Blue Apron fell three spots to No. 8 this year as sales plunged 24.2% to $667.7 million. Germany-based HelloFresh is seeing robust U.S. growth, whereas onetime market leader Blue Apron has continued to struggle financially.

“The challenge Blue Apron and HelloFresh both have is that profitability will be an issue if their business model remains the same,” Koontz pointed out. “Even though their scale has improved, they weren’t making a ton of progress on profitability because so much of the cost is still embedded in getting the product through distribution and to the customer’s door.”

Going forward, Koontz expects retailers to follow a hybrid online grocery strategy, with some stores offering pickup, some delivery and some both, and third parties providing fulfillment services as needed. Only the biggest players — Amazon, Walmart and Kroger — will be able to build their own e-commerce infrastructure to do this themselves, he said.

“The industry — retailers and brands — likes pickup because it’s easier to make money and they can try to get shoppers into the store while they’re there. But once consumers get more comfortable with buying groceries online, I think their ultimate preference will be home delivery,” Koontz said. “How retailers balance that is going to be interesting. For now, I’d expect most retailers to take a store-by-store approach to identify new geographic areas conducive to home delivery or click-and-collect, and they gradually scale them as they go. But I doubt, even in the medium term, that we end up with grocery home delivery or pickup available in every single store.”