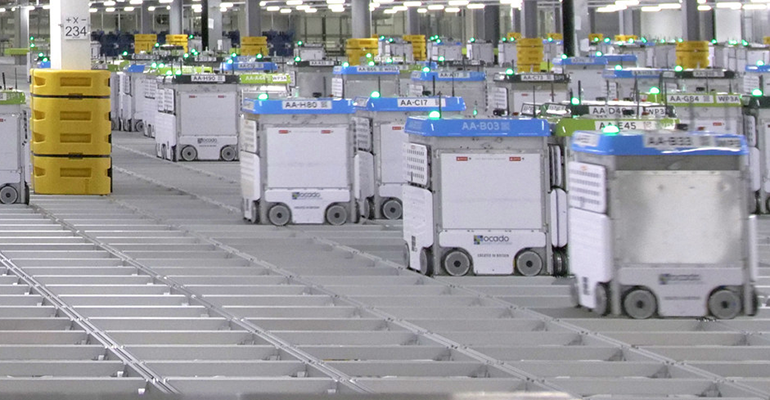 Kroger
The Kroger Co. named Monroe, Ohio, as the site of the first automated warehouse to be built under its alliance with U.K. online grocer Ocado.
News>Online Retail

Brick-and-mortar retailers are following up their push to put up an online grocery front end with investment in the back end.

Chains of all sizes are piloting and deploying automation and robotics solutions to build smart, efficient operations and infrastructure geared for e-commerce. Industry observers expect these efforts to mount over the next year as grocery stores hone their omnichannel capabilities to close the gap with tech-savvy Amazon as it integrates more closely with Whole Foods Markets.

“I think automated fulfillment from the store level, particularly when it comes to center-of-store items, is going to be meaningfully important on a go-forward basis in order to cover all of your fixed and operating costs for the four walls,” Jefferies analyst Christopher Mandeville said at a Supermarket News roundtable discussion.

Leading the charge are big players like The Kroger Co., which in November named Monroe, Ohio, as the site of the first automated warehouse to be built under its alliance with U.K. online grocer Ocado. Plans call for Kroger to have ordered three of these “sheds,” which feature digital and robotic capabilities, by the end of 2018 and to deploy 20 of the facilities during the first three years of the agreement. For online grocery delivery, Kroger also is piloting self-driving vehicles from robotics and artificial intelligence (AI) specialist Nuro in Scottsdale, Ariz.

A few weeks before Kroger’s announcement, Albertsons Cos. unveiled a partnership with e-grocery automation startup Takeoff Technologies to test a hyperlocal micro-fulfillment center at one of its stores. Takeoff’s AI-enabled robots can collect items for online grocery orders in minutes.

Also working with Takeoff are Miami-area grocer Sedano’s Supermarkets, which is piloting an automated fulfillment center with 14 of its stores, and Ahold Delhaize USA, which is using Takeoff’s technology for mini robotic warehouses serving its Peapod online grocery arm and chains such as Stop & Shop.

Ahold Delhaize’s ability to invest in technology and roll out omnichannel improvements gives it an advantage in its East Coast U.S. market, according to President and CEO Frans Muller. “Not every player can afford these investments,” he said. “There will be more consolidation in the industry for smaller and midsize companies.”

Not to be outdone is Walmart. The retail giant is engaged in a range of automation and robotics initiatives. In October, Walmart said it plans to build its “first high-tech distribution center for fresh and frozen groceries” in Shafter, Calif. Using robotics from Witron, the facility will process 40% more products than a traditional DC and is due to open in the fall of 2020. Walmart also has teamed with Alert Innovation in a test of its Alphabot robot to help fill online grocery orders faster at its Salem, N.H., supercenter. Another pilot in Chandler, Ariz., is using autonomous vehicles from Waymo (formerly Google’s self-driving car project) to pick up customers at their homes and take them to the store to collect their online grocery orders.

Robots are being put to work in-store as well. St. Louis-based Schnuck Markets has deployed shelf-scanning robots at around 15 stores. The Tally robots from Simbe Robotics roam the aisles to scan over 1.5 million products daily, giving Schnucks deeper insight into product flow and store operations.

“As a result of working with Simbe, we’ve experienced a phenomenon we call ‘the Tally effect,’ an immediate improvement in in-store operations and increased teammate productivity,” said Dave Steck, vice president of IT infrastructure and application development at Schnucks.