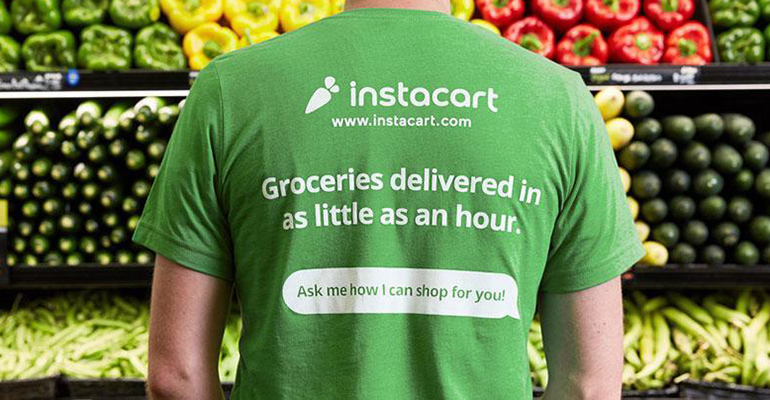 Instacart continues to raise eyebrows as its presence grows across the grocery space. One of the drivers behind the online grocery delivery provider’s swift expansion is Nilam Ganenthiran, chief business officer.

Ganenthiran (left), who joined Instacart in 2013, just over a year after it was founded, has championed the San Francisco-based company’s business model as an e-grocery enabler for supermarkets. The laser focus on software and logistics has helped Instacart quickly align with hundreds of grocery retailers — especially since Amazon’s 2017 acquisition of Whole Foods Market — and become the leading third-party grocery delivery platform.

“Our retailer partners are the experts in pricing, assortment, running their stores, marketing, etc. Our orientation as a company is technology. That’s a really important nuance versus other services out there,” he told SN last year. “We don’t compete with our retailers; we partner with them as a service provider. And we’re not owned by a parent that sells groceries. That helps us be far more clear on the mission, and it allows us to move a lot faster from an innovation perspective, when the entire industry is competing against this behemoth that is also a great innovator in Amazon.”

Currently, Instacart works with over 300 retailers, representing more than 15,000 grocery stores in 4,000 cities, and serves a dedicated base of 70,000 shoppers. Major retail partners include Kroger, Albertsons, Publix, H-E-B, Ahold Delhaize USA, Costco and Aldi. Instacart’s service is accessible to more than 70% of U.S. households, including all 50 states, and to over 50% of Canadian households.

Canada has been a recent expansion thrust. In the fall, Instacart unveiled plans to build Instacart North, a new technology hub in Toronto due to open in 2019. Just a couple of weeks earlier, Instacart announced delivery pilots with Walmart Canada, the first time its service was offered via the Walmart banner. “We’ve had a very busy year, hitting new milestones and becoming the North American leader in online grocery,” Ganenthiran said in an interview at the time.

In early November, Instacart kicked off the national launch of Instacart Pickup. The click-and-collect service is set to roll out to nearly 200 grocery stores in 25 metropolitan markets. “I’m excited to work with our existing retail partners to now offer Instacart Pickup and look forward to adding more grocers over the coming months and expanding this service to even more families,” Ganenthiran said.